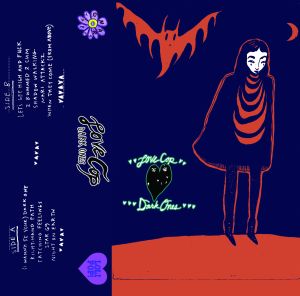 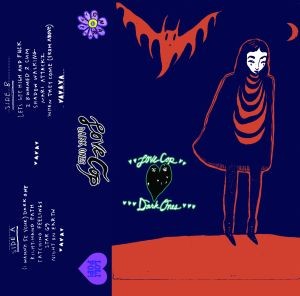 Long Island via Portland duo Love Cop return with their third release of dark, lo-fi stoner pop to get you in the mood.

The hazy beats and dreamy atmospherics of Dark Ones is full of sexual angst, but with a mixture of tenderness and humor that is never aggressive or off-putting. As with the earlier Eat Yr Heart Out classic Gettin’ High In the Graveyard, which featured the line “I’ll bring red wine/ You bring protection/ I may seek death but not infection”, there are similarly themed laugh out loud lyrical extemporizations in 2 Bummed 2 Cum (“I wanna get laid when I get laid to rest”). Despite this apparent coarseness, however, Dark Ones is a true romantic idealist, weary of fucking its soul away without feeling and the unfulfilling emptiness it brings.

Lead single Let’s Get High and Fuck, a collaboration with Brian Wakefield of Emotional, is a seductive daze of melancholic 80s electro. You’ll probably be too busy swooning to notice Phil Salina’s sweetly glum vocal assuring his girl he doesn’t even mind if she stinks a bit when they fuck in the backseat of her daddy’s truck (and if that isn’t the very definition of love then I’m not sure what is…).

The dancey thump of Star 69 is like an interstellar orgy in a future room hotel suite, and considering the recurring alien motif in Dark Ones’ other songs (the fuzzed out Ramones surf groove of Mars Attackz, When They Come (From Above)), perhaps the album is actually more sci-fi than horror. “Believe in love” is whispered over and over during its final moments like a subliminal prayer to some distant star lord, or a transmission from a lonely communications satellite orbiting infinitely through space in the naïve hope of some real connection. The X Files “I Want To Believe” poster in Fox Mulder’s office comes to mind, and if you spend enough time with Dark Ones, you’ll want to believe too.