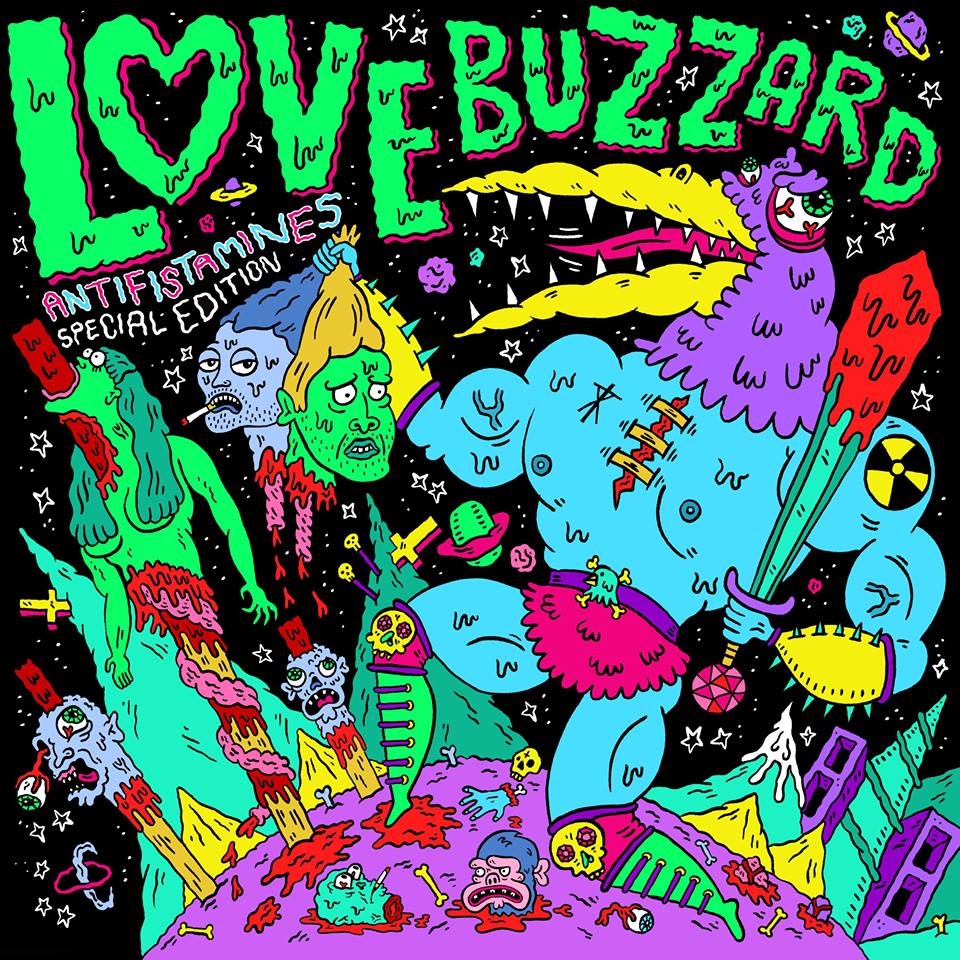 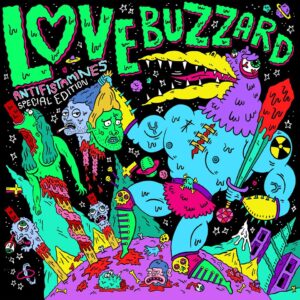 What happens when there is a three-way crash between rock, metal and punk? Well, the resulting, high-octane carnage might well sound like the début album from London band Love Buzzard, ‘Antifistamines’.

Due to be released on established punk label 1-2-3-4 Records, on February 12th, frontman Kevin Lennon and drummer Al Brown, have made a ballistic arsenal of tracks to assault the ears and raise the temperature. With fitting gruesome, brain-worm ridden art work from Russell Taysom, this 13 track offering has enough frenzied power for any speed-punk aficionado.

The first track, ‘Cash’, is shouty and punky, with a chorus reminiscent of ‘Holiday in Cambodia’ by the Dead Kennedys. The track is riff heavy with ragged-round-the-edge vocals and even the slower section hardly gives time for the heartbeat to slow before the pace gains speed and spunk again.

The thumping introduction to ‘Headrush’ builds into a rhythmic speed-freak of a track leading to an ear-splitting crescendo of sound, whilst ‘Beams’, is still punk, but has more of a straight rock vibe pushing through. The drums of Al Brown are the driving force and the vocals are clearer on this solid track.

The rock/metal feel of ‘Creep and Crawl’, another strong offering, contrasts with the Cramps-like feel of ‘Passion’, which has a sprinkling of speak-easy charm added to the other, more typical Love Buzzard cocktail of speed punk, thrash metal and good old school rock.

‘Superglue’, arguably the best track on the album, soars well above the average. Catchy punk riffs, crazed vocals and a sing (or shout) along chorus sear this one into the memory. Perhaps the worms in Russell Taysom’s art are ear-worms, Love Buzzard songs that have burrowed their way in, only to be set free in the most grisly circumstances. If the chorus ‘I’m gonna glue myself to you’ swirls endlessly round your brain, there could be one making itself at home in your aural cavity right now.

‘Wild’ slows the tempo a little with initial strummed guitars, then the dirty rock gets heavier, before the softer, moody guitars kick in again. The mood doesn’t last long, though, as ‘Give It Some Range’ hits the top of the punk tempo scale. Wild and barely controlled, this is a fire cracker of a song.

There is less crazed rock to ‘Heaven’s Got an Electric Fence’ and more of a cleaner, clearer feel. The guitar sound sees hints of surf and Spanish/ gypsy rock brought into the mix, although Kevin Lennon’s vocals are as out there as ever.

‘Origins’ has more fine rock riffs and feels slower than many of the tracks initially, before picking up speed to hurl itself at a musical brick wall at the end, whilst ‘Antifistamines’, with its distinctive rock guitar phrases and strong vocals is another memorable piece.

Yet again, the screaming guitars echo vocals which seem to teeter on the verge of mania on the penultimate track ‘Lines’. There are some pure rock guitars here, but they don’t completely dispel the overall punk feel. ‘Tower’ rounds things up with nice, clean guitars to begin on this riff-laden finisher, which changes between guitar-dominated sections and speed punk throughout. A fitting ending to a powerhouse of an album.