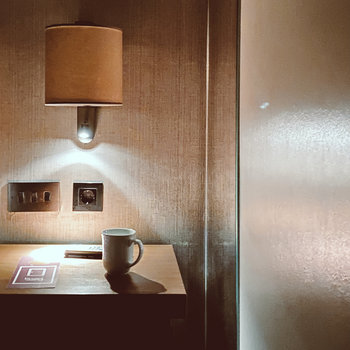 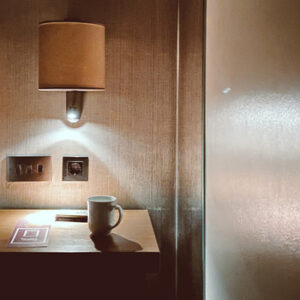 Along with its B-side Parade Of Shops, West Riding Telegraph Engineer is a trailer for the forthcoming second Lounge Bar Orchestra album due later in 2022. This pairing finds the band’s head honcho Reg Omeroyd taking a step away from his famous theme and incidental music compositions for Ousewater Television and instead takes in homages to a mixture of influences. Ian Canty shins his way up the telegraph pole…

Like many doyens of library music, Reg Omeroyd didn’t content himself in only producing content to accompany tv programmes. We’ve heard his Ousewater Television recordings over a number of Lounge Bar Orchestra releases, the last of which was the great E.N.L.I.G.H.T.E.N.M.E.N.T. single album from 2021 (reviewed here) which followed their fine first LP Pilot Episodes (read more here) from a year earlier. Now we can hear the first evidence of the wider range of Reg’s music with this new single West Riding Telegraph Engineer/Parade Of Shops.

In late 1971 Reg and his Lounge Bar Orchestra dutifully trooped along to the NEPP Archibald Recording Studios in the market town of Shipley, West Yorks, in order to set on tape these two offerings. In addition to the usual LBO crew, they had guest stars Stanley Wax at the keyboard and flautist Maximilian Traut “sitting in”. The recordings were satisfactorily completed, but a release at the time was not to be. The story could have ended there and both items would have been lost forever, but fortunately a sharp-eyed brickie identified the tape as something of interest whilst removing a false wall at the building that once was NEPP Studios. Hopefully these renovation works may yet yield further gems, but for the moment we just have the pair of tracks that comprise this download-only single (a vinyl release is to follow).

The title itself West Riding Telegraph Engineer does strongly evoke the idea of a Yorkshire version of Glen Campbell’s Wichita Lineman. Glen’s recording of the Jim Webb tune definitely provides a faint echo in the stately pace and lush musical landscapes here too, as The Lounge Bar Orchestra attempt to pinpoint a similar ambience to the crack US studio outfits of the 60s and 70s. It is soon established that what Reg and The LBO lacked in terms of budget and facilities available to say The Wrecking Crew, they sought to make up with their own fully-formed vision and good old-fashioned North Country gusto.

(In lieu of any video available for the two single tracks, here’s Lounge Bar Orchestra’s unique version of The Kinks’ I Go To Sleep)

A graceful introduction to West Riding Telegraph Engineer is just dreamy ear candy and the beauty of it gentle unfolds during its four minute duration. There’s something so soothing, but moving about Lounge Bar Orchestra’s work here that makes the melody positively gleams. Stanley Wax’s organ tones are applied with the touch of a master, making him a key element in LBO’s overall impact on this single. It’s such a satisfying combination that successfully builds on Lounge Bar Orchestra’s previous releases in a singularly inspired manner.

For its part Parade Of Shops begins with the kind of delightful flow that marked the best 1967 orchestrated psychedelic pop, until sumptuously warm keys with a bright undertow take the lead to guide us to somewhere else entirely. On the face of it, this is a rum mixture indeed. But everything works and pays off immediately, with this listener experiencing the vague shadows of happy, colourful days gone by, of good memories that linger just beyond my feeble brain’s recall. Mr Traut comes into his own here, expertly utilising oboe, flute and even the bassoon, helping make something memorable and totally loveable too.

West Riding Telegraph Engineer/Parade Of Shops acts as the perfect taster to the next Lounge Bar Orchestra album. But more than that, they are both excellent examples of Reg Omeroyd’s (or in the real world, Greg Healey’s) wonderful knack for inspired composition, gorgeous arrangement and imaginative realisation. This is truly fine music that will only grow in stature with repeated plays, music that made me feel substantially better after I listened to it…and after all isn’t that really the point? In this form LBO are simply irresistible purveyors of some of the finest pop music out there today.