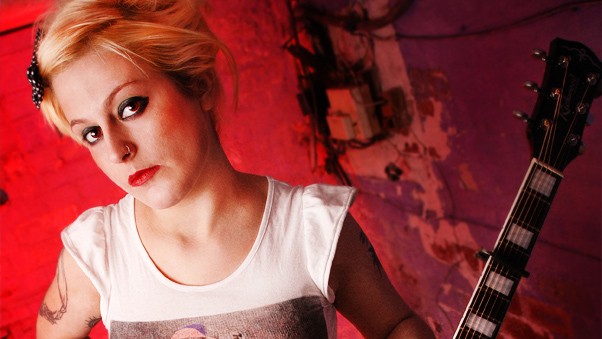 One artist I can’t stop banging on about this year is Louise Distras. A previous holder of ”Ëœartist of the day’ on Louder Than War, ferocious punk from Wakefield, Distras is gutsy, raw and full of things to shout about. With outlaw spirit she’s been relentlessly playing gigs all over the UK and Europe in typical renegade spirit and doesn’t show any signs of stopping any time soon. As well as playing gigs supporting New Model Army and Mike Scott already, Distras is to be performing at both Rebellion and Strummercamp for the second year running this year. You might have even recognised a brother from a certain famous Wakefield band parading around in her merchandise over the past few weeks, most notably in NME.

A couple of weeks ago her debut single ”ËœThe Hand You Hold’ was released for International Womens Day showing off her bravado and empowerment. The brilliant video that accompanies the track compliments the song in a true punk sense, highlighting the anger and energy reflected in Distras’ music. This single is taken from Louise Distras’ forthcoming debut album expected to be released in late 2012, engineered by Pat Collier (New Model Army, X Ray Spex, Maximo Park) andÃ‚Â ”Â¨produced by Steve Whale at Perry Vale Studios in London.

I certainly can’t get enough of her. Her live shows are seemingly injected with passion and raw power and she is certainly an artist to check out on the circuit this coming year.