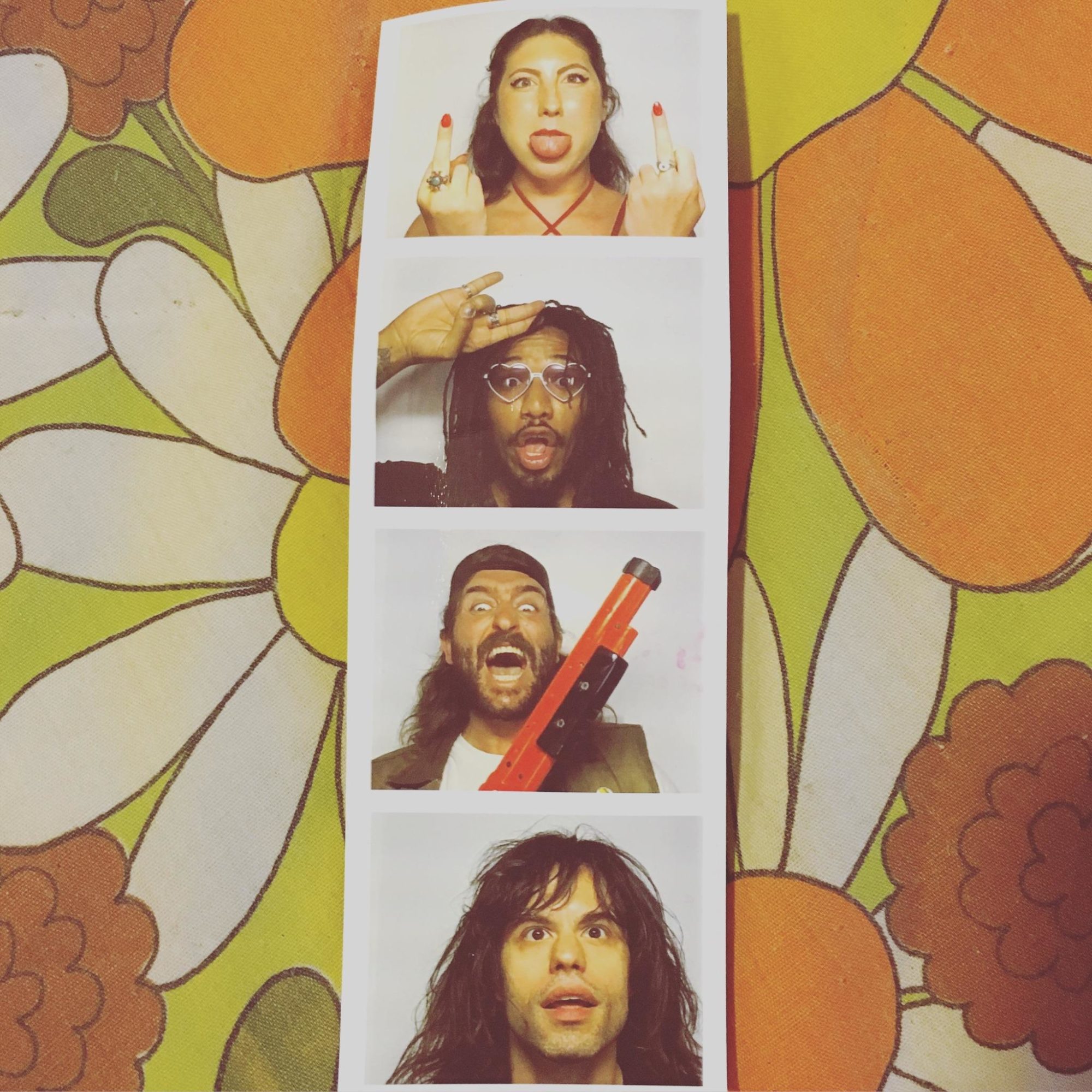 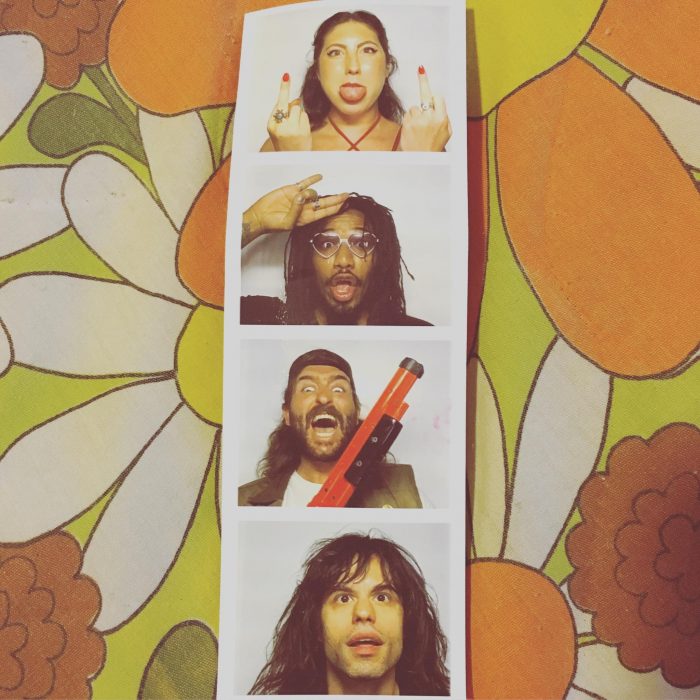 Louder Than War’s Carrie Quartly interviews TOWER, an up and coming New York hard rock/metal band bringing the legacies of Dio, Iron Maiden and Judas Priest screaming into the present with their powerful shred. Their new song “Party (Ready To Roll)” premiered this week via Revolver Magazine.

Sarabeth: Zak and I were in a band together called Dog Food. When I quit, Zak and the drummer Joey followed me. I brought in James and he really vibed with Zak.
Zak: I was in a project with SB prior to this incarnation of TOWER and when that went up in smoke I still wanted to continue the project. I asked her if she wanted to put something together and she immediately thought of James. In our first session together we planted the seeds for the first three songs right away. James knew Philippe from Glamour Girl. I went to LA for a month, these guys played and by the time I got back, it was apparent that this was the lineup.
James: The original drummer Joey Bouchard stayed long enough to demo our first 3 songs, which took place on Memorial Day weekend 2015, one month after we started. Joey left the band as soon as his tracks were finished. Keeping with this fine tradition, our most recent drummer Jesse ‘The Raven’ Balgley flew the coop in August and is now in St. Louis to earn his doctorate in physics. He’s still doing his distro Stygian Black Hand and has two bands, one called Spite and another called Horns and Hooves, so you’ll be hearing more from him. Lucky for us, Justin from Blackout and Somnuri is reclaiming the throne (for now). He kicked ass on the album and we’re glad to get him back onstage!

Congratulations on signing with The End Records last month. How did you connect with them and are you familiar with any of the other releases in their catalog?

JD: Thanks! Tournament deserves a lot of credit for getting us the label’s attention.
SB: They came to a show we played together at Union Pool. The A&R guy, Logan Butler, really liked us and followed up on it.
JD: Logan and Andreas scouted us live a few times after that. The End seemed genuinely interested and less likely to lose us in the shuffle as opposed to some others who approached us. Voivod and Fear are two of my favorite bands to have worked with them.
Z: Krokus and Agalloch, and I think it’s pretty cool that The Zombies are on the label as well.

How long have you been operating as a band leading up to making this album and when can we expect it to come out?

JD: We started recording the album in January, at that point we’d been playing for nine months.
SB: We’ve only been a band for less than a year and a half. The release date is October 28th.

Sabbath, Dio, Priest and other 20th century giants of rock are obvious touchstones in your sound. Do you think the immortal spirit of these kinds of groups is something we’re missing in current music?

Z: Yes, we’re missing authenticity in current music. It seems like everything is derivative and the type of music I’m drawn to is raw, immediate in its punch, and stands the test of time. It’s not over done, over picked, or over played. That’s what makes it powerful.
SB: I believe there is a revival happening. Maybe not quite the same type of heavy metal, but I really believe people want to hear pure rock and roll again.

It seems like a heavy metal uprising is stirring as an antidote to the self-conscious indie rock and obtuse, pretentious twerps of the city with local bands like Tournament, Natur and Blackout (not to mention out of state acts like Danava, Hot Lunch, The Shrine, Lecherous Gaze, etc.). Do you see these bands as kindred spirits and allies? What are some of the bands that inspire you?

JD: Tournament, Natur and Blackout are fam! We’ve been friends a long time. You could call it a scene, but there’s a real sincerity to it. We all would be doing what we do no matter who else was or wasn’t. Mammal, Chain and Filth Hound belong in there, too.
SB: Anything that’s pure and real is cool with me. Especially Holy Grove and R.I.P. from Portland.
Z: Autowreck!

Sarabeth has an incredible vocal range, and she masters rasp and vibrato techniques in a truly commanding way that echoes hard rock titans like Dio and Joplin. I know she used to be in a Dio cover band called Holy Diva. What was that like?

SB: Thank you!!! It was purely for fun. We tried to write our own music but we didn’t really vibe well when it came to writing.
JD: It was me and SB, Jon Lane of Godmaker on drums, and Nick Cageao of Mutoid Man on bass. Nick, Jon and I had a band before that called Bröhammer along with Jeff Filmer on guitar, who engineered and co-produced the TOWER album. Holy Diva lasted about a year and we played the following songs live at least once: Love Is All, We Rock, Holy Diver, Kill the King, Man on the Silver Mountain, Neon Knights, Children of the Sea, Heaven and Hell, Die Young, The Mob Rules, and Falling Off the Edge of the World.

There’s a technical virtuosity to Danzo’s guitar playing but it never overshadows the enjoyment of the songs, which I feel is important. Have you been classically trained as musicians at all or are you self taught?

JD: Thanks! I started taking lessons when I was 9 years old but got bored and didn’t stick with them as long as I should have. I’m not a master of technique but it’s important to have enough up your sleeve to express what you want. Most recently I took lessons from Andee Black who is the best guitar player, period.
SB: I started vocal lessons senior year in high school. I was involved heavily in the chorus, school plays, NYSMA and the town philharmonic. I continued lessons up until senior year.
Z: I was never really trained on guitar, I’m strictly what James would call ‘street’, but I did play the saxophone for a number of years, and my grandmother was a piano teacher, so music’s always been around.

I always appreciated the timeless rebellion and flamboyant charisma of heavy metal music and how it has made disapproving parents and rigidly conventional people paranoid since its inception. There’s a lot about the satanic panic of the 1980s with Ritchie Blackmore supposedly astral projecting into the crowd at shows to do mischief, and that fantastic 1986 supernatural horror film Trick or Treat where fictional rock hero Sammi Curr sends Marc Price messages from beyond the grave. Of course in the end, it’s just a lot of fun, but do you think this traditional devilish/occultish imagery adds to the mystique of the music you’re playing?

Z: I haven’t been able to successfully channel Satan just yet, but until then, fuck the squares.
SB: I’m not into the devil. When I sing about the darkness, it’s more personal and goes deeper than a red evil character that lives beneath us.
JD: Accusations of devil worship in rock go back at least as far as Robert Johnson. What’s truly scary are the people who consider rock n’ roll a sin.

When you play live, what do you want the experience to be like for the audience? And how does this differ from sessions at the studio? Was it easy to capture the fire of your live performances on tape for the upcoming album?

Z: Our live performances are where we thrive for sure, to have that immediate up-close connection with the audience is fuel on the fire. In the studio we are aware of that and we are working at trying to channel that energy. We want people to forget everything else in their lives for a few minutes and let loose.
SB: I like to see people’s faces react when we play. It contributes to my performance and almost gets me off. If they’re not reacting then I’m not doing my job.

Tell us a bit about your teaser track “Elegy”.

SB: This song is about the suffering you endure when you play with darkness.

Finally, what’s next for TOWER? Do you have any upcoming shows or band developments you want to share?

JD: Right now we’re acclimating to being signed and dealing with deadlines, management, agents, and all that fun shit. But most importantly we’re writing, jamming, and planning constantly. Half the next record is already written and demoed. A November tour of the Northeast and Midwest will be announced sooner than later. The record release party takes place October 22 at Shea Stadium with Tournament.