Home Blogs Louder Than Words Festival: countdown to the start 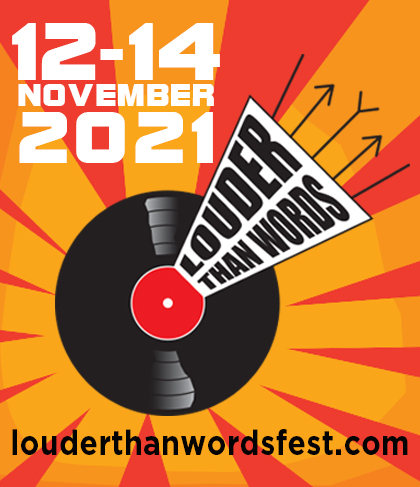 A celebration of music and writing, Louder Than Words Festival will kick off this Friday.

As always, the programme is brimming over with events that would make book lovers experience a bittersweet heartache. Luckily, this year, panel discussions, conversations and performances will be live-streamed and accessible from different parts of the world.

The festival will open with Buzzcocks Panel Discussion, dedicated to a recently published Ever Fallen In Love: The Lost Buzzcocks Tapes. Three panellists have firsthand knowledge of the band. John Maher and Malcolm Garrett were contributing drumming and design respectively. Being a long-term fan and then an official biographer, Louie Shelley diligently recorded her phone conversations with Pete Shelley, telling stories behind his songs.

With the majority of events scheduled on Saturday, the programme of this day focuses on feminist writing and memoirs. The author of She’s at the Controls Helen Reddington will talk about the role of women sound engineers in the British music industry. From Australia via live stream, Leslie Chow is going to present a concept of The Twelve Strangest Women in Music from her book You’re History.

The memoir section is introduced by Will Sergeant, talking about his brilliant Bunnyman, and Barry Adamson, presenting an autobiography Up Above the City, Down Beneath the Stars. The latter will be doing a solo set after the conversation. With a focus on the visual aspect and an introspective approach, Kevin Cummins will be conversing with John Robb about Juvenes. The exclusive book of the artist’s photography displays the legendary as well as less known shots of the Joy Division, accompanied by interviews with Bernard Summer, Peter Hook and Stephen Morris.

The Sunday programme will begin with the conversation between author Daniel Rachel and host Heath Common. With a hauntological prospect, Rachel’s book Like Some Forgotten Dream daringly deconstructs the well-known story of The Beatles. “What if the Beatles hadn’t split up?” questions Rachel.

These and more are in the updated schedule which is available on the festival’s website.