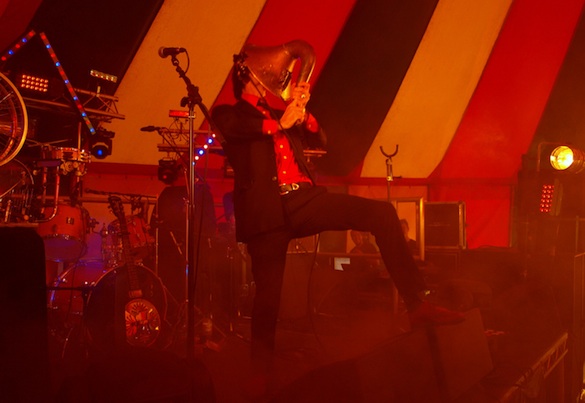 Photograph of Thomas Truax above courtesy of Paul Maps @ joyzine.org.

Fans of quirky one man bands and experimental music made with loop pedals, homemade instruments (esp ones with names such as Mother Superior and The Hornicator) and the occasional guitar should be prepared to give thanks – there’s a new Thomas Truax album in the offing! And we’ve got a first taster to share with you off it today, in the form of a video for lead track ‘Always Been A Dreamer (Blues)’.

Not only has Thomas got a new album, titled Trolls, Girls and Lullabies, in the offing but (you won’t be surprised to learn) he’s also got a series a live dates lined up too, full details of which you can find below. Thomas is one of those musicians who like to be on the road, normally totalling over 100 shows a year, so there’s a good chance you’ve seen him live before – but if not you’re implored to rectify that this spring!

Summing Thomas up in one sentence for people who aren’t familiar with his skewed genius the press release announcing the news says:

“As a figure in modern musical culture Thomas falls somewhere between the post blues surrealism of Tom Waits, the theatrics and story telling of artists like Jeffrey Lewis and Rufus Wainwright and the sonic experimentation of post punk/noise acts such as New York contemporaries Liars.” 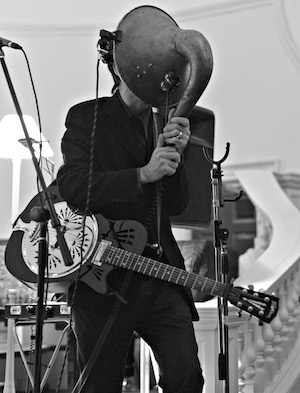 …which, although accurate to an extent, doesn’t really do justice to the fact that there are no others like Thomas Truax – he is unique.

Famous fans of (and collaborators with) Thomas include Jarvis Cocker, Duke Special, Amanda Palmer and Brian Viglione of the Dresden Dolls. The author Terry Pratchett is also a fan and a meeting with director David Lynch resulted in the highly acclaimed 2009 covers album Songs From The Films Of David Lynch.

Trolls, Girls and Lullabies is a specially commissioned soundtrack to the theatrical masterpiece Peer Gynt by Henrik Ibsen. The production has been incredibly successful thus far, so much so it persuaded Truax to axe plans to release the album he was already recording in favour of this soundtrack.

About Trolls, Girls and Lullabies, which is typically bonkers and trademark Truax, we’re told:

As well as a brand new self-made instrument, ‘The Saxogramophone’, ‘Trolls…’ features a typically eclectic array of source material from the music of Greig’s original orchestral score to Rolling Stones covers and original compositions. It’s as thrillingly diverse and lovingly crafted as any Truax opus and we could wax lyrical forever but who better to explain the work than its creator? See overleaf for a Q&A with Thomas on the work, its origins and creation as well as its message.

Turning to the play itself, here’s what Thomas has to say about it:

It may be an old play but the underlying story is familiar enough in this age of Facebook: a man running in circles bent on becoming wealthy and becoming a king of something (exactly what doesn’t even matter). Like a hamster in a wheel, searching for himself, his identity.  Along the way you get blues, rock, surrealism, nightmares, trolls, love, beauty, death and other weirdness, all that stuff that songs are made of. The songs come from pretty basic emotions that the characters are experiencing, or are there to create an aural atmosphere. Most times we don’t have to know the story behind a song to get an impression of what it’s about. Like the intro track suggests, whether you like it or not, there may be a little Peer Gynt in all of us.

And so, with no further ado, check out the new Thomas Truax video:

And for the following dates Thomas Truax will be on the same bill as Bob Log III:

Thomas Truax’s website is here: thomastruax.com. He can also be found on Facebook and he tweets as @thomastruax.