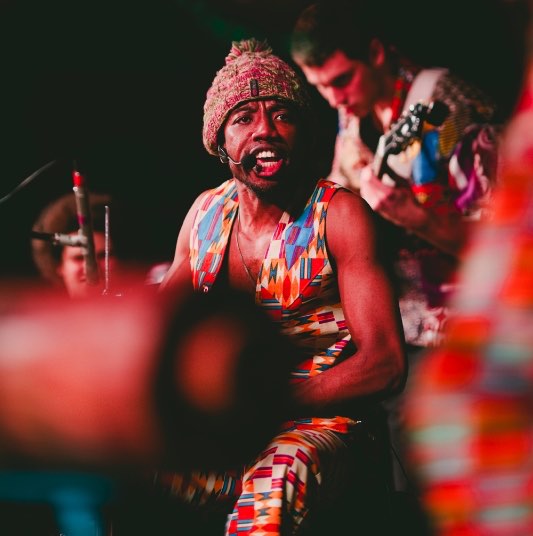 Fela Kuti has been very much in the news of late with the soon to be released documentary about his life and the upcoming re-release of six of his best albums on vinyl (see our article about these here.) As fans of Afrobeat in general we’re always on the look out for new artists carrying on the work of the great man and to that end we’d like to introduce you today to new bandleader and drummer Paa Kow by premiering a track off his new album, due out next week.

Before we go any further let us point out the obvious – Paa Kow knows how to drum. As everyone who knows anything about African music knows, the drumming, more so than most other forms of music, forms the backbone and beating heart of it. It’s this that makes the music such a captivating and bewitching listen  – and that’ll make you want to dance along to the infectious rhythms. Not that the brass and guitar work on show here aren’t great too – they are, and this is definitely more than a “sum of it’s parts” package.

Paa Kow’s music isn’t all about Africa though, he manages to blend those tradition African beats with American and Caribbean music to0, not to mention jazz of course. This is proper fusion music, as you’ll find out when you click play on the track below.

“Having toured internationally, sharing stages with both African and American luminaries including Kojo Antwi, Hugh Masekela and Victor Wooten, Ghana-born drummer / bandleader Paa Kow (pronounced Pah – Ko) came to America in 2007 when he was invited to be a guest professor / performer at the University of Colorado. Inspired by his musical and cultural exchange with artists in the U.S., Paa Kow and his orchestra fuse traditional rhythms, time signatures, and the Fante language from Ghana with funk and jazz to create an Afro-Fusion sound set apart by its “flexibility and finesse” (Modern Ghana).”

The album’s titled Ask and is due out on the 19th August.