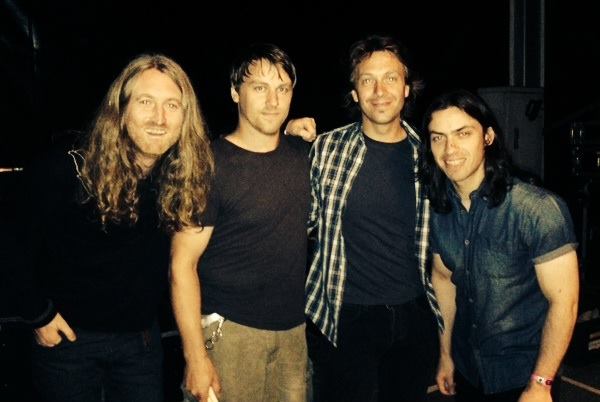 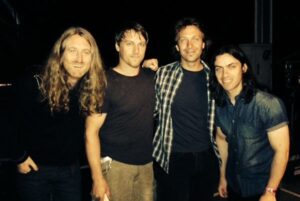 Louder Than War’s Kat Ball recently caught up with singer Cormac and guitarist Paul from The Answer at Hard Rock Hell 2013 to talk about huge tours, their albums, and where they might have been if they hadn’t made music.

Louder Than War: Is this your first time at Hard Rock Hell?

Cormac: It is! We haven’t seen an awful lot of it yet; we were rushed through to do a signing and then over for press. It’s the last night of our tour tonight, so obviously later we’re gonna be in end of tour party mode.

For those that are unfamiliar with you, the band has had quite a career so far already, with awards and album praise. How has that been?

Cormac: I don’t think when we started, we thought it would take us all of the places it has. I think in the beginning we were happy just to go and put out a record, and everything after that was a bonus. We got really lucky, the first album Rise did really well, we got to play with some amazing bands, got to tour with AC/DC, and we’re on album number four now.

You mentioned the AC/DC tour, how was that?

Cormac: It was ok. Ha ha. It was a little scary at the start, but I’ll never forget stepping up on stage for the first show and thinking “we get to do this for a year and a half, this is gonna be some year and a half!” You have to learn fast in that situation, I think we did, and within the first few shows we were working quite sizeable crowds, and it was an arena tour, then it developed into a stadium tour. So we played in front of some wacky amounts of people!

And what did you find that you learned on those tours?

Cormac: You learned how to communicate with that amount of people, that the simplest gestures go a long, long way, and that you have to be in love with what you do or it will all fall apart. It’s rigorous demand, on a tour of that magnitude, and any tour is really.

So as you mentioned, you’re just finishing up a tour of the UK with the new album New Horizon, how has the reception to it been?

Paul: It’s been good. When you do a new record, even when you know it’s good yourself, you’re always on tenterhooks waiting to see if people like it or not, or like it as much as the old stuff. The first reaction makes you kind of nervy, but it’s been really good feedback. We’ve probably had our best radio coverage ever, playing the new songs on tour seem to have been going down the best. The set is maybe 60-70% new, and when you have four albums, there’s a lot to choose from and a lot of old songs people want to hear. You’re kind of taking a chance playing that many new songs, but it’s gone down well!

You’re a band that has quite a dedicated following. Those that seem to love you really love you, and you don’t struggle to fill venues in most cities, so what’s next? Do you want to stay close to the fans and not see the barrier so far away, or do you want to go bigger and bigger?

Cormac: We have no problems playing stadium tours back home! But you’ve gotta keep aiming higher, that’s part of what drives you on, it drives your song writing on, and the stage show, I don’t think in the music business you can ever just be happy with what you’ve got.

And where do your musical influences come from?

Paul: I got into a lot of Eighties metal, Motley Crue, Guns ‘n’ Roses, anything that was on the Sunset Strip I was into, Metallica as well, and of course AC/DC, and I think we all had a period in the Nineties where the grunge thing was happening, so that was what we were listening to when we were having our first beers, all those coming of age experiences. And when we heard bands talk about Led Zeppelin, we’d go back and check them out and find maybe that’s better than what we were listening to. And then those guys would talk about the blues, and that would take us further back.

Being from Ireland, family can often have a set path for you, in that they hope you’ll become a doctor, or a priest. What life did they have planned for you before you decided to go and make music?

Cormac: Four priests! We keep the collars hidden away in the back of the tour bus!

But they must be really proud of you now. They don’t want you to give it up for the calling?

Cormac: No, we’ve been lucky. I think in the very early days there were a few questions asked. Paul’s father was in a very successful band, so he kind knew about the pitfalls that lay ahead.

Paul: Yeah, he’d rather I was going to do something else, but once they see that you stick at it, and deal with all the other things, and that we were actually quite good, he was like “Alright, maybe you can do it!”

Do they come to the shows?

Paul: Yeah he came to a few shows, AC/DC in Dublin, so that was a proud moment for him.

Cormac: The guest list for the Belfast show is still a bit of a nightmare!

So how would you describe yourselves for people that haven’t heard you yet?

Paul: We’ve definitely got roots in the blues I think, but we go much further than that. I think with the new record, there’s definitely a harder edge, a heavier edge. Things from the Seventies, Led Zeppelin and Free. Things from the Nineties like Soundgarden, it’s hard to describe!

Cormac: I think in a nutshell, it’s hard rock with a lot more soul than most of the hard rock bands around right now.

And lastly, what three words would you use to convince people to check you out?

Paul: Can super sexy be one word? Supersexy rock’n’roll. My tongue’s firmly in my cheek there, ha ha.

Well enjoy the last night of the tour, and thanks for taking the time out guys!