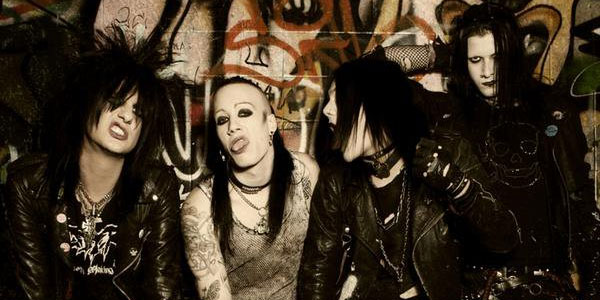 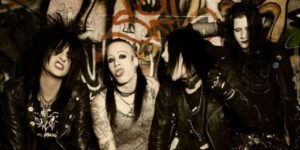 Louder Than War’s Kat Ball talks to Jamie (vocals) and Cari (drums) from Swedish band Sister at this year’s Hard Rock Hell about their sound, big hair and spandex and how they connect with fans.

Louder Than War: Thanks for chatting with us today guys! Is this your first time in Wales?

And how are you finding the cold?

You played with Wednesday 13 on a few dates this week after touring the UK with them already this year, how is the relationship there? How did you end up meeting?

Jamie: Well, our booking agent called us and asked if we wanted to play with Wednesday 13, and we said yes, of course.

Cari: It was a combination; across the bands the fans like the same kind of things. We had a good time on that first UK tour, and we already started to talk about other dates in Europe and he asked us to join him. He’s a really great guy, the whole band are all great. We had some fun times together!

So for those who are unfamiliar with your music, what are you all about?

Cari: Yeah, punk-metal image, kind of dark, we don’t have any bands that we say, “oh, we’re like this or that”, we’re trying different genres.

A number of years ago you had the big hair and spandex going on, back when MySpace was still a great way to find bands.

Jamie: Damn, I miss MySpace! You had like one page, here you go, and this is us.

How do you use promotion these days without something like that?

Jamie: To have your own website is important, but I think it’s Facebook that’s the most important one.

Do you find you get a lot of interaction there and new people listening to you through it?

Cari: Yeah definitely. I kind of love it as much as I hate it!

Jamie: That’s the funny thing about Facebook nowadays, it’s all about the likes. These days you can buy the likes. I think people look too much at the numbers.

So, why should people come and see Sister?

Cari: Because we’re putting on a hell of a show.

Cari: There’s not so many bands like us out there. We wanna have the punk fans, the metal fans, everyone!

And when you say you want to reach out to so many people, where do your musical influences lie?

How do the shows in the UK compare to mainland Europe?

Jamie: I think it’s the same!

Jamie: I’m a little bit surprised because we toured for many years in Germany and countries around, but it’s going really well. We’re working on the following and getting bigger over here.

What can we expect from you tonight?

Cari: A hell of a show! Some old songs, new ones, we don’t have that much time but we’ll do our best!

And lastly, three words for anyone who’s undecided about you.

Jamie: Buy our record!! Ha ha. We have a new album coming out in January, and a new single.