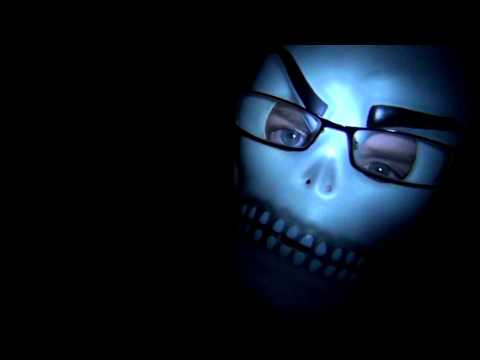 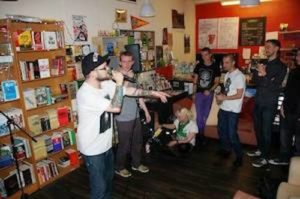 Last November Louder Than War’s Andy Carrington introduced us to the brilliant politically aware hip hop duo QELD. He recently caught up with them for the following illuminating interview.

Since hearing their song ’28 Draws Later’ last year, I’ve been keen to know more about Bristolian left-wing Hip-Hoppers Bob Savage and Jenre of QELD. I got the opportunity to speak with them recently about their politics and music ahead of their gig at the 0161 (anti-fascist) festival in Manchester, and they had plenty of interesting things to say…

On ’28 Draws Later’, you targeted the enemies of the right, but also seemed to address the many posers, talkers and wannabe-bad men of the left who claim to make a difference. Were you talking about anyone / any organisation in particular?

Bob Savage: “I wouldn’t say we’re too focused on which groups ‘claim’ to make a difference ‘cause that would imply that we do! And while there’s the obvious hate towards the Social Democrats, Liberals and SWPers of the ‘left’, I personally try not to be too sectarian; I just think we need to remember where we are. This isn’t Petrograd 1917, there aren’t workers councils springing up all over the country; the vast majority of the working-class aren’t even in unions anymore.”

“The lyrics in that song – “¡No pasarán! But you’re eager to let ’em pass / Grown ass man in a V For Vendetta mask” – refer to the changing face of ‘anarchism’ nowadays. The Guy Fawkes mask is a reference to the Occupy and Anonymous movements, but I don’t want that to come across as disrespect for them. It’s just the ‘99%’ slogan leads to the acceptance of flirtation with the far-right: from anti-Semitic conspiracy theorists like Infowars, to the mask-wearers declaring themselves ‘Anarcho-Capitalists’. The song’s more of an expression of concern about our movements and ideas being co-opted by our enemies than it is a dig at comrades with different ideologies.”

Jenre: “Actually, I don’t think there’s anything I say in that particular song aimed at anyone specific. Not that I have a problem with doing it. I don’t believe in some bullshit “Left Unity” where we don’t criticise each other in public because we have to present a united front. I don’t want to work with rape apologists, I don’t want to work with Authoritarian state-socialists or social democrats because they don’t share my goals. Putting everyone into some broad category and calling it “the left” isn’t helping us. Are the Labour Party part of this mythical “left”? Are the SWP? I have nothing in common with those people. Pretending I do, in order to display some kind of homogenous left mass, is actually pretty harmful.”

From your lyrics, I’m assuming QELD identifies most with Libertarian-Communism. Why this ideology most of all?

Bob Savage: “It just makes the most sense to us, man! I guess it was the Iraq war and Bush and Blair that first really ignited my interest in politics, and as I grew up on punk music it was very easy to find more information about left-wing ideas. I started with Noam Chomsky, found my way to Karl Marx. When I finally managed to grasp my mind around what a Communist society was supposed to look like – no poverty, no hunger, fewer working hours, workplaces run by all the people who worked there, more free time and access to studying for everyone – it became the obvious ideal that humanity should be striving for.”

“In fact, if you look historically, ALL social systems claimed this to be the final goal – even Capitalism (except the worker-run industry, of course). It was only the Anarchists who were interested in making a Communist society. They were the only people who directly told the workers and peasants that they could take control (while other Socialist ideologies worried more about taking control themselves). The best examples of Communist societies in our history – revolutionary Spain, revolutionary Ukraine – were brought about by anarchist ideas and the direct involvement of the working class. So, I’d basically say I’m an Anarchist because I’m a Communist!”

Jenre: “Well, I had to learn about Anarchism through the internet, basically, as I didn’t actually know any Anarchists (except Bob). So all my knowledge came through websites like libcom.org where I could find loads of articles, discussions etc. clarifying the theory for me. What I’ve grown to really like about Anarchism is the sense of taking things into your own hands – direct action! Not waiting for a benevolent leader or pleading for scraps from the big table.”

QELD seems to put an emphasis upon hard-hitting socio-political commentary to accompany its boom-bap production. Why have you specifically chosen to go ahead with this format, and not go down the grime and garage routes like many UK “urban” artists have?

Bob Savage: “This is just the music we listen to – we were never into garage or grime. The best Hip-Hop is made with old soul records and samplers.”

Jenre: “We’ve never once set out or decided “hey, let’s be a specifically political act”, but we are Anarchists and talk about that quite explicitly – that’s a big part of who we are. I don’t see how personal issues and political issues shouldn’t bleed into each other. The personal IS political so I don’t think there ever could be a distinction between personal and political music for us – it all runs together, all of the time.”

“As far as the production side of it goes, that’s just the music I love and always wanted to make. I never considered what approach I should take with my production; it was simply a matter of trying to create something that sounded like the music I was listening to. Honestly, I don’t listen to grime or know anything about it, so you probably wouldn’t want to hear me attempt that!” 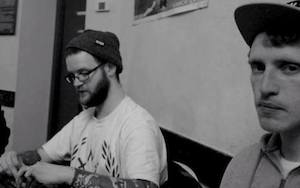 Which bands / authors / revolutionaries have most inspired your path into music and politics?

Bob Savage: “Well, like I said before, Chomsky and Marx were my first real understandings of left-wing ideas, as well as punk / hardcore bands such as Refused and Propagandhi. The early 90s NY classics – Nas, Wu-Tang etc. – and a lot of Lowlife-era UK Hip-Hop also played a big part; as did Sean Price of Heltah Skeltah and Cappo from Nottingham. Price and Cappo showed me how to flow and put rhymes together a lot more interestingly.”

“A lot of the time, I’m not really being ‘political’; when I throw out a reference I’m just battle rapping and declaring myself the best. “Yeah, I’m a Communist, I’m the Joseph Stalin of this shit!” type thing; as well as comparing myself to violent nihilist Russian peasants, just as a reference to how much weed I smoke. I just figure, if you’re going to make punch-line rap/stoner rap/whatever, make sure the references are more interesting!”

Jenre: “In terms of beats, there are a few producers who’ve really inspired me and made me want to make music myself. There’s the obvious names like J Dilla, Dr Dre, DJ Premier, Pete Rock. Also, British producers like Harry Love, Nappa etc. I love soul and funk music, which is the majority of what I sample. MCs like One Be Lo, Chester P, Jehst make me want to improve my lyrical game, too.”

“We’ve had great figureheads in our history like Durruti, Malatesta, Kropotkin, Lucy Parsons and more, but I don’t think we should get drawn into idolising anyone. When I read of normal, everyday people fighting incredibly brave and important fights, that’s what inspires me the most.”

You’re on the bill for the 0161 Festival this coming May, which will raise money for a number of anti-fascist organizations around Europe. Do you think it’s a good thing that such a festival is being openly “political” in its aspirations?

Bob Savage: “Very excited about playing this. We’ll be doing a mini-tour first, heading to Geneva for May 1st, Milano for the 2nd, then we’ll be heading to Manchester. It’s going to be great to play with so many other anti-fascist acts, and it’s nice to see left-wing ideas becoming more ‘normalised’ in Britain. It is potentially risky, though, depending how organised the boneheads are.”

Jenre: “I think it’s great, yeah. Maybe it will put some people off coming and maybe it will encourage others. But we should still be explicit about it. We can’t afford to be sitting on the fence. There’s going to be some great music and people will enjoy themselves. Let’s just hope we can raise plenty of money, too!”

Has Kush Zombies been delayed? When shall we expect it to be released?

Bob Savage: “Haha, a friend of mine compared Kush Zombies to Dr Dre’s Detox recently. Yeah, we kinda made a mistake by saying we were going to be releasing it a year ago. It’s hard, ya know: we work full time and it’s sometimes difficult to fit your own aspirations into your own life. It’s all written, we just have to get around to recording a few last verses and then get it mixed, mastered and everything else!”

Jenre: “I knew this question was coming, haha. Umm … soon! Honestly, I think we have only two or three songs left to actually record. We’re excited about it. It won’t be too long now – promise!”