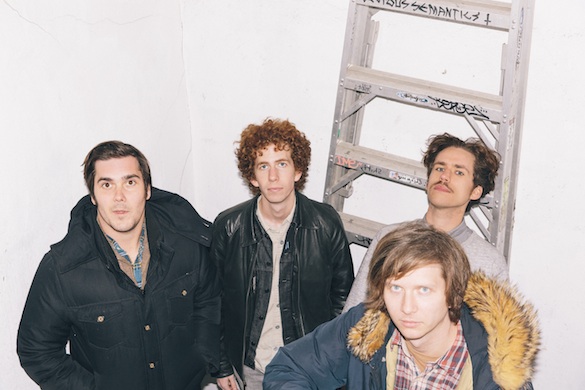 Louder Than War’s Harley Cassidy recently caught up with Parquet Courts frontman Andrew Savage via email, asking him questions about the comparison people make to his band and Pavement, songwriting and what he thinks the future holds in store for Parquet Courts.

New York has always been an interesting port of call for music with various lineages that have for the past few decades been fashioned into the stuff of music history and legend. Parquet Courts are connected to this very bloodline and share classic NYC attributes that have allowed journalists to pigeonhole them into this bracket. In theory, it seems Parquet Courts are very austere. Intent on what they want to do. It’s hard to distinguish whether the band really do take themselves that seriously or it’s all just clouded by an inside sense of sardonic humour.

With a talent for releasing a bevy of material within a short amount of time, frontman Andrew Savage’s take on songwriting is simply a natural means. “I wouldn’t describe songwriting as easy. Rather, it’s my best method of self-expression, so I do it a lot”. The chosen answer for many an artist. For some, the song writing process takes forever and pushes an album even further back, not due to production but a nice, good old case of writers block. A problem which Parquet Courts don’t seem to have.

Talk turns to the latest album, Sunbathing Animal, whose front cover depicts a chopped up cat. Why a cat? I ask. “Because they like to sunbathe”,  Andrew replies. If it’s good enough for them, it’s good enough for me. Sunbathing Animal has one particular ode to a “Dear Ramona”, a lady or “hypnosis poet” who “drinks dark coffee at night”. Strong enough imagery to be based on a real-life person? “I’m not sure, that was written by Austin”, Andrew claims. “Though I have my theories of who Ramona is, I told Austin not to tell me”.

It gets even more feint than that when talk turns to more than just musical influences on the record. Andrew cites American novelist William T. Vollmann, Russian artist Kazimir Malevich and surrealist Mexican painter Frida Kahlo as people who had a lasting effect on the album. He doesn’t expand on these trio of gamechangers, however. In fact, they’re a pretty odd assortment to reference, not least for the fact that Maevich, the man who was arguably responsible for liberating paintings, has been plucked out of thin air. Parquet Courts’ music wouldn’t exactly be classed as liberating but their radical yet stubborn approach to their chosen art falls into the same intention as Malevich.

Answers to my questions are blunt and straight to the point. Maybe Parquet Courts are becoming bored or don’t have a particular fondness for being pressed and quizzed on their work. The band are known for their filed down minimalism and lack of elaboration. Matched with a sense of urgency and their songs delivered in short, esoteric shots I ask Andrew if he could ever see himself one day branching into more opulent fields, but he states that artists like Pink Floyd and the grandiose ilk of their kind wouldn’t really work. “I think it works in our favour to use a bit of restraint”, he states.

Now we know that with any band, people like to make their comparisons, and Pavement’s name been dropped all over the place with no bigger claim made than by Pavement’s very own Stephen Malkmus who alleged that he thought he was listening to his own band when Parquet’s record was being played. Andrew was neither flattered nor insulted; on the contrary he claims that “Pavement have had their fair share of accusations regarding being derivative [see New Face In Hell by The Fall] so I don’t think he meant for it to be insulting. Truth be told, Pavement is not a big influence on Parquet Courts. I like them and respect them, but I think we share similar influences, like Velvet Underground, Roxy Music, The Fall, etc… and therefore we have certain sonic similarities”.

The band have been dubbed “stoners” due in large part to some of their work, most notably “Stoned and Starving”. It’s a title easily and, more than anything, lazily placed on the band and Andrew admits that even he isn’t too taken with the appellation – “but then again, there aren’t many titles I’m happy with”.

You could assume that Parquet Courts are still somewhat breaking through the surface due to their most notable success last year, even though their music has encompassed just over three years. In fact, there are plenty of bands dwelling in New York that have been slipping out of the music radar’s reach yet have been playing the music game for a while. I wondered whether Andrew had any bands in particular who he would recommend personally. “I’m putting out an LP by PC Worship this fall, so keep your ear to the ground for that”, he acknowledges. PC Worship, a DIY collective from Brooklyn, play lazy, scuzzy rock and have, you guessed it, been around long enough to pave their path with a handful of EPs.

In introspect, Parquet Courts have no set, world changing mission just yet. For now Andrew’s wishes are to only “keep making records and keep playing live, until we are no longer able to”, a response which makes them more real and appealing than they’d like to think.

All words and interview by Harley Cassidy, find her Louder than war archive here.