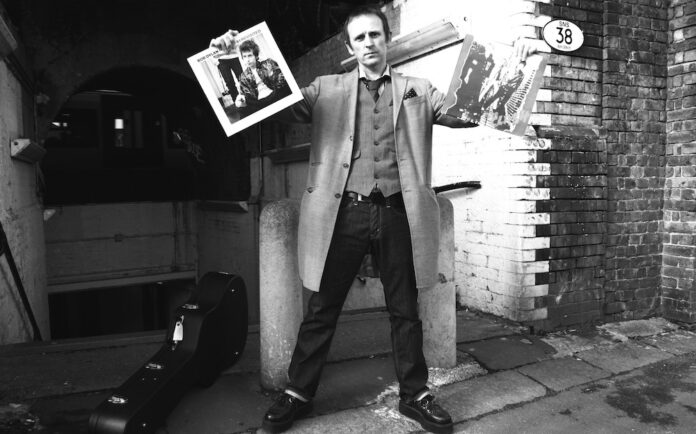 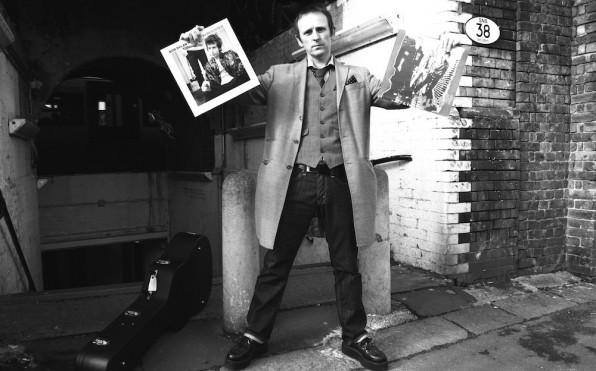 Louder Than War’s Sophie Luchinsky recently met up with The Lone Groover, aka Brian Caulfield, aka “Song and Dance Man” who, says his Facebook page “…is a one man and guitar outfit who channels his love of folk, punk and Americana into classic songs of beauty, protest and passion – agit-FOLK ‘N’ BOP if you will.”

“And maybe in the morning I’ll be gone – then maybe by the evening I’m on song” – these lyrical words of punk poet The Lone Groover are not only brilliant poetry that creates the atmosphere of his unrivalled songs but also his intelligent lyrics elucidate society, politics and nowadays world.

Named after the anti-hero of old comic strip that ran in the NME throughout the 70’s The Lone Groover -the London based songwriter whose talent reflects in his considerable songs with ‘agit-folk ‘n’ bop’ style –has been performing in famous venues – The Hope & Anchor, The 12 Bar and the Windmill, played at Strummerville & Anti-folk festivals and had prestigious support slots with Willy Mason, Alabama 3, Glenn Tilbrook, and Beans on Toast amongst others. Being an outstanding talented musician and also a very intelligent person The Lone Groover (Brian Caulfield) says “I wanna walk like The Clash and sound like Bob Dylan”.

Before playing as The Lone Groover for about 3 years, Brian Caulfield first picked up the guitar by the time he was around 10. “I was the right age for the golden age of pop, Top of the Pops, the Old Grey Whistle Test, the 45, the album. Seeing the glam rock of Slade/Sweet/Bowie etc in glorious technicolour on TV just grabbed me. From that moment I was hooked – me and thousands of other kids. Then I got into The Who, Beatles, 60’s stuff, Pink Floyd, Motown etc. It meant my tastes were shaped early on. Then came punk.” – Brian tells. 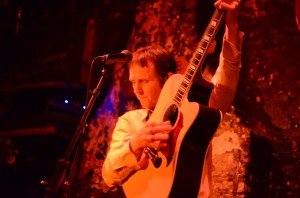 Talking about punk scene around 70-80’s Brian recalls, – “Punk scene in general was phenomenal. It spoke directly to me. Still does. I loved the year zero approach and that pretty much anything goes, that was really appealing to a 12 year old. It changed a lot of kids lives in as much as it empowered them, particularly working class kids, to challenge authority and ask questions. It also helped channel our energy and poeticised our aggression and celebrated our hostility to the powers that be. And we relished the opportunity to be clever smartarses or monosyllabic hooligans, either way was valid and accepted. I still play all those old records from time to time and they still mean a lot to me. Mind you, I know a fair few of the old London punks these days, and we can occasionally still be spotted going at the 100 Club when an old punk band rolls into town.”

As The Lone Groover Brian made few excellent The Clash covers in his own style. “I was lucky enough to have seen The Clash a few times, and as most will attest who did, that’s what made them a cut above the rest, absolutely thrilling.”, – he tells. “The first time I saw them at the Lyceum was the greatest gig I ever went to. Their recorded output was also first rate. The debut and ‘Sandinista’ are my faves. Lyrically, there seemed to be an added depth but without them being too arty or pompous, it actually broadened my horizons and world view, particularly on the politics of race. Even their clobber evolved as they did, they looked fantastic. That doesn’t mean to say I don’t also love the reductive quality of a lot of the other punk bands but I preferred the wider pallet of ‘el Clash combo’. I have done quite a few covers of theirs but always try to add something (or even take something away) to validate it.”

Although talking about punk rock The Lone Groover says, – “The problem these days is that people think if you pick up a guitar and grunt an expletive, you’re a punk rocker, but it’s not as easy as that. To me Punk rock is really an aesthetic rather than a sound or a sneer, you either is or you isn’t. And those that know, know, and those that don’t, don’t.”

Influenced by Bob Dylan music, The Lone Groover with the great sound of his acoustic guitar and witty lyrics however has his own style. “What can I say, Bob Dylan was the master.”, – The Lone Groover says. “He was the soundtrack to the civil rights movement in the early 60’s. Then in 65/66 he was without doubt the coolest person who ever walked the planet. That look he had, often copied, never bettered. And when he went electric and was getting booed nightly, his response “play it fuckin’ louder”, totally punk rock. Those idiots didn’t realize they were seeing the earth tilt on it’s axis during those shows. Then his later 60’s phase I loved, then the 70’s. And now he just does the most wonderfully bizarre versions of his songs, you gotta’ dig that. Need I go on?” 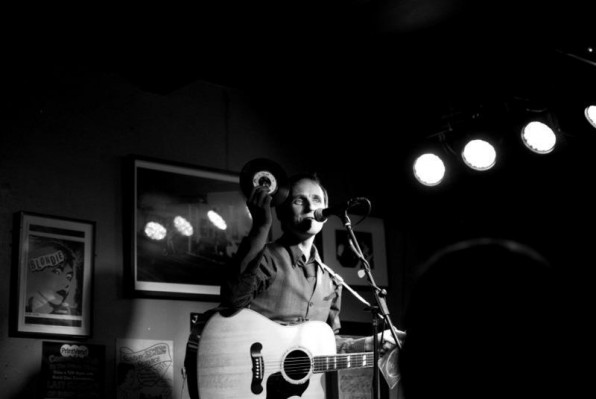 As a songwriter The Lone Groover has a message in his songs and sometimes with political thoughts in them. “I try to write about the world I inhabit, and as you get older you have different preoccupations to that of a youngster, but they’re no less important.”, – Brian says. “At the moment though, the current shower in power are so aggressive in their attacks on the poor and the vulnerable, that to not be a voice of dissent would be unthinkable. That said, as an older more considered lefty, I don’t see the world in black and white, as I used to, and I think that comes across in the songs.”

Talking about his song “How the West was Lost”, The Lone Groover says, – “The song is really about today here in the UK and that feeling that we are losing our way. Capitalism, and our own lack of adventure is slowly suffocating us…..but with all that shit going down, it’s the refrain “in a world that’s getting harder to explain, the love of a good woman keeps me sane” that is the important one.”

Along with other poetic and catchy songs such as “Like the 70’s never happened” or “Country Singer” -the song “Talkin’ Demonstration Blues” is truly a protest song.

“I have a few and that’s one of them.”, – says The Lone Groover. “It was inspired by the student protests back in 2010. A lot of people of my generation, me included, were continually saying that young people weren’t politicised and were apathetic and generally getting misty eyed reminiscing about the days when we were always demonstrating against something. Then the student protests happened, swiftly followed by the riots …and we changed our tune.”

“When I was younger I was very political and quite a loudmouth to boot. The rights and wrongs of the world seemed obvious and I knew which side I was on. I was very proud of being working class and as a result my politics were of the left, and still are but maybe not quite as far as they were. As I’ve gotten older and having lost some of my working class edge to the vagaries of circumstance (rather than aspiration), I feel I know less about the world rather than more. I certainly don’t have knee jerk responses to much stuff anymore, I’m a bit more considered in my thinking. They say wisdom comes with age but I’m not so sure about that. Or as Bob Dylan might say “I was so much older then, I’m younger than that now””.

The Lone’s Groover’s new album “Soundbites and Civil Rights” will be released this year. Also he will be performing at Strummercamp festival this year also ‘Punk 4 the Homeless’ festival in Skegness in early May.

As The Lone Groover says, “You’ll still find me popping up and doing my song and dance routine all over the capital and beyond. You can’t keep a good groover down you see.”