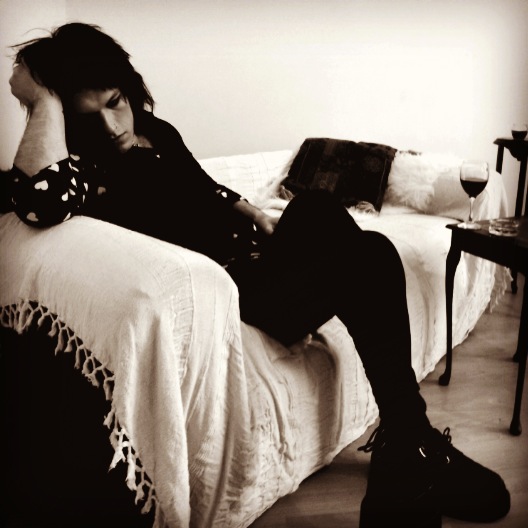 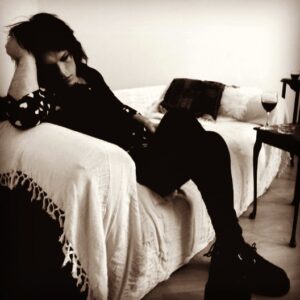 Fermanagh troubadour Matty James talks new single and forthcoming album, his views on DIY, and getting to work with one of his heroes, Tyla from The Dogs D’Amour.

Having played drums in various different bands since his teens, often with his brother, a couple of years ago multi-instrumentalist Matty James stepped out front to lead the Punk Rock group Filthy Angels, a band he formed with his brother Philthy and two friends.  They released their début album L.A.F.A. (Like a Filthy Angel) independently via a pledge campaign back in 2012 to an enthusiastic critic and public response.  Not having completely abandoning the sticks, Matty also plays drums with  Louder than War favourites Cadaver Club. If all that wasn’t time consuming enough, he also has a  concurrent solo career.

He’s released two well received EPs, and a live acoustic album.  The high octane of Rock n’ Roll of the aforementioned combos is discarded for a more bluesy rock feel,  think the spirit of Johnny Thunders mixed with a little Johnny Cash, everything from punk, country and folk is thrown into the mix. With a deep and mature voice that belies his youth, he shares much in style with fellow country men Ricky Warwick, and Stefan Murphy. He has just released the single Up in Smoke, and like his forthcoming album, it is released on his own Independent label Pirate Heart Records. Impressed with what we heard, Louder than War made it our business to catch up with Matty recently, to  ask him a couple of questions.

LTW: How did your first foray into front man duties in Filthy Angels come about?

Matty James: I’d always sorta played with my brother and stuff like that, working on songs, in bands and everything, we decided we wanted to put something together with two good friends, John Moffet and Aidan Ralph, John has a studio, the Oaks recording studio in Fermanagh , so it’s kind of where I met all my musician friends. We started working on songs and wanted to gig and kinda took it from there . I was always a drummer you see, and playing in bands since I was about 12, so it was when I decided to I wanted to get from out behind the kit to write songs, the best way to do it was in the studio, so I could put down the drums, work out some bass and put down some guitars and kind of build songs up that way. We had been practising and recording for a good six months with no real views as to what we were doing and then we did a local gig in Lakes of The Hollow (Enniskillen), and took it from there really. Then I moved over to England and that gave us a sorta base in England to be able to some tours and things like that and we built up a good fan base which allowed us to then do an actual release, our début album L.A.F.A. (Like A Filthy Angel), which we did through a pledge campaign. We haven’t done anything as Filthy Angels in a while but we certainly will again, we’re just all involved in quite a lot of projects and do quite a lot of different stuff.

LTW: And was it when you moved to England that you first started playing solo, as Matty James?

MJ: Yeah, yeah, and that was simply through not having a band there, and just wanting to get out and play and got an opportunity to a gig in London with Tyla from Dog’s D’Amour. Filthy Angels had done a tour with Dogs D’Amour and then Tyla was doing a solo show and I got the opportunity to open up  and that’s what really started it, I’d never played an acoustic guitar live or anything like that before, and I just thought why not!

LTW: You obviously stroke up a bit of a friendship with Tyla, as you ended up playing several dates with him, and now he’s appearing on your forthcoming album too?

MJ: Yeah, that’s true, that’s been really great, because he has such a great cult following, and his fans are some of the nicest people I have met, and they sorta latched on to what I was doing and enjoyed it as well. It’s been a really good platform for me and the fact that Tyla’s such a nice guy and helpful aswell, he’s had me support pretty much all the gigs he did last year and now he’s playing on the album, I would have grown up listening to The Dog’s D’Amour records and him being a bit of a hero of mine, to hear him singing one of my songs is just brilliant.

LTW: All your stuff, Filthy Angels, Cadaver Club and your solo material are released under Pirate Heart Records, so did you at any stage go down that traditional route of sending out demos to record labels or anything like that?

MJ: I think I did a little bit at the start of Filthy Angels but I’m sort of kind of a  bit of a busybody, I kinda got quickly tired of, I never wanted to wait around for anything, and I just thought, and there are so many labels out there that are great and everything and do their own thing, whatever. I’m just one of those people that looks at things and wonders, well how could I do it myself? I like to think, well maybe we could do this on our own, so instead of waiting around for somebody to say they want to put out your album, I just learned how to do it myself!

LTW: Did you approach the song writing differently (from the groups) for the solo album?

MJ: Anything we write for any band usually starts with an acoustic guitar anyway, cause I’ve always believed that if a songs sounds great just stripped back to voice and acoustic guitar, then you know its a good song, but yeah, I suppose it’s a different approach, because I know a lot of the time it’s going to be played solo.

LTW: Would you prefer to be playing these songs solo, or with a full band? Obviously it’s a whole lot easier to take yourself on the road instead of a whole band?

MJ: Yeah, I would definitely be lying if I said the that financial side of things his helped by just doing it on your own (laughs), but, I love the solo acoustic thing,  I’ve always enjoyed going to gigs that are solo acoustic cause there’s that nice intimacy, you get to hear the songs in a really raw form. It’s relaxed, the interaction with the audience, it’s fun that way, but then I do love a big noisy rock ‘n’ roll band, you know, when I record my solo stuff, I do play drums, bass and guitars and it is a full band sound, so I would hope in the future to perform my solo stuff with a band as well, but I’ll always like to do a bit of both I think. They’re two different things, and I love the both of them.

LTW: I imagine that even when played with an acoustic guitar some of the songs sound quite loud?

MJ: Yeah, yeah, a lot of them do you know, there’s some balladry stuff there but a lot of it still is in your face rock n’ roll, so it’s not your average singer songwriter type thing!

Up in Smoke is out now. Matty’s new album The Last One to Die is out on June 2nd, see Louder than War in the coming weeks for a review.

Check out other releases, including the forthcoming live album from Cadaver Club, on Pirate Heart Records.