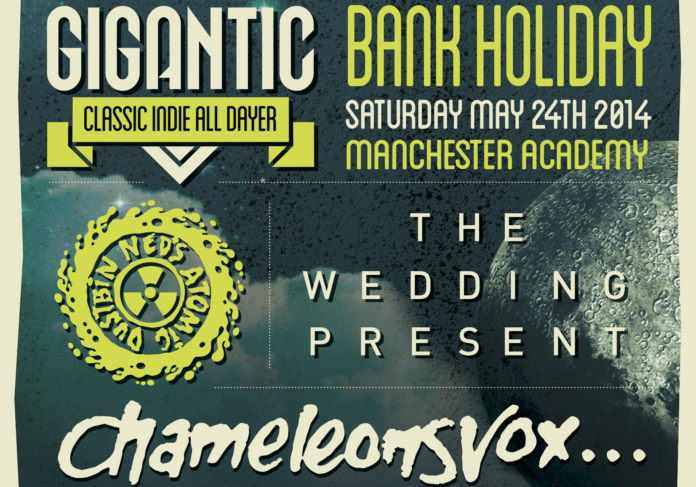 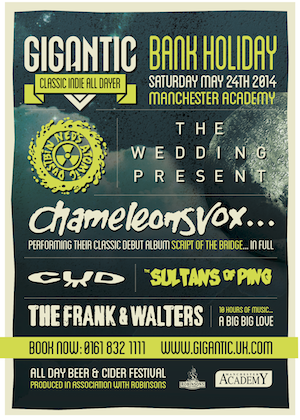 Chameleons Vox are due to be special guests at the Classic Indie All Dayer in Manchester on May Bank Holiday (for full details see below) before heading out on a European tour. A good time, then, to catch up with Mark Burgess to find out what he’s been up to and what plans Chameleons Vox have in the pipeline.

Louder Than War: Chameleons Vox are soon to embark upon a European ‘Script of The Bridge’ tour, it’s 30 years now since that album came out, when you think back to that time what memories stand out the most?

Mark Burgess: Well, it was probably the best time I had with the band overall. I mean it’d been difficult having been dropped by CBS after just one single when they’d actually insisted we were an album band in the way that U2 were perceived back then, but none of that phased us because we had total belief in our music, which CBS had tried to alter and tailor to the trends of the times i.e. three or four minute radio friendly tracks. Mainly my memories revolve around actually making the record at Cargo in Rochdale and it was a great experience. Ideas were flowing in torrents, friends were calling round and getting involved in one way or another. Everyone was getting on and the mood was good. I thought we’d made a good record but I honestly never imagined that people would be wanting me to perform this music 30 years down the road.

It’s a 24 date tour in May, 20 of which are relentlessly back-to-back. When you wake up on that first day of the 20 day stint, will your first thought be “Oh fuck!”? How do you plan to get through it still smiling and giving 100% to each show?

No I don’t think I’ve ever felt like that. If I did feel like that I’d never agree to do it in the first place or I’d cancel it. I wouldn’t have people paying good money to see me, or anyone in the band for that matter, perform on anything less than 100% commitment or focus.

Many Chameleons’ fans have formed an intense attachment to the songs due to the depth of emotion they prise from the listener whilst also provoking an emotionally cathartic release. How does it feel to know that 30yrs on, the creativity you’ve poured into your songs is forever weaved into the backdrop of so many peoples lives and memories?

It’s a bitter sweet feeling really because while I appreciate the depth of love and passion there is for this music it can get a bit freaky. I’m aware that amongst some poor souls the fanaticism borders on the religious and that kind of freaks me out sometimes.

It’s clear to see from any live show that the fans adore you and the music immensely, how do you think that level of positive feedback affects the way you develop as a person?

Well, I make sure that the people that I’m working with or are in my life are the kind of people that keep you grounded. While I’m flattered at some of the intense compliments I personally have received in the wake of the work I’ve done with Chameleons or whoever, I really don’t take it seriously at all. I’m just grateful for the amount of freedom this work has given me over the years to do and go pretty much where I like. If people dig the music and support the band by buying a record or coming to a show, that’s enough for me really.

Do some fans cross a line by exerting a more possessive and judgemental form of expectation upon you, if so how do you get your head around that?

I struggle to get my head around it to be honest sometimes. I mean in the past I have laid myself wide open to both the flatterers and the hate mob alike, so I’ve only got myself to blame really. But yeah it does my head in that people that I might never have met in my life in the real world make judgements about you that have absolutely no basis in reality whatsoever.

Do you tend to be more creatively switched on and prolific when you’re trying to process raw and emotional things occurring in your personal life or can you just sit and write whenever?

I have to be in a certain state of awareness, what I’ve come to think of as a more awakened state so get clarity and it can be quite a difficult state of mind to exist in because it lays aside the practical and can dredge all sorts of things up in the psych. As I got older it became more difficult to get myself to go there in my head, so actually I’ve got less prolific.

There was the EP ‘M+D=1(8)’, released late last year and a collaboration with Periscope single ‘Time Enough’ in February, when can we expect the new album?

Well, it’s still very much taking shape. I binned a lot of ideas that I initially had because they just weren’t doing it for me, the general direction didn’t feel fresh or organic. I work better when I collaborate so I got into that a bit more and the results, for me at any rate, are far more satisfactory. It’s set us back time wise but I think we’ll have a far better record at the end of it. I think there’ll be some surprises and for me that’s a good thing. Some have said to me that because of the renaissance that periodically seems to occur with Chameleons music, drawing a younger audience that weren’t around initially, I should be capitalising on that and making sure my voice or the sound of the band hits those check boxes, but I don’t agree. Who the fuck wants to make a new record that sounds like it was made 30 years ago or whatever? Not me. For those people they can still find those recordings. It’s one thing to go out and perform Script Of The Bridge for people, it’s another thing to try and replicate that sound on a new record three decades later.

There seem to be a few new sounds transpiring in the new work released by Chameleons Vox. Are you content with the journey Chameleons Vox are taking so far and will there be tours where you play the other albums in their entirety?

The EP has to be judged a stand-alone thing really because it comprises material that I didn’t feel was quite right for the album but interesting enough to put out. In the old days you’d make an album that people liked, and in the wake of that demos and whatnot would surface that often comprised songs that for one reason or another didn’t make the album cut, or didn’t get released. All we’ve done is do that first.

Which other acts are you into at the moment and do you get out to many gigs at all?

I tend to go through phases with watching live bands. I mean I’ve been touring a lot over the last four years and so when I get off the road usually the last thing I want to do is go out to live gigs. Another thing is that I tend to get into some underground project that’s emerging and six months later it’s all over and they’ve all moved on to something else. Examples are The Evil Poor, that was made up of guys from Manchester’s Gabriel’s Wish, Northside and a one or two others. I drove them up to Newcastle to open for New Order the other year and they blew me away, best thing I’d seen come out in Manchester in a long long time, but I’m told they’ve all jacked it in to get on with other things. Similarly Blasted Canyons in San Francisco, although they’d been at it a while, were fantastic but they split up pretty soon after attending last year’s SXSW in Austin. More mainstream loves for me – for want of a better term – would be Mogwai, Radiohead and Editors. The Mog’s turned in a soundtrack the other year for a French TV drama The Returned that’s just beautiful.

Will there be other album performance tours?

Quite a few have asked me if we’d do this show in America and other places. If the opportunity arose then I don’t suppose we’d have a problem with it. We’ve done three ‘Script’ shows in the last four years, two in America and one in Manchester and we really enjoyed it despite the weirdness of the song sequencing. We didn’t make the decision to do this tour, we were INVITED to do it by an agent representing promoters that wanted the show, we thought about it and agreed to do it. If we were to get invited to do something similar then we’d consider it based on the merits and current climate around the band.

If you were to sum up your current philosophy of life in one sentence, what would it be?

Full details about the Classic Indie All Dayer in Manchester for which six classic acts have been lined up to take over the UK’s busiest gig venue for an afternoon, evening and night of bona fide anthems.

“The Gigantic Classic Indie All-Dayer will be held at Manchester Academy on Bank Holiday Saturday 24th May 2014, and will run from 1.30PM to 11.30PM. On the day expect an abundance of bonuses, including quality festival food with an all-day BBQ with real vegetarian options, plus a Robinson’s Real Ale and Cider tent. But, of course, the cuisine is far from the real story here, what with the acts involved.”

“Quite the unique live event, anyone with even half an interest in our national musical heritage could do far worse than get down to this. After all, it’s not everyday this many bona fide icons are brought together for one hugely celebratory 10-hour party.”

Tickets are available from: manchesteracademy.net or ticketline.co.uk. Alternatively call the box office on: 0161 832 1111.