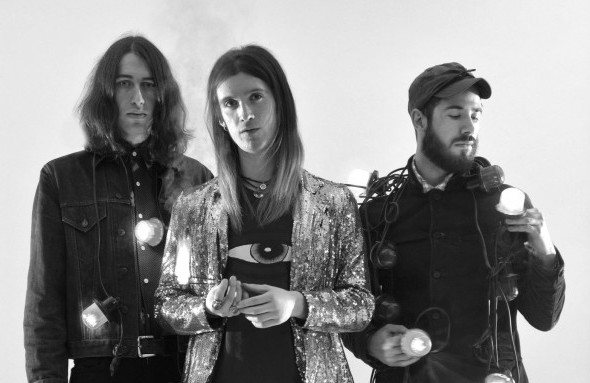 Photo above by Ian Tilton

Man Made have been busy. They’ve just completed their first UK tour, recorded a session for the BBC at Maida Vale, played in front of their biggest audience ever supporting Jake Bugg recently and have had a residency in their hometown in Manchester at Night & Day Café. So plenty for them to talk about them when Louder Than War’s Josh Nicol caught up with them recently.

It may be too obvious to linger on the topic of frontman, Nile Marr’s quite blatant musical heritage, but the 22-year-old son of the ex-Smiths guitarist is creating an end product far away from what you would necessarily expect. Heavily influenced by bands from his time in the US as a teenager, artists such as Fugazi, Elliot Smith and Modest Mouse mean more to Marr than any Manchester musician you’d typically attribute to the city’s culture.

“When I was a kid, the only record I had was ‘Desire’ by Bob Dylan.” says Nile, “That was pretty much the only thing I used to listen to until I was a teenager when we moved. I was suddenly shown guitar playing, bands like Built To Spill, Fugazi and Modest Mouse and this whole different way of working I’d never seen before.” Marr humorously calls this certain period of a person’s life the “sponge years” elaborating and explaining it as “the sort of years where you start to figure out what’s cool.”

The band was initially formed as Marr’s solo project, a way of him to test out the strength of his song-writing without any distractions of any other added elements. As the band progressed, Scott Strange was added to the line-up on drums and Callum Rogers was scooped from other bands based on the fact he “looked cool”. Luckily he provided that vital added element, completing the three-piece on bass and adding a heavy, primitive tone to balance out Nile Marr’s melodic ability.

“I listened to a lot of Pacific Northwest artists, and Fugazi are an East Coast band, but the bands they inspired I was suddenly around. And Modest Mouse were a big one, Built To Spill were a big one and Elliot Smith was a massive deal when I was still doing acoustic stuff. And it was the way they used guitars. I’d never heard anything like it. And the way it was music based around guitars. With Fugazi it was the most interesting use of two guitars I’d heard and have still heard. With Modest Mouse it was like nothing else I’d come across before. As a kid it just blew my mind, taking it all in. This is what I think music is, this is what I wanted do.”

His father would later join one of his favourite bands, Modest Mouse for their last record, ‘We Were Dead Before the Ship Even Sank’, “I knew Modest Mouse before my dad joined. And I remember when he got the call asking to join the band. And he was like ‘I’ve been asked to join this band, Modest Mouse’ and I was like ‘Wait!’ and played him loads of records. It wasn’t like I introduced him to them, but I gave him a very hard nudge and said ‘You should do it’.”

Marr’s unashamed passion for music is a fascinating and captivating trait. Both on and offstage, his obsession and charisma is very clear. He talks for minutes without interruption about a certain scene or artist.

However, to him, it’s not just a love of music he has developed growing up; it’s also a work ethic. He mentions John Martyn, and the idea that for a long time that was who he wanted to be as a musician. “I’d never seen guitars used like that. I’d never seen an acoustic done like that. I even grew my fingernails. For the early years I was like, ‘I am only going to play acoustic and I am going to be John Martyn’.” says Marr.

In a sense, he explains how he attempted to live the life of a troubadour due to his love for John Martyn, “I’d have school, and would have my guitar with me and I’d duck out of school early last lesson, leg it to the train station, and get on the train to London. I’d get changed on the train and restring my guitars, and then get off, play the gig, get the last train home, and I’d do that for like three or four days a week. And obviously when I discovered Elliot Smith, I was like, ‘Woah you can go from punk rock to that? This is brill!’ I still love John Martyn. I’ll always love John Martyn.”

Man Made are a product of the current state of the 21st Century music industry. There’s a certain attitude a band needs to have to be successful in the industry at present and they seem to have at big portion of that assertiveness and determination. Marr talks vehemently and with frustration about the lack of all-ages gigs, “For me, if there are kids that want to come see us, even if it means pulling them through the dressing room window, I will aim to do that, because I think it’s ridiculous.“ 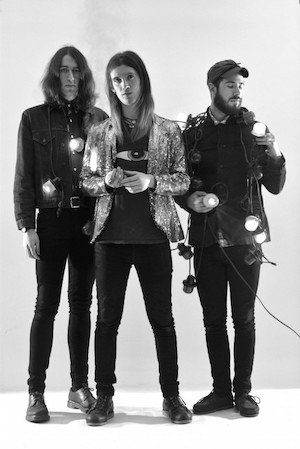 (Photo right by Ian Tilton) On their recent tour, the band drove to a promoter’s house to confront him and take him to a cashpoint after he left the venue without paying them, “It’s the fact that you’re doing it all together. We’re not very good at being heavy, but he called and apologised the next day so we’re alright. It’s part of touring.”

Something that becomes clear about the band is that they don’t seem to have used the easy routes to get where they are now, a route they could have easily followed via their frontman’s family connections. The group seem very determined to work hard and completely commit to the idea of being in a band and giving it a go the same as any other young band does.

“Musicians and artists have been around since I was a kid. The amount of people that my dad has worked with, I’ve got to know from being a really little kid, all these different kind of artists. And one thing that you get from it, is you learn exactly how serious you need to be about it and exactly how hard you have to work.” says Marr, “No matter who you are and no matter what band you’re in, if you are going to make it, you have to work really hard and you have to fully commit with absolutely all of you.

“If your dad’s an electrician, you expect the offspring to be able to fix a lamp. So it makes total sense on every level that you look at it. I think that the age of the rock star has completely gone, so I think if you’re an indie offspring, all that you learn is from musicians, and the work ethic, and what you’ve got to do.”

The next big event for Man Made is their last gig of the year at The Castle Hotel on the 10th of December, “The last time we played the Castle it was fantastic cos it was the first time we’d come home in a bit and you get to play a venue that you know. And it was the best crowd of the whole tour. The most involved and I think we played the best.

“The last one was great, so this next one, it’ll be better and The Castle is a good venue to do it in. It’s a nice venue for us cos we like it when everyone’s sweating together. It’s good fun to play a venue in your hometown.”

The live Man Made performance is a dirty and gritty experience. They will suit playing small shows, having a cult following and being the kind of band to still maintain a certain attitude well into their career.

The three-piece is well-balanced. Scott Strange and Callum Rogers provide an effortlessly cool rhythm section and deliver the aggression that enriches the skill for song-writing that Nile Marr possesses. The frontman and key songwriter takes his fair share of the weight and is able to withstand it with his charisma, confidence and endearing presence, both on and off the stage.

It’s lucky that the band will be sneaking people into venues, because they’re most certainly a band for kids in their “sponge years”. Man Made belong to the 21st century, both creatively and with their attitude and work ethic, representing a new generation of musicians working in a struggling industry.

All words by Josh Nicol. More from Josh can be found at his Author’s Archive.