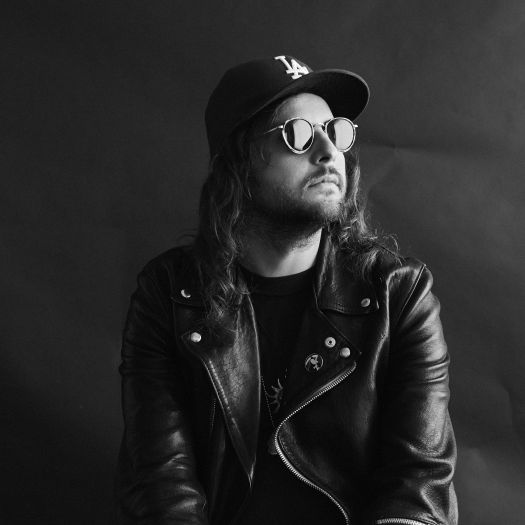 Carrie Quartly has a typically droll and wacky chat with King Tuff, rock ‘n’ roll’s own benevolent Hellboy, about his stellar new album Black Moon Spell, the imminent European tour, and the magical power of music.

Louder Than War: The new record is rooted in a ‘vintage’ 70s rock sound. You used Bobby Harlow and the new Studio B space to record in, he’s great at making modern day albums sound like old classics. I don’t mean to say they sound dated, they just seem instinctively familiar and instantly accessible in a way that defies time…Did you already know pretty much how you wanted everything to turn out or did ‘the Burger guru’ steer you in any new directions during the process?

King Tuff: We got lost in the maze with no ideas and came out covered in flies and ice cream, not sure how we got outta there but we were all pretty damn thankful when we did.

On Headbanger, you describe your ideal woman listening to Iron Maiden, Judas Priest, Black Sabbath, etc., and those references sort of reinforce your direction with the overall rockier sound of Black Moon Spell. What sort of record collection would bum King Tuff out and make him say “I’m outta here!” on a first date?

If the person didn’t like music at all I might have a hard time with that, but otherwise I respect other people’s taste no matter how questionable it may be. I’m definitely into some questionable shit which you would probably be shocked by. I just like well-written songs no matter what genre they are.

You’ve talked before about indulging extremes of personality, and King Tuff has become a sort of larger than life character, a loveable cartoon freak…What would you say are your most dominant personality traits and how have you used them to build the Tuffy mythos?

I think I have a pretty good nose. And all my good riffs come from my love handles.

Are there any parts of you that you try and repress or leave behind as King Tuff, either during song writing or performing live?

Sometimes my brain gets in the way so I’m looking for a big mason jar I can keep it in backstage while we play.

You use celestial bodies and magic imagery a lot in your music; do you believe rock ‘n’ roll holds mystical powers that can be harnessed for good or evil by its listeners?

I think music is the most obvious form of magic. It’s God. It’s invisible and it’s powerful as fuck and has the ability to invoke all sorts of emotions. Each song has a personality and identity; they are almost like living creatures.

What kind of fuel or magic elixir does King Tuff require to bring out the best of his mad self? Unicorn blood? Wizard’s milk? Goblin pus? Coffee?

Coffee for sure. I love me some black juice. It turns me from a shitmonkey to a golden goat head the minute it touches my tongue.

Will there be a moon medallion?

Maybe that’s next. I’ve thought about that for years. I love the sun but I’m definitely a creature of the night.

How do you cope with your increasing popularity? Your records have gone from obscure collector status to essential indie store staples. I remember when I first played your music for my mother, she mentioned starting a campaign to get you on all the local radio stations, and she never does stuff like that.

I love moms! Tell your mom I love her. Luckily I seem to have really cool, sweet fans that just want hugs. Sometimes people get a little creepy but I’m pretty good at dealing with that. And Magic Jake is my bodyguard in case anyone attacks me.

Your current band is great. You’ve got Magic Jake on bass and Old Gary on drums. If those guys were unavailable, who would you draft in as replacements for the ultimate King Tuff supergroup?

Animal on drums, Paul McCartney on bass, Ozzy on vocals, Santa Claus on guitar, and I would just watch from the crowd.

Your family seems very supportive and involved; your brother Luke collaborates with artwork, etc., were things ever tense when you were still living at home with your parents?

Nope. They’ve always been incredibly supportive and helpful. I owe it all to them.

What’s the weirdest thing you ever brought back from your old thrift store job?

The sun medallion was a pretty weird thing considering it sent me on this long strange trip and I probably wouldn’t be here if it weren’t for that.

You get a lot of different styles out with all your other bands, too. There’s the psych-folk of Feathers, the straight-up pop of Happy Birthday and the acid doom of Witch. Any other genres you’d like to experiment with?

Will there be another Witch album?

You live in LA now but I’m proud to count you as a fellow New Englander. I think New England is good at manufacturing freaks, truants and weed-eating hippies. I wasn’t necessarily aware of this when I was there, but it also seems to be a major hub for spaced-out weirdo psychedelic rock (people like Quilt, Doug Tuttle, The Prefab Messiahs, Blanche Blanche Blanche, Happy Jawbone Family Band). Can you talk a bit about your experiences in general as an aspiring musician there?

New England is a great place to grow up cuz you get the extremes of all seasons. That’s good for creativity. And boredom. And everyone was naked. Vermont is very into nudity.

Your tour this month brings you to the UK and Europe. What has your reception been like overseas? Are there any real noticeable differences at shows?

From what I gather, people don’t like rock music as much over there; it’s more about dance music. But we’ve had some good times. We met the mayor in some small town in Holland once.

And finally, what will Tuffy do to relax when all the touring and press madness is over?

Crawl back in the toilet from whence I came.