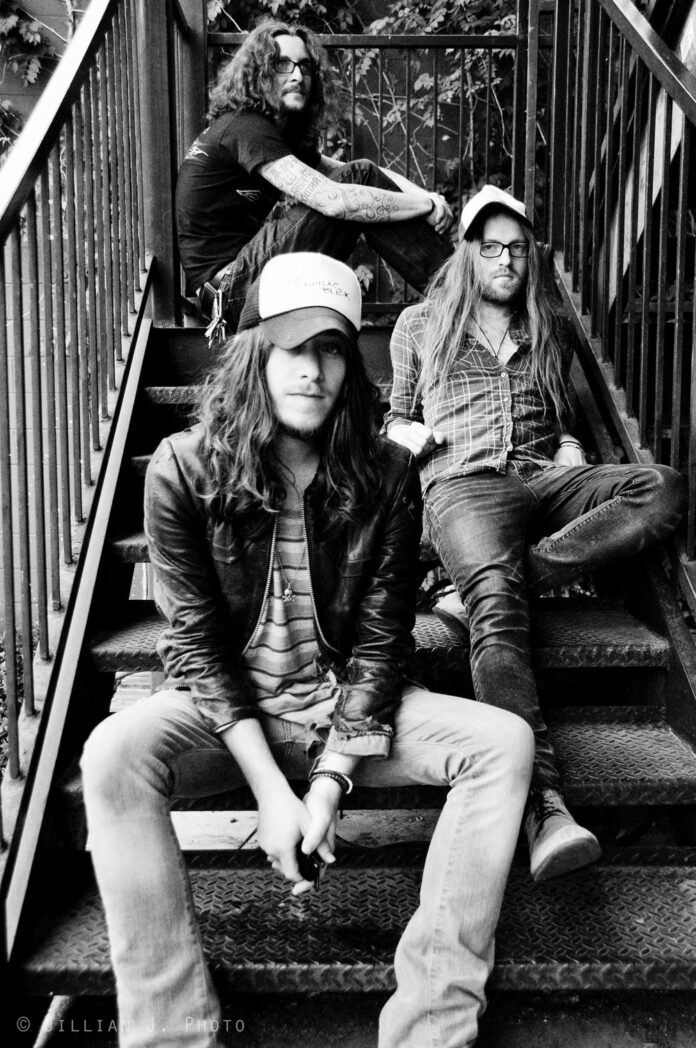 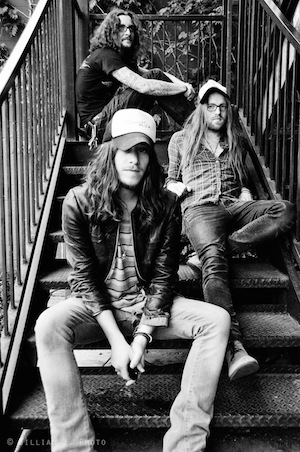 Jaren Johnston prefers to sing about things like “fighting and chickens” than break-ups or existential crises. And almost every single track on his band’s debut album mentions slugging whiskey. The Cadillac Three sound like they come from a hillbilly paradise, a place where you fall in love “faster than Willie smokin’ all that home grown” and where the muddy Mississippi waters can clear a man’s mind. With long hair falling out beneath their trucker hats and their drawling accents, the band might look like the archetypal whiskey-swigging redneck country band. But these boys have a gift for melody, hooks and lyrical imagery that could leave any rocker feeling mighty envious.

The trio’s heavy driving fuzz is much more akin to Blackfoot than Miranda Lambert, yet Jaren’s name has found its way into the song-writing credits of records by pop country’s biggest hitters. He’s written for the likes of Keith Urban, produced and penned for Dierks Bentley and has even gifted a few tunes to Kenny Chesney. None of these names may mean much to the average UK music fan (perhaps save Mr Nicole Kidman) but back in the States, these are some massive pop mouthpieces for any writer’s work. Yet by comparison, Cadillac Three’s output is ragged, dirty and rough; and refreshingly authentic.

The group is made up of Jaren on guitar and vocals, Kelby Ray on lap steel  and Neil Mason on drums, and they are far from first-timers. Before being called the Cadillac Three, they went by Cadillac Black. Before that even, the group had a fourth member and played under the name American Bang, touring around an odd breed of pop rock from coast to coast. The difference in style between then and their current incarnation’s debut, Tennessee Mojo, is massive. This is apparently down to a mix of Jaren’s country roots (his father Jerry Ray played drums for years on the Grand Ole Opry) and throwing a couple fingers up at the band’s former record label.

We caught up with the frontman while the group was swinging through London on their European tour.

How have you been finding the reception of the album?

Over here? It’s been great! We’d never been to the UK until December, and we didn’t really know what to expect. But then we got to that first show and there were people singing along to the songs in weird accents, and that was really cool! It’s been a blast, man!

Having seen you live a couple of times, I have to say that the production on the album, while very well done, is quite different to how you sound live…

It’s a bit heavier live, just because that’s where we gravitate towards, you know, it’s more energetic. We don’t use a lot of acoustic instruments live, and there is a lot of acoustic instruments on the album. We run acoustics through amps and shit, you know, and kind of dirty ‘em up. But it’s just not as fun, we like to play a little heavier live.

So how did you come to the decision to make it sound so differently on the album?

I grew up listening to country music and Nashville, Tennessee is a big place for it. We toured the rock circuits in the States a lot and I felt like we were missing a part of our heritage as far as growing up and listening to Lynyrd Skynyrd and all these Southern rock bands that made it work for the country fans too. So I wanted to make a record that was really two dimensional in the way that rock kids would like it and country kids would love it, Americana etc. Over here we get to be a rock band, it’s very fun.

The UK is notoriously a bit slow to take to country sounds. Have you been finding this and why do you think that is?

I think the radio here has a lot to do with it. The radio formats in America have the country format, which has like 200 stations across the country. But here you’ve got BBC 1 and BBC 2. I still don’t understand really how it works here, but there’s no real country market. It’s all thrown in there, you’ve got your Ryan Binghams, your Ray LaMontagnes and then you have the country like Miranda Lambert… they would probably play the same places.

All three of you were previously in American Bang, which had quite a different sound in comparison. How did the Cadillac Three sound evolve from that?

The Cadillac Three sound was what we sort of started as in American Bang, minus the lap steel.  We were just a four-piece rock band. But it was very Southern, kind of punk-influenced. Then we signed with Warner Brothers and we kind of got pulled in a terrible way, and we got away from our roots. So when we finally got out of that deal, I sat down and wrote that record just to be like “fuck you!”, you know what I mean? Then people started gravitating towards it – everybody liked it! And with Kelby playing lap steel and bass at the same time, it’s kind of made us step out a little bit.

Is it more country then because you are now down a member?

I think it’s more because a) I’m a better songwriter now than I was then, and b) this band is actually heavier than our last band but the songs are better and more driven towards that country lifestyle. With that other band I couldn’t sing about that as much because nobody really gave a shit in the pop/rock world.

Your dad is a country drummer and so you have quite a long-standing history with country music. How has that relationship evolved? Because you grew up with it, did you ever go through a period of hating it?

Yeah! And I think that’s why we sound like we sound because there was a time when I rebelled against country and Nashville and I jumped into Nirvana and Rage Against the Machine and it was one of those things. I was heavy into Metallica and Rage and that shit. But I think we sound the way we do because I do have that love for country from growing up with it.

It seems a lot of people are finding it hard to pigeon-hole you guys between rock and country, what area do you feel more at home in?

Honestly, we are right down the middle of both. It’s like vanilla and chocolate ice cream mixed together all swirled up.  Or like a peanut butter and jelly sandwich! It’s not on top of each other; it’s all swirled in. It’s like that! I think we fit in fine both places. And I’m fine getting up there and singing a country song that’s very Keith Whitley or Garth Brooks or something like that, but I’m just as cool doing ‘Start Me Up’ by the Stones. I think we’re right down the middle and it’s a perfect spot for us to be.

Man, I just fell into it. Being from Nashville and running in those circles, and I always loved a good story song. I started making friends with Kenny Chesney and Dierks Bentley and all these huge country stars, and I was writing with them and writing for them and they’ve all gravitating to what we’re doing. They like our band and they like our sound. I produced Dierks’ last  thing because he wanted it to sound like Cadillac! So it’s a real cool spot to be in and we’re real blessed.

How do you decide what to send out and what to keep for the band?

It’s tough! I don’t sing about what most… I mean if I was pitching to Garth or something like that… I don’t sing about right-down-the-middle stuff as far as country radio. But I write a lot of stuff like that because I enjoy that music. So usually it’s kind of set far aside what’s going to be ours and what’s not going to be ours. It’s like well that’s got a riff and that’s badass, and that one sings about fighting and chickens! I wanna sing about that! I don’t necessarily want to sing about a tailgate or a love affair. That doesn’t interest me at all.

I’ve also read about you working with and playing with Lynyrd Skynyrd, having been a long time fan, tell me a bit about that experience.

One of our first tours as Cadillac was with them and ZZ Top and we just started hitting it off. Neil and I wrote with them years back, but we never heard anything, but then they brought me out to work on the new record with them and I wrote two songs on the new record! So it’s been really cool.  I’m also a big fan of Blackfoot and Rickey Medlocke plays with Skynyrd, so that’s a pretty cool experience. I don’t know how many more records they’re going to make. They’ve got a lot of family and it takes a lot of money to fuel all that stuff so I think they’ll probably hang it up in the next couple years. I hope they don’t, but they’re getting up there. I get texts from them sometimes.

I do, I do. From Rickey and Johnny [Van Zant]. We even got a text from Billy Gibbons last night, while we were sitting with Chrissy Hynde backstage at the Shepherds Bush Empire. Really funny! Chrissy is an old friend of ours, when we were in American Bang we toured with The Pretenders, the whole States. She and my wife are good friends.

With Jake Owen grabbing some great airplay with Days of Gold, is it ever tempting for you guys to move into the more polished modern country fold? It seems your songs are quite successful there.

I absolutely love the album, and I feel like the imagery in it is so vivid – you can practically smell the whisky! Does the writing on this album feel more effective to you – by that I mean do you think the result totally does what you mean it to?

Haha I was going through a big whiskey binge. We wrote that record in like a week and recorded it in two days. That right there is a testament of what was going on at the time. I was very pissed off about our old label situation and I was having a blast touring just the three of us. It was some of the best times of my life. That record totally reflects what was going on right there. I think it’s amazing; turned out great! And we didn’t have to answer to anybody. We just cut the songs we wanted, recorded it, and put it out!

It seems like a lot of these tunes have been around for a while now. Is the next batch nearly ready? What’s next for Cadillac Three?

We’re about halfway through the new record. We have a new single called ‘The South’ that’s out in the States now. We’ll probably be done with the record this summer and the record will probably out late summer or fall. It’s probably going to be called White Lightning.