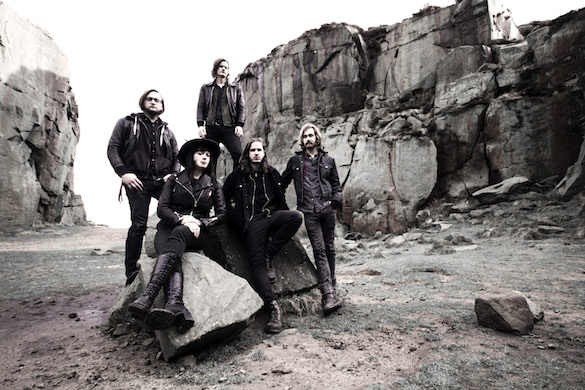 With their 2nd album, Condemned to Hope, due out in September Louder Than War’s Dom Walsh caught up with the Black Moth’s Harriet Bevan to talk about the album itself, Jim “Grinderman” Sclavunos and future plans for the band.

Released on London label New Heavy Sounds (Limb, Throne, Antlered Man) the album has once again been produced by Jim Sclavunos of Grinderman, Nick Cave & the Bad Seeds. It takes their “kaleidoscopic heaviosity and sepulchral style” to a “whole new plateau of riff-driven dementia” says the press release, as well as saying “It’s an album of fearsome drive and clandestine twists, skilfully sidestepping the cliché and heavy-handedness of delivery that often seems fit to destroy contemporary heavy rock ‘n’ roll from the inside out.”

Lofty claims indeed. Stay tuned to Louder Than War for a review closer to release date but while waiting for that read Dom’s interview below this video for lead single Room 13:

Louder Than War: For those that are unfamiliar with Black Moth, how would you describe what the band is all about?

Harriet: What we’re about? Hmm… I guess we’re just about satisfying our own riff-desirous whims and producing these little songs that make people want to move their bodies and throw the horns. There is an innate darkness to what we do, but never without a twist of humour.

How have things progressed since The Killing Jar?

Well we were extremely busy with touring and festivals for a while. We wrote a few new songs for our Too Pure single (Tree of Woe and Savage Dancer) but really had to focus our efforts on songwriting in just a few months before recording our second album. I think we learned so much from the first one that our songwriting skills were much better this time around, and we had a clearer idea of who we are and what we want to do. We’re also not kids anymore… we’ve had a lot to contend with as humans, and I’m sure the growing intensity of our lives has fed into our songwriting.

How does the band go about writing songs? Is there a particular way in which you go about the process?

Somebody brings a riff to rehearsal, we jam it out and it all starts to come together organically. Sometimes it takes a couple of hours, sometimes it takes weeks of slogging at it. I write the lyrics at home though, in isolation. And drive myself half crazy in the process.

Lead track, Room 13, is a fantastic and crushing piece of hard rock. Why did you choose to lead with this particular track?

Well I’d say pretty much for the reasons you just mentioned… We didn’t want to introduce people gently, better to slap them round the chops with it! We actually streamed Tumbleweave before releasing Room 13. I think the 2 of these tracks together encapsulate the albums two extremes of horror and absurdity.

Jim Sclavunos is once again at the helm. What does he bring to the table when in the studio?

Impeccably high standards, an experimental, creative approach, an imposing, cool father figure we secretly want to impress and a hell of a lot of weird YouTube videos to entertain us between takes.

Where did the inspiration for the album title come from?

I honestly can’t remember… starting to think I may have dreamt it. I was thinking a lot about the human condition and how man often finds himself swinging on a pendulum between hope and despair. An existentialist might argue that “until there is no hope, there is no hope.” I wonder why we torture ourselves with fantasies and impossible desires, when there is so much splendour to be derived from the present moment.

And what can you tell us about the stunning cover art?

Well, it is unmistakeably Roger Dean. I still can’t quite believe we have our own, specially commissioned Roger Dean artwork… it truly is a dream come true. I’ve been a massive fan of his work for as long as I can remember and I feel that his interpretation of my ideas is even more perfect than I could have wished for. I met Roger in Brighton with his brilliant daughter Freyja and our official photographer, Kirsty Garland. We had some wonderful chats about life and music, music and life. I talked about our themes, lyrics and what I liked about his style, and with a list of key words I had mentioned, Roger got to work. I love how he employed the image of faceless, nameless soldiers marching into oblivion. It somehow seems to sum up the mood in a way I had never even thought about.

Whilst having obvious Sabbath and Stooges like influences, are there any contemporary bands that have influenced you on Condemned to Hope?

That’s a tough one as we’re all huge music fans and consume a hell of a lot it. When you listen to such a volume of stuff whilst at the same time writing over a period of time it’s hard to single out which of the bands creep through into your own work. We don’t start a song by singling out a band we’d like to sound like. I suppose we subconsciously see where our sprawling mess of ear candy takes us!

Some of the bands that we listened to a lot of, toured with or went to watch live were Mastodon, Red Fang, Pissed Jeans, Drunk In Hell, Kvelertak, Uncle Acid & The Deadbeats, Turbowolf, Blacklisters, Nick Cave and The Bad Seeds, Swans, Bo Ningen, Goat and Arabrot. L7 will always be a massive influence to me.

Aside from the obvious influences, are there any ‘curveball’ influences?

Again, it’s hard to say what is an influence and what is just another of my bizarre interests. I can tell you I listen to a lot of Om, Bohren & der Club of Gore, Exuma, Yma Sumac, 60s/70s asian disco/psych/funk, early glam rock and black metal. If that sounds haphazard that’s because it is.

What can people expect from Black Moth in the future? Will you be touring the new album?

Absolutely! There are some UK live dates to be announced shortly, and we’re working on some Europeans shows as well. Also hoping to hit the festival circuit hard next year!