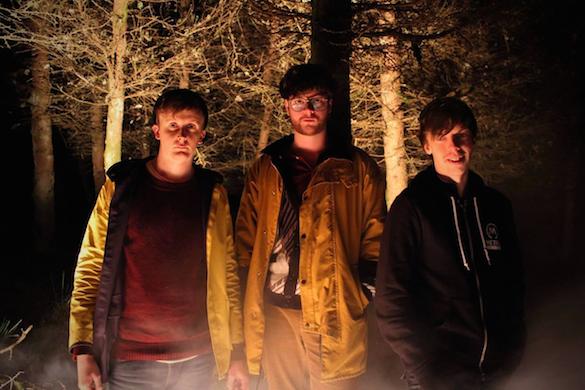 Katie Clare catches up with the Scottish electro-indie pioneers on the cusp of their tour of Japan, and discusses the culture shock, new music, the price of whiskey and that Kenny G collaboration…

After managing to get across Tokyo through the aftermath of two heavy blizzards I find myself in a snow surrounded portacabin around the back of Studio Coast with Glasgow’s Errors: everyone is aglow from their audibly dynamic and tantalizingly bouncy performance that has just opened Hostess Club’s 7th Weekender. After a year long hiatus Simon Ward, Stephen Livingstone and James Hamilton now comprise the Errors line up and I’ve heard they’ve been working on their fourth studio album, but first I want to hear about their experiences so far in Japan.

Stephen Livingstone: We arrived on Tuesday, played in Tokyo Wednesday and Osaka on Thursday with Chvrches had a day off Friday and got completely and utterly ….

SL: We went by Shinkansen to Osaka, it was fast but didn’t feel that fast because it was so smooth.

James Hamilton: You do get a lot of leg room, if they had that on the plane it would be perfect.

Louder Than War: A few more years and we’ll have the MagLev.

SW: Was that the floating one with no friction whatsoever?

SL: That’s not got disaster written all over it.

JH: In general it has been pretty much all a culture shock after arriving at the hotel we decided to go out for food: stepping out of the hotel there were people waiting for us who brought us presents and wanted autographs  – it’s just not something we’d experienced before. We went out in Shibuya going in to the restaurant it was light but coming out it had gotten dark and it was a sensory overload: all neon lights and trucks with music videos playing.

SL: It will take me a few weeks to make sense of what’s happened, because right now I can’t process it all.

SW: We did karaoke in this building that was 7 floors high with more than 10 rooms on each floor. We sang a Chvrches song we’d found. We’ve got a video of it and it’s terrible; Chvrches would be disgusted with what we did to their song.

JH: In Osaka we went to Bar Rock Rock. Doherty from Chvrches said we had to go there as it was the best night out he’d ever had and it was his favourite place. I don’t know what I was expecting but it was this dive bar the size of this dressing room. There were four European metal bands playing Osaka that night they were all in it – huge guys with beards taking over the dance floor and I don’t think our requests for old school 90s RnB were going down to well.

SL: I know this is off topic but I want to tell you earlier. You know the definition of literally has now been officially changed it no longer means literally anymore.

SW: It must mean figuratively now.

LTW: So many misused and abused words: I hate epic.

LH: You get a text I had such an epic night last night. What? Did Cecil B. De Mille direct you drinking in the pub?

SW: Random I feel I could come round too again; in an ironic sense at least there is a culture around it.

LH: We were watching Curb Your Enthusiasm where Larry is going on about how much he hates the smiley face and I found myself agreeing with him although if they had a smug smiley I’d be in. I’d make my fortune if I could make a really good smug smiley.

SW: If we could conduct this whole interview in text speak it would be epic.

LTW: If we do we could toast ourselves with some of the Mogwai whiskey they have here today.

SW: Did you get some?

LH: I don’t mean to sound disparaging at all but I just feel it has to be not that great: it could be that it’s some shit from some distillery that was getting rid of some barrels.

SW: It was about £55 a bottle back home which is a lot for a bottle of whiskey.

LH: You could get a really good bottle for £55. When I saw that I thought what we should do is get loads of Tesco own brand lager and slap on ‘Errors Beer – brewed for 5 minutes in our own fridge’.

SW: Maybe we should get a home micro beer kit and make Errors beer.

SL: We need to branch out bands don’t sell so many CDs these days.

LTW: What would be the flavours find in Errors Beer?

SW: I think it should taste like a hangover; a pre-view of how you’re going to feel tomorrow.

LTW: Brewing plans aside where are you on the fourth album?

SW: We’ve been writing for a few months – once we get back we’ll start piecing it together.

LH: We write individually so once we get together we can decide ‘does that or that go together better’. It can take a while to piece together and then usually 2 days before we finally record stuff. It’ll all get changed – a lot.

SL: It’ll all change up to the last minute we just can’t say what it’ll sound like.

SW: We don’t have to go in the studio these days to record.

SL: We can sit on our bedroom; it’s easier to write where you’re comfortable. We did have time in the studio to write an album – the first one – and that was such a waste of time and money.

LH: Having the time off we’ve had was pretty good. We decided to have about a year off.

SL: I really enjoyed it, I didn’t know what we would really do with that time off, I kind of rediscovered music in a way. Listening to other bands up until that point I’d been quite lazy about new music – for years even. Being obsessive about listening to music again made me go ‘ahh I know what I want to do now musically’.

SW: I kind of spent the year hating music.

LH: So I guess it’s going to be something of a love/hate record. In 2012 we had pretty much done ourselves in: releasing two albums and so much touring by the end of the year we were like ‘enough’ but by February it was like ‘man I want to get out there again’.

SW: I was happy making bread, in fact our old guitarist is a dentist and he’s mentioned packing it all in – the dentistry that is – and opening a pizza restaurant, I could make some bread for him.

LTW: These different avenues your each coming into the album with could end up producing an interesting mix.

SW: I feel more relaxed now that my mind is clear and that there is not so much pressure there. I can take some time to think about it. We’ve got some fairly big ideas for some tunes such as getting a local choir for some of them. In the past there just wouldn’t have been any time. I feel because this is the fourth album we can do some bits that are really pretentious.

LH: We are at the point where we can push the boat out.

LTW: Will there be room for collaborative work too?

SL: That is definitley the sort of thing we’re looking to do.

LH: Well he may say Kenny G but I want the guy from The Lost Boys film – he looks a bit like Michael Bolton, he was apparently Tina Turner’s touring saxophonist, anyway he’s playing at an outside gig in The Lost Boys doing this song ‘I Still Believe’ both singing, playing as well as being dressed just like a wrestler.

SW: Okay I might be joking about Kenny G but we definitley want to incorporate a saxophone.

At this point the draw of the snow with its opportunities to make a snowman wins out: with cans of beer in hand and inappropriate footwear it’s off out into the bright but cold Tokyo evening.

While waiting for their new releases you can enjoy some of their music on their SoundCloud. Meanwhile the Errors back catalogue is available on iTunes.

Interview by Katie Clare whose Louder Than War author’s archive is here.