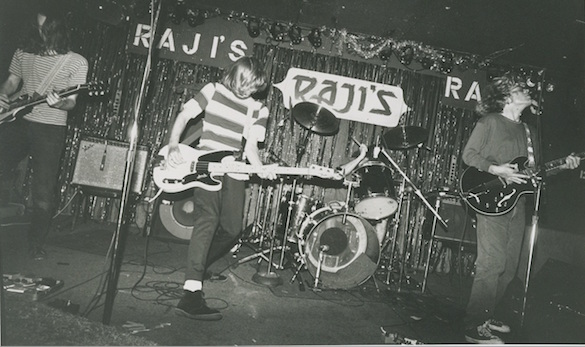 West coast indie rock band Further, who formed in Los Angeles in 1991 and were effectively introduced to most of us in the UK through “Uncle” John Peel (for whom they recorded a session) and Alan McGee (via an umbrella label, Ball Product, of whose Creation label they released music) have a compilation reissue of their best singles and EP tracks from 1991 to 1997 due out in September – and today we’re thrilled to be able to exclusively premiere a new track off it for you. Check out Spheres Of Influence below.

Further were stalwarts of the LA indie scene back in the 90s and helped define the DIY, lo-fi sound that dominates Southern California even to this day. They shared bills with the likes of Pavement, Beck, Flaming Lips, Mercury Rev, Royal Trux, Urge Overkill, Archers of Loaf, Codeine and the like. They also shared a lot of similarities with Dinosaur Jr and were invited out to tour with Lou “Dinosaur Jr” Barlow’s band Sebadoh ostensibly to spite Lou’s ex-bandmate J Mascis as he thought it would rile him.

Despite all the above, though, and the fact that they released on Creation umbrella label Ball Product, Fierce Panda and numerous US labels, Further’s legacy has remained as obscure as their records. Until now that is. The tracks on the soon to be released compilation have been handpicked by Bad Paintings (the label who’re putting the compilation out) and have been whittled down from 60 tracks to a collection of songs featuring the best of the band’s singles, all remastered from the original vinyl.

The track we’re premiering for you today is typically Further, featuring drawled vocals, a guitar sound that hearkens back to 1960s and ’70s classic rock and that is characterised by extensive use of feedback, fuzz and distortion.

The album Where Were You Then? will be released on 1st September via Bad Paintings.

You can pre-order it on these links: Vinyl, CD and iTunes.

The full tracklist follows this stream of Spheres of Influence…