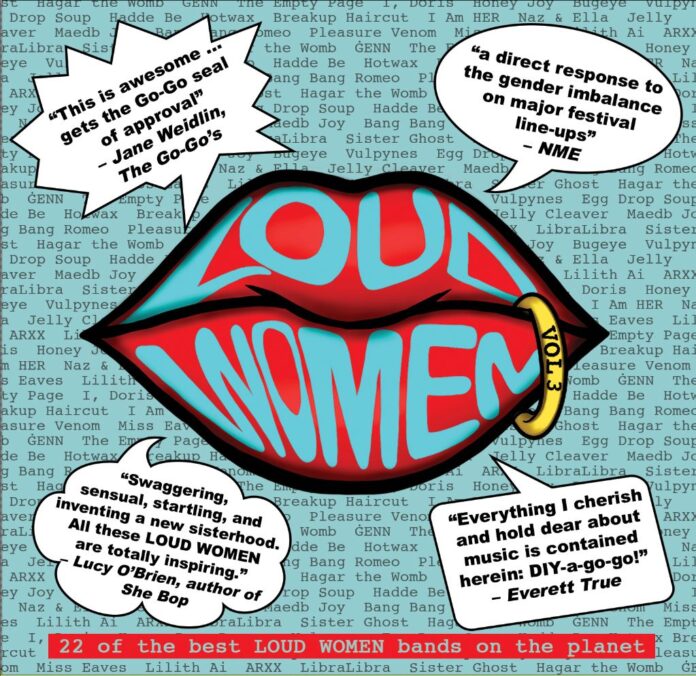 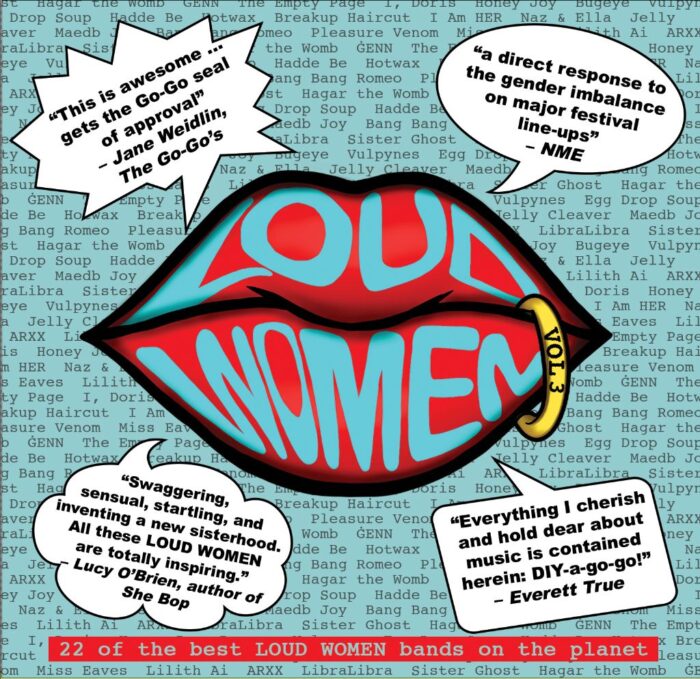 Loud women everywhere, rejoice! A diverse and extensive compilation featuring roaring and powerful vocals, guitars, drums, and so much more from a wide array of women artists.

The eclectic genres and forms featured on LOUD WOMEN: Volume 3 makes this an album where extraordinary women musicians across time and space would have felt at home, from Nina Simone to Joni Mitchell to Grace Jones to the Go-Go’s to Bikini Kill to Björk. And the featured musicians hail from various cities and towns on both sides of the Atlantic.

Let me just say first: I was so thrilled to see Hagar the Womb on this compilation, and I love the featured song Visible Woman. If you don’t already know this anarcho-punk band that formed originally in the early 1980s, you’re seriously missing out. Be very glad that LOUD WOMEN is here to expand your punk vocabulary.

A number of the tracks feel like homages to some of my favorite women-fronted grunge and pop-punk bands of the 1990s, conjuring the vocals of Kim Shattuck, Dolores O’Riordan, and other female lead singers I saw live and still can’t believe are gone. On the compilation, I’m thinking specifically of Sister Ghost’s Bruised Fruit, The Empty Page’s When the Cloud Explodes, Hadde Be’s Another Life, and I Am HER’s Big Monster. In an alternate universe, each could find their way onto some of the best and most memorable film soundtracks of the ’90s — Clueless, Reality Bites, and Empire Records, to name a few.

Beyond giving me a chance to indulge in my nostalgia for the early-to-mid ’90s, this LOUD WOMEN compilation also offers some definitively twenty-first-century tracks. In terms of fierce women’s vocals, I’m completely enamored with Pleasure Venom’s Fascist. And when it comes to women musicians leaning into both the power and humour of song, I wholly endorse LibraLibra’s Panic Buy and Breakup Haircut’s Why Can’t I Be Cool Enough to Move to Berlin. (Reader, a confession: I’ve now listened to that Breakup Haircut song 10 times or more. I can’t get enough.)

The compilation also reveals how women performers are engaged in interrelated pursuits despite seemingly disparate sounds. Lilith Ai’s bluesy, funky Warrior Queen might not share sonic resonances with I, Doris’s electro-pop-punk Wonderwoman, yet both drive toward shared ideas. The last track on the comp, Maedb Joy’s The Unconventional Feminist, is a work of spoken-word poetry that also engages in dialogue with Warrior Queen and Wonderwoman while taking a vastly different form. And in a more unlikely aural pairing, Miss Eaves’s 3 Jobs has clear content connections with the lyrics of Egg Drop Soup’s Hymen, the latter entering our ears with death-metal vocals and heavy basslines. Then, too, there are cross-compilation connections in sound alone, from the powerful and salient vocals in Bang Bang Romeo’s Stone Cold Superstar to the jazzy crooning in Jelly Cleaver’s Ego.

Most of the songs on the album were released over the last couple of years, with some appearing as singles quite recently. Lucky for you, they’re all gathered here on this new LOUD WOMEN compilation. You can buy it as a CD or download exclusively on Bandcamp.