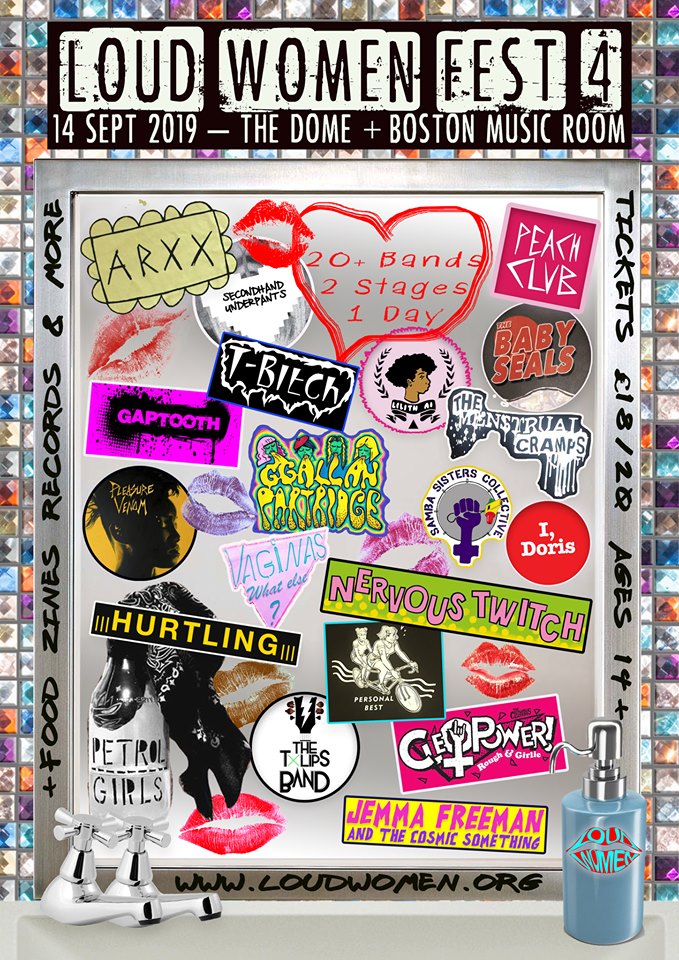 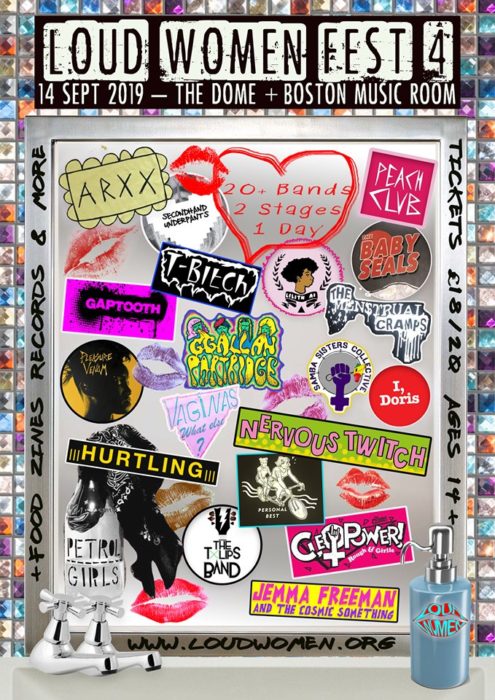 Women with guitars have been making a lot of noise in 2019.

For noise – read music, art and speaking out / kicking back… The Menstrual Cramps laying into right-wingers and bigots in the shadows at Rebellion,  Lauren Tate from Hands Off Gretel speaking out, the Solidarity Not Silence court case… The success of the Hell Hath No Fury label/fest,  the forthcoming Boudica  and Hear Her festivals,  … and of course the inspirational London-based collective Loud Women continuing to do their bit…

This Autumn, music collective LOUD WOMEN celebrates 4 years of banging the drum (and shredding the guitar) in the name of womankind!  Founded by musician Cassie Fox in 2015 as a response to the lack of female representation in music – from grassroots level up – the group has since:
• hosted 85 events at various venues around London – including the Hope & Anchor and the Royal Albert Hall
• given nearly 200 bands and solo musicians a chance to perform
• formed new chapters in New York, LA and Australia

The 4th annual LOUD WOMEN Fest happens this year on 14 September at The Dome, Tufnell Park, London N19 with the most powerful and most international lineup yet of the very best alternative music powered by womxn and non-binary musicians.  20+ bands will perform over 2 stages, over 1 day:

There are four who featured last year, Petrol Girls, the Menstrual Cramps, Jemma Freeman & the Cosmic Something and the Baby Seals so that means at least sixteen new bands from all over the world to check out.

Like last year, Ged Babey, a private in the Loud Womens Male Auxillary  ( I am a lowly worm / I will stand at the back)  picks Ten of the most interesting and exciting bands -who have videos – but that doesn’t mean to say the other bands aren’t completely fabulous too.

From Turkey come the brilliant but appallingly-named Secondhand Underpants.  “So killer. Off-kilter, wild sounds that remind me of the Lunachicks / L7 era of CA punk, super lo-fi rampage, tough girl vocals and yowling guitars”  said Maximum Rocknroll.  Bound to be a highlight.

From Italy the wonderful-sounding Cleopatras. Power -pop-punk with Ramonas style chug and a surfer-grrrl vibe.  Such a great sounding band. Immediate, vibrant and fun… with candy-coated gender-political sentiments needless to say.

Jemma Freeman and The Cosmic Something are a band I can’t wait to see. This video is an epic horrorshow. The song so short you have to listen again the second it finishes.  There is an album on the way.  Proving psychedelic mindfuckery isn’t a boys game.

The Txlips (from the USA) sound incredible; psych, prog, metal, punk, soul sisters – incredible rock musicians on a mission.  This track sounds like a lost Deep Purple number. Queens of The New Age is the title of their album.   Women of colour who are set to compete on a stadium-level as that is the kind of big-soulful-rock they play.

Peach Club are a “4-piece activist riot grrrl band from Norwich” who one minute sound like PJ Harvey, the next like Skunk Anansie – in the space of one song. I need to hear more – but definitely one to watch and not your average ‘riot grrrl’ band.

Pleasure Venom are gonna rock the joint to its foundations. A pure MC5 rock’n’roll riot fronted by Audrey Campbell …. read about them here  where they say “We are black, women, queer, and non-binary people enjoying life – no need to end in bloodshed or imprisonment when we have no intent to harm a soul.”

GGAllan Partridge???  What a bizarre band name that is!  I can hear the influence of loads of girl-punk-bands from the past and Anarchistwood from the present. “Gloriously off-kilter dayglo girl-gang riot of pop and politics, bad dates, and worse mental health… your new favourite band.” said Lee Fisher in Narc Magazine.

Nervous Twitch are the sound of young Leeds. Indie-punk naivety but fresh-sounding and world-beating stuff.  Great ‘Ashley Too’ hair too.

I, Doris are “Mummycore riotpop kitchenpunx” who feature Cassie Fox in the dinner lady tabard wearing line up. They take on the Squeeze classic and re-tell the story from the female perspective.

And as a bonus track I give you the immeasurably brilliant Menstrual Cramps, caught live at Rebellion, with their consent anthem, Mo Means No….

The complete Line Up is

A second Compilation CD is out soon too – and an ‘unplugged‘ night on 22 August.