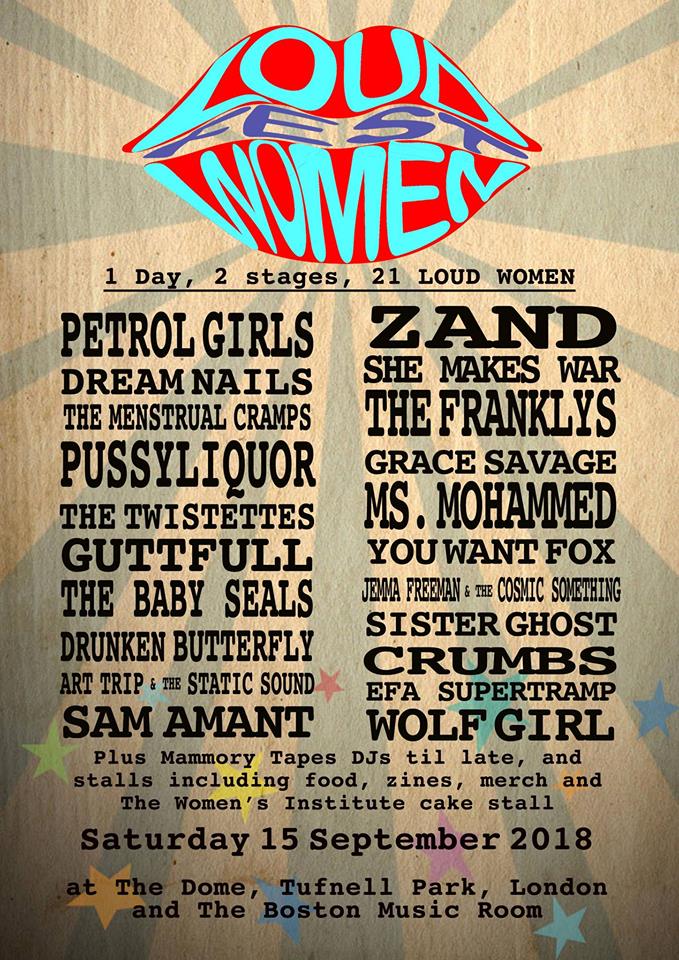 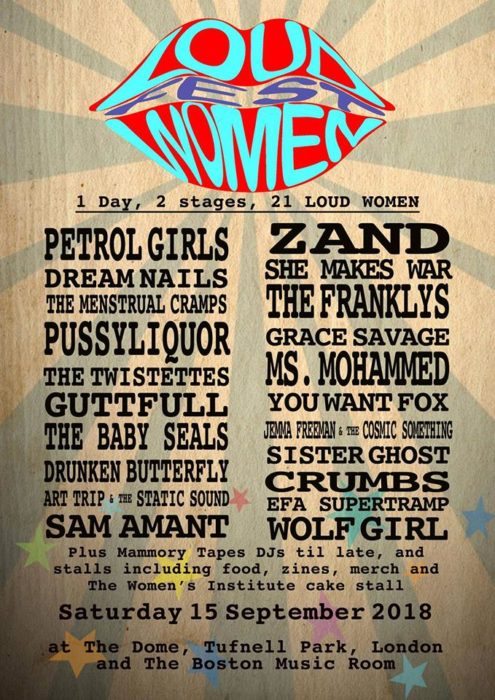 “Awesome crowds, amazing bands and one of the most supportive promoters you’re likely to meet.”

“Real feminism and sisterhood in action with a rrriotous score.”

Just a few of the things women in bands and the audience have said about Loud Women…. but who are they?

LOUD WOMEN is a group for all those who support putting women on stage, and turning up the volume. It’s a not-for-profit initiative run by Cassie Fox with help from some brilliant friends. LOUD WOMEN projects include: regular live music nights in London (and some beyond), a Facebook group, an e-zine, a Record label… and its annual Festival..

The 3rd annual LOUD WOMEN Fest!  20 acts in 1 day, over 2 stages at The Dome, Tufnell Park and next door, Boston Music Room.

This year, we’re taking over The Dome, Tufnell Park and Boston Music Room. Using these two amazing, world-class neighbouring venues we can keep the music constant throughout the day, and make our Fest bigger and better than ever!

And here are my pick of the Top Ten Bands I want to see at the Festival  ( but hey what do I know they ALL sound great..)

Reviewed here, Cassie Fox said – the point of this band is feminism, delivered to your skull and your heart via an extraordinarily-talented hardcore punk band.  They do sound absolutely awesome and worthy bill-toppers.

First covered by Louder Than War two years back – She Makes War are a superb grunge pop act who should be massive.

Favourites of LTW’s Phil Newall who’s review of their new album is due any day now.  Here is a taster.  In the same vein as Shampoo and Fuzzbox perhaps but with a bit more 21st century attitude and on a mission to have fun.

Brighton-based Riot Grrrls with a lot of attitude and a sound akin to the wonderful, shambolic but wonderful Voodoo Queens who some of us remember with a lot of affection.

Sister Ghost sound like an amazing prospect who will come into their own live…  They have been compared to Sonic Youth Meets Sleather Kinney and bizarrely  ” Joan Jett, Donita Sparks, and Joe Strummer rolled into one”.

Foul-mouthed, out of tune funk-punk racket made by nasty, dirty girls with bad hair and terrible dress-sense…. Fuckin’ Love It!   The disappointment that they are NOT a Lesbian Cramps Tribute Band only lasts a few seconds once you hear them….

Yet another Bristol-area band – the young and very brilliant Drunken Butterfly.  Personally I imagine that bands like this are why LOUD WOMEN exist. So young female bands can play in a supportive environment without sneering soundmen and cocky rock school boy bands mocking them… and so that female punk bands like this exist and continue -rather than bands like the S*x P****ed D*lls and The S**p G***s who trade on good old tits and ass rather than moving things forward.

Jemma Freeman and the Cosmic Something

There are literally hundreds of new and old Psych bands around and for the most part, it’s a very male scene – so I’m pleased to see this band included on the bill.   Check out their work in more depth here.

Full-on Empower Pop is how Cassie describes the marvellous Baby Seals here. “The songs are strong and dancey and perfectly executed, and the biting lyrics genuinely hilarious. But these funny women are not laughing at themselves: they’re inviting us to join them in laughing at the ridiculous policing of women’s bodies…My Labia’s Lopsided, But I Don’t Mind spells out their agenda in mile high neon lights”   Too. Much. Information!

Get the last few remaining tickets for LOUD WOMEN FEST 3 from here – now.

All words and choices Ged Babey – except where specified.