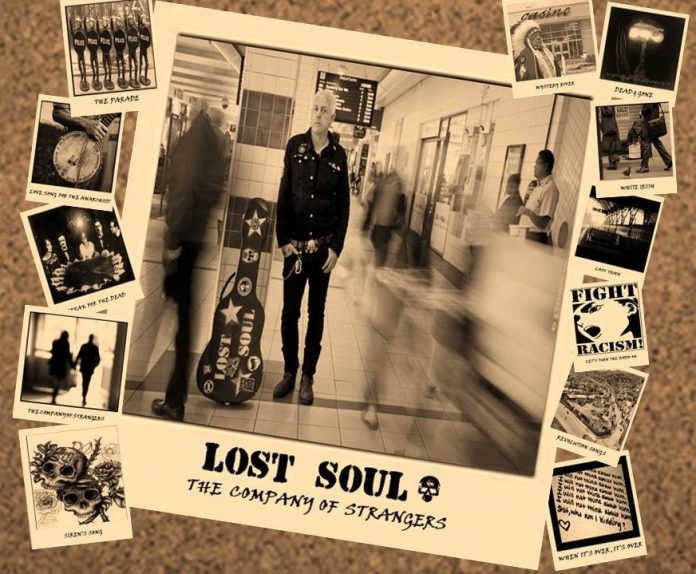 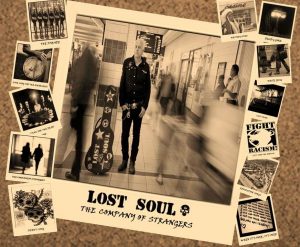 Lost Soul ”â€œ where to start when you are in the presence of a prolific and talented song writer of this calibre? Hopeless dreamer, naÃƒÂ¯ve fool or fucking genius. You are free to make your own mind up.

I suppose that writing about Lost Soul is like trying to find the truth in the bottom of a bottle of vodka. It’s challenging, mysterious and sometimes it hurts – in the sense it can be hopeless to try to fully understand his universe, unless one is willing to sell their soul to his devilishly endearing alter ego. No matter the size.

Wayne Lost Soul – also known as the front man for hard hitting punk band Kings Of The Delmar – has previously released three warmly welcomed pieces over the last 15 months (”ËœThe Road’, ”ËœNot In My Name’, and ”ËœOne Of Our Super Heroes Is Missing’).

The adventure began in 2009 when first class globe-trotter Wayne and his second self Lost Soul started to perform in European clubs, sharing their girlfriend folk guitar, self-belief and their passion for words, clearly and shamelessly displaying their double life and their dissociate identity disorder. Now one of them is striking again and even harder as he’s about to throw at us another one of his gems just like you would throw a fat bone to a starving (wrath wrath) dog.

Twelve sinews of war are articulated around the spinal 4th album entitled ‘Company Of Strangers’ – made of energetic blues, country, and folk-rock melodies. Given the quality of the sound arrangements, combined to squarely built up songs, and carefully thought lines, I would say this is, without a shadow of a doubt the most achieved and accomplished form of his art so far. For everything there is a time”Â¦

With his realistic drumbeat-lyrics, gifted Lost Soul and his work are to me like an extension of the anarchist school of thoughts and if you knock on his door late at night, a proud Proudhon with a copy of “The Principle Of Art”Â tucked in his leather jacket might open the door and invite you in to gather around a glass of moonshine; as with Lost Soul it’s all about sharing.

Apolitical and atheist Lost Soul is known for his strong engagement ”â€œ the right for everyone to be different and to be free, whatever it takes – and the way he stands up for the values and concepts he believes in ”â€œ fight, peace and pride. He still puts faith in human nature despite his strong disliking of our dysfunctional system as a whole, hence a beautiful, straight to the point album that sounds like the last outlet. This is serious poetry we’re talking about here. Let me take you on a colourful and introspective journey”Â¦

All the vilest by-products that our dear declining society vomits are dissected with a sharp pen knowing with accuracy who’s wrong and what’s right. Demons wrapped up in a warm coat of poetry are still demons whether they are called war, injustice, debasement, fear, hatred, betrayal, death, racism, homophobia”Â¦ and you can meet up with them throughout “Company Of Strangers”Â (and also Lost Soul’s previous releases).

The punchy ”ËœDEAD AND GONE’ opens things up, pointing with conviction an accusing finger at a resigning government while tempted to surrender (I sometimes wonder if I should just give in / our stupid leaders they lead us into war / I’ve had enough). This notion of constant dilemma and indecision recurs throughout Lost Soul’s art, and can be found in many songs of his. However, not everything is dark in his world: even when disheartened, hope and a survival instinct are always present – like in ”ËœTHE PARADE’, a song that denounces the violence and brutality of the forces of law and order turning against the crowd while we are encouraged to stay strong and to keep fighting for freedom (they brought their batons down / don’t let them tell you that your freedom ain’t worth fighting for / come and join the parade / come and make a difference to your world).
”ËœREVOLUTION SONGS’ gives us a fair glimpse of what’s in Lost Soul’s mind: a protestor who never gives up on faith (they’re all the same the liars, cheats and thieves, the slate it cannot be cleaned / So here I sit just playing my guitar / singing songs trying to change the world/ I’m singing revolution songs down in the barrios) and a thinker who’s not afraid to kick your arse as long as he gets a reaction (how can you say that my beliefs are better left unspoken / I disagree just let it out / it stops your heart from ever getting broken)”Â¦ the world is not getting better so Revolution Song is a kinda getaway and we have here two chin up songs urging us to raise our fist to”Â¦

Opinionated Lost Soul is an idealist, a convinced believer and a deeply angry poet with an attitude who paints with no indulgence the portrait of our mad era illuminating all the wrongs it involves: human misery most of the time but also love, sympathy and friendship like in ”ËœLET’S TURN THE RADIO ON’, an attempt to find again in an old friend, unhappily enrolled and whose “eyes are dead”Â, the joyful feelings of the carefree lifestyle that the two young men had back in their lighter days (let’s turn the radio on /these songs they never sounded so good / they make me think of when we were young and life was always so much easier /”Â¦ cause life doesn’t get easier). ”ËœWHITE IRISH’ is a sympathetic, bitter sweet ballad to assess the precarious situation of those who didn’t make their American dream come true. Unfortunately this can be extended to most of the immigrants of many countries (cause their dreams always seem to come true / but what you don’t see is a whole other world / where everyday is a fight to survive / in the land of opportunity they’re sleep out in the streets/ ”Â¦ and salute the great flag with a smile on your face / hallelujah boys for the red the white and the blue”Â¦).
All along, death is like an obvious shadow sticking to the background picture, and as sad as it can be it’s not necessary a negative subject or an end in itself: ”ËœMYSTERY RIVER’ may be nothing more than what is suggested, just a terrible story but some might read more into it and make a parallel with the writer’s unstable past. You decide. ”ËœSPEAK FOR THE DEAD’ is quite an introspective song (inspired by a TV ad) in which feelings of powerless compassion are expressed with a great sensitivity and almost in a vain way (I speak for the dead / I hear their words tonight /”Â¦ I’ll hunt them down / I’ll have these hateful fools / And I’ll collect on the price that you must pay / ”Â¦ They’re screaming out “what about you? And what about me?”Â). Surely you couldn’t be that concerned and affected if your heart was not true to this world.

When you are a loaded gun there’s no beating about the bush, there’s no denial or way out and if reassurance needs be, I recommend you take a close listening to the title-track ”ËœCOMPANY OF STRANGERS’ as it speaks for itself and is probably a good summary of what Lost Soul is all about. He gets his point right across and spits out a raw truth. (Don’t really care if no one ever likes me / I don’t need my friends to tell me that I’m wrong / It’s my life I live it how I want to /I’m only happy when I sing these songs). I warned you.

There’s no room for stoicism and indifference in Lost Soul’s world, especially when it comes to the fantasy of unconditional love and sentimental reflection (often mixed with the concept of death). Lost Soul finally gives in and unveils his vulnerable self and it’s a skinned alive lover that bares his soul (which I suspect is not that lost after all) in the heart breaking ”ËœLOVE SONG FOR THE ANARCHIST’ (I just know that I love you / I wanna hold you in my arms for a lifetime/ I’ll be there to make your sunrise/ I’ll make you happy when the rain comes pouring down / cause your smile it could melt the coldest heart). It says it all.
If it’s not enough to quench the thirst of every secret romantic inside us then the moving SIRENS SONG’ might do the job. Tamed, tortured and on edge Lost soul cries out for love with accents of desperation, even if he has to surrender (would you tell me that you love me then slowly walk away? / is it over oh sweet siren? / tell me is this how hearts break? / if you took me to the hangman / put that rope around my dreams). It may be hard to find the answers to those questions; but questioning is a start. Suffering makes you feel alive even if love is the most lethal of all the poisons.

I like the pleasantly surprising contrast and how those love songs outbalance the cynical and cold part of the character. Deluded Lost Soul has a true heart but will he kill his relentless inner conflicts? All the frustrations are dragged out into the light in exalted ”ËœWHEN IT’S OVER ”Â¦ IT’S OVER’ – one of my favourites – (nothing lasts forever / I’ve heard it all before all these lies you’ve been given / love aint made forever / I know he’s been cruel but no one ever dies from broken heart”Â¦/ and I don’t really care if you never meet another cause I loved you from the start but you treat me like a brother). The beautifully constructed and furious ”ËœLAST TRAIN won’t disappoint and it’s another great adrenaline rush for me (I’m never going to forget all the tears I’ve cried / and as I leave this Delmar town, the lies you told won’t bring me down again!!).

At the end of the listening it left me thinking that principles and values are all in order: Lost Soul believes in his own concepts and theories and passionately refuses to compromise. Like it or leave it.

He constantly oversteps the mark, using well planned provocation as a play-ground, not that he wishes that much to be in your face like an annoying little itch: there’s nothing wrong in trying to engage people in getting a reaction. ”ËœCompany of strangers’ is a devastated country trying to rise from its ashes again, and each song is a piece of fertile land planted with the growing seeds of faith and hope.

When I’m travelling across them they lead me back to my past and there I wander bathed in turns with feelings of joy or torment. Surely I won’t be the only one to do this no return trip. Enjoy a fantastic voyage in the company of strangers… And for those who might think that being proud means being arrogant and that being confident means being conceited, well don’t jump too easy to conclusions, think twice and make the effort. Get yourself a break and a nice cuppa and let yourself go”Â¦