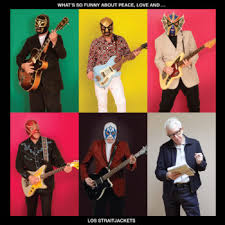 What’s So Funny About Peace, Love And Los Straitjackets

After several years backing Nick Lowe on his US winter tours, Los Straitjackets finally put their own spin on Basher’s back catalogue to tape. Louder Than War’s Craig Chaligne reviews.

The collaboration between Nick Lowe and Los Straitjackets started when they backed him at the 15th anniversary bash of their label YepRoc. What could have been a one off has turned to be quite a successful collaboration as the surf rockers have joined Lowe on several tours he did over the last years in the US and in Europe during the festive season. The band’s knowledge of the bard of Brentford’s catalogue developed as setlists were rejuvenated and rejigged. Finally last year under the supervision of Neil Brockbank (Nick Lowe’s longtime producer and sound engineer), the band put to tape a selection of thirteen instrumental version of Nick Lowe songs. The album sports a tongue-in-cheek sleeve paying homage to Lowe’s first LP “Jesus of Cool”

What could seem a rather odd idea (after all the quality of Lowe’s lyrics are a big part of his song’s appeal) turns out to be a resounding success. If there are some tunes that seemed clearly fitted for a surf instrumental treatment such as “Heart of the City” from Lowe’s Rockpile days or the jaunty “All Men Are Liars” (Rick Astley’s favourite song), some other inclusions such as the gentle “You Inspire Me” from 1998’s “Dig My Mood” or “Lately I’ve Let Thing Slide” from 2001’s “The Convincer” show that the band has managed to appropriate themselves Lowe’s catalogue with gusto. The slowed down version of Lowe’s biggest hit: “Cruel To Be Kind” almost emulates the way the great man has constantly reworked his songs in a live setting over years. A slightly Bossanova-ish version of “Checkout Time” from 2011’s LP “The Old Magic” is also a radical departure from the original version. The album almost acts as an alternative Nick Lowe Best Of as it covers every era of his career.