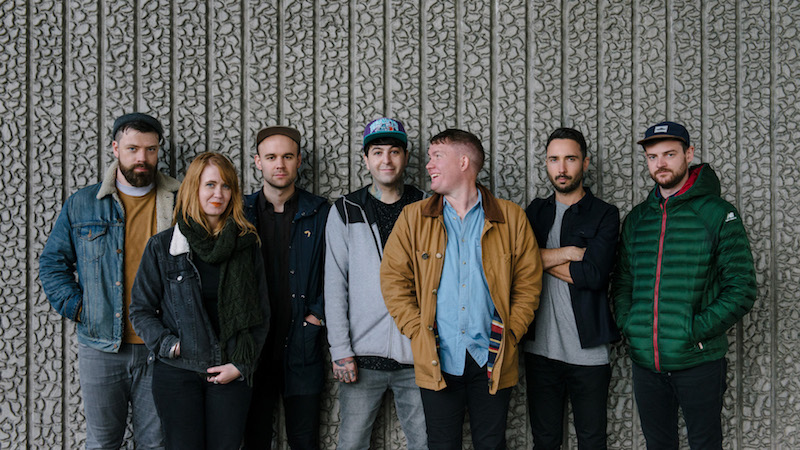 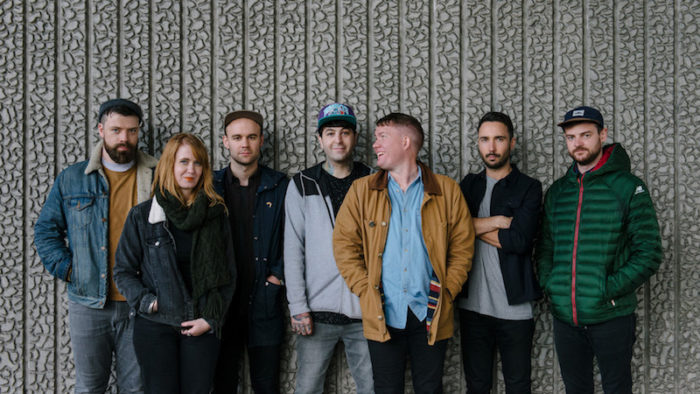 In this day and age, it seems rare that a gig or a tour’s sole purpose would be the entertainment of a given band’s audience. Call me cynical (I am) but physical music sales are on a steady decline, and artists are netting very little from the online streaming platforms replacing them, how else are those bands we know and love expected to keep themselves in Kombucha and vegan-friendly cocaine, if not for merch sales, meet and greet packages and a insidiously steady increase in ticket prices? It’s simple. They’re not. And it’s for that reason, tonight feels all the more special.

Los Campesinos! have always been a band to cater to themselves, and to their fans. Never ones to pander to major label whimsy or managerial bullshittery, the band have instead, for the last ten years, stuck to their guns and their principles; their fans returning the favour with an religious-like zeal. That doesn’t mean to say they’ve not changed over the years, they have, and for the better, but only when the time’s felt right.

And that’s what tonight is about. A celebration of the last ten years of Los Campesinos!; their relationship with their fans, and the relationship their fans have with their music. Oh, and not to mention it’s been ten years since the release of the band’s seminal debut Hold On Now, Youngster and its rapid follow-up We Are Beautiful We Are Doomed.

It’s tracks from those albums, and indeed that era of the band, that make up the first of two sets from Los Campesinos!, who opt not to have a support band and instead spend the first of the evening focusing on early material and rarities. It’s a welcome choice from the band, and a nod to those of us who’ve been with them from the start.

Peppering the set with ‘Drop It Doe Eyes’, ‘We Are All Accelerated Readers’ and their wonderfully twee cover of Pavement’s ‘Frontwards’, none of which have been played live since at least 2010, is a gleeful and nostalgic way to kickstart the proceedings. It’s only really an early inclusion of ‘Death to Los Campesinos!’ that doesn’t come as a surprise. The deliciously pretentious ‘This Is How You Spell “HAHAHA, We Destroyed the Hopes and Dreams of a Generation of Faux-Romantics”’ kicks off a set that’s short, sugar-sweet and nostalgically moreish, reducing more than a few members of the crowd to tears.

A short break and a quick change of tshirts later, and the band bound back on the stage to sound of WHY?’s ‘Exegesis’, before launching quickly in to ‘I Broke Amarante’ from last year’s Sick Scenes. It’s this set that Los Campesinos! really feel to break in to their stride as tracks from across the rest of their catalogue get some much-deserved airings. From the emotional ‘A Heat Rash In the Shape of the Show Me State…’ to the ever-rousing ‘A Sea Is A Good Place To Think of The Future’ it’s an almost transcendental set that the band seem to be enjoying themselves as much as their baying audience.

Closing out the main set with a live debut of ‘Coda: A Burn Scar in the Shape of the Sooner State’ feels like the tip of an emotionally draining, uplifting and joyous evening. And as the band leave the stage to the closing crackle of the aforementioned ‘Coda…’, it’s only a riotous encore that could top the last 90 or so minutes.

We’re not disappointed. Four tracks that epitomise the band almost entirely provide an ecstatic crowd with some final moments of glorious emotional release before we’re left blinking into the house lights. ‘Hello Sadness’ offers the final semi-sombre moment of the evening, before a closing salvo of ‘You Me Dancing!’ and ‘Sweet Dreams, Sweet Cheeks’ sees the crowd lose their collective minds for a final time; the band leaving their instruments behind to join the crowd in a heartfelt and bellowed closing statement “One blink for yes, two blinks for no, sweet dreams, sweet cheeks, we leave alone”.

It’s fitting close for a band who’ve endeared themselves to so many over the last ten years. Whose lyrics have always bridged the gap between over-emotional and tongue in cheek, whose lyrics mean so many different things to so many different people yet can bring a sold out crowd together without any issues and who can celebrate a band who have always been there, and who hopefully will be for another ten years. Viva Los Campesinos!