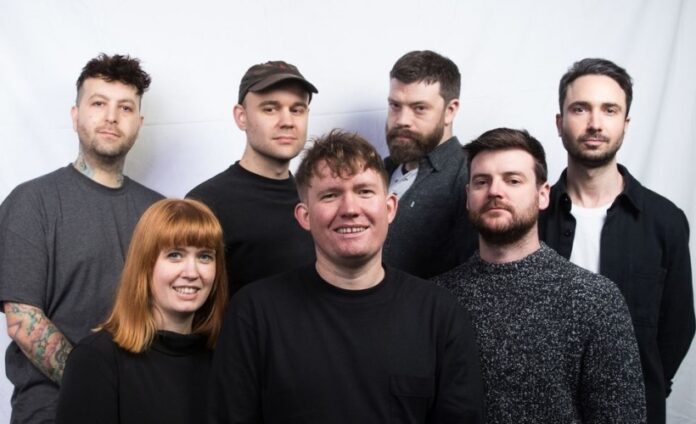 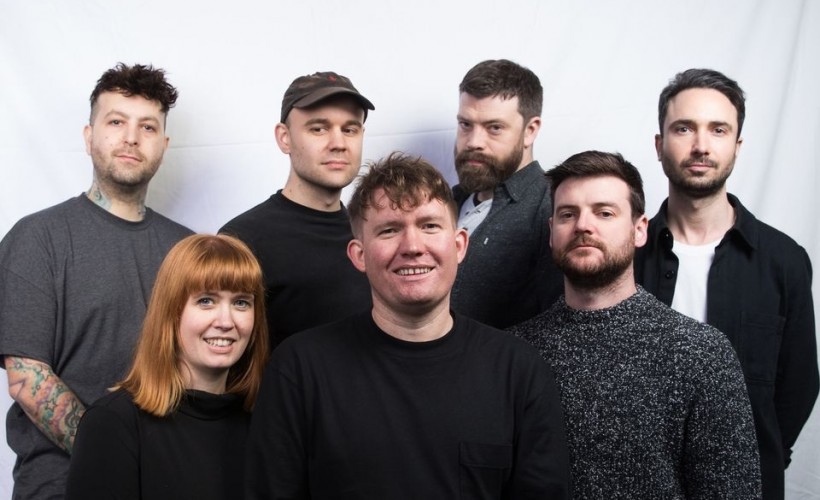 British indie-poppers Los Campesinos! return to Leeds institution The Brudenell Social Club for the third and final night of their current tour. Louder Than War’s Dave Beech was there.

Back in February 2020, I left Islington Assembly Rooms on a high. Having just seen Los Campesinos! play their third album in full. I was elated, optimistic and perhaps most importantly, willfully ignorant of the shit show that was about to envelop the country.

Fast forward exactly 22 months to the day, and the mood of the country is very different to my mood when leaving that London venue. Upon arriving at The Brudenell Social Club tonight, it’s clear that whatever the country might be feeling on a much wider scale, here tonight at least, there’s nothing but love and empathy.

Few bands inspire such emotions in their fans the way Los Campesinos! do, making every show feel like a cathartic celebration, of the band certainly, but also of life in general, its ups, its downs, and everything in between.

Tonight is no exception. Taking to the stage a little after 8:30PM, the band launch immediately into their recent single Allez La Blues a track that seems to embody the bands entire ethos and indeed aesthetic perfectly. From here on we’re provided with a tasting menu of tracks from across the band’s catalogue, with even the earliest albums getting a track or two aired. Naturally, the lion’s share falls to the band’s fourth album, Hello Sadness, the 10th anniversary of which is the reason for this current run of dates.

That said, only a quarter of the set is given over to that record. Elsewhere fan favourites such as Romance Is Boring, Avocado, Baby and We Are Beautiful, We Are Doomed all make expected appearances, as do more recent singles such as I Broke Up Amarante. It’s a testament to the band, that even with such a varied back catalogue, nothing feels out of sorts within their set. Of course, there’s little in the way of deeper cuts on offer, but that matters little in comparison to the sheer joy and elation seen on the faces of everyone across the crowd.

A heartfelt rendition of The Sea Is A Good Place To Think About The Future, is the evening’s only sombre moment, but even then there’s catharsis to be found in 500 people singing back every word, no matter how bleak. It’s followed up quickly by the aforementioned Avocado, Baby, establishing a joyous equilibrium before closing out the main set.

Naturally, to a chorus of “one more song” from a baying crowd, the band return to the stage for a four-song encore, that features a personal favourite in the form of Cemetery Gaits, as well as an ecstatic rendition of You! Me! Dancing! – a definite contender for Happiest Song Ever Written.

Leaving the venue tonight feels very much the same as it did in London 22 months ago. And while the world is undoubtedly a very different place now, it’s reassuring to know that as far as Los Campesinos! gigs go, nothing has changed. They’re still the same safe, inclusive spaces in which people can forget about the world’s bullshit and just enjoy themselves for two hours.

Dave Beech is a music writer based out of Manchester. Links to his work can be found over at his blog, Life’s A Beech, as well as his Louder Than War Author Archive. He also tweets as @Dave__Beech