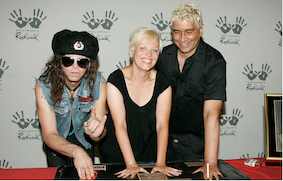 She played bass in the seminal band, The Germs, who formed in 1975 and were fronted by the charismatic Derby Crash whose 1980 suicide ended the band. The band were part of the early LA punk scene who reformed on and 0ff over the years and were last active back in 2013. The band’s final line-up consisted of Doom, drummer Don Bolles and Nirvana Fo Fighter guitarist Pat Smear.

The Germs released one album in 1979, GI, produced by Joan Jett and and were featured the following year in Penelope Spheeris documentary The Decline Of Western Civilisation, which chronicled the Los Angeles punk movement.

Doom’s passing was confirmed by her old Germs bandmate Bolles, who commented on Facebook  that the musician had “left this mortal coil today around 1” after originally posting one word: “Lorna”.