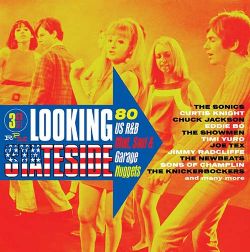 Ian Canty  reviews the fourth compilation from RPM in the “Looking Back” series with 3 discs full of raucous R ‘n’ B, stomping Soul and insane garage Punk from 1960’s America.

Coming in a nice clamshell box with detailed sleeve-notes for each artist featured, it’s clear that the latest entry in this franchise has been put together again with great taste and verve. The general idea seems to be drawing together the relevant pearls of the RPM catalogue, together with other lesser known belters from other Indies. Previous collections have focused on the UK, but were in the company firmly of Uncle Sam here. There are a few bigger names like Joe Tex, the Sonics and the Misunderstood, but in the main most of those present aren’t that familiar to anyone but hardcore fans of each genre, but you mustn’t feel like a blithering idiot if you don’t know any of them, just pin your earholes back and enjoy.

Perusing the booklet it becomes apparent that we are in safe hands with regard to selection, style and design (I notice contributors from “Shindig” are involved and well as other 60s experts). Each disc goes by a general theme: the first featuring the earlier R ’n’ B/Soul crossover days with some oddball instrumentals thrown in, disc 2 “Northern Soul” and the final one Garage and 60s Punkers. Though having said that it’s not a rigid rule and there are a few tracks on each that could easily have finished up on other discs, but nothing feels truly out of place and each CD is well sequenced and pleasingly put together.

Taking each disc separately seems to be the best way to approach writing about it, so…..we will begin with number 1. On the whole it’s very much like what I would have expected to hear at early 60s Mod clubs like the Flamingo or the Scene, though whether that was the case I’ll never know not being born at the time. When Mod was taking off listening tastes tended towards Jazz, but in time R ‘n’ B and early Soul took over and what we have here is the sound of it.

Mickey Lee Lane’s “Hey Sah-Lo-Ney” might be familiar to some through the Detroit Cobras’ version a few years back (as “Hey Sailor”) and Jimmy Gordon’s superb instrumental “Buzzzzzz” predates the garage sound but combines it with some lovely keyboards too – truly ahead of its time in 1963. Curtis Knight (see the Pure Hell review for his 70s Punk Rock adventures) serves up some pure R ‘n’ B with the non-PC “Gotta Have A New Dress” and the Delacardos “I Just Want To Know” is a fine example of broken hearted blues.

It’s odd the Beach Boys never latched onto the oddball Soul/Surf crossover of Zeke Sheppard’s “Snow Surfin” as they had an eye out for every novelty trend at the time and the Locomotions “Make It Saturday Night” recasts “Leavin’ Here” as a scream and holler stomp (the Rationals do a more conventional version on Disc 3).

Any errant Michael Gira fans may be nonplussed by the girl group sound of the Swans “He’s Mine” (yes it is a totally different band) – but its great Spector style unconscious pop. Finishing this platter is session musician aggregation the Music City Swingers’ “Passing Thru Music City” – called rather alarmingly a “Titty Shaker” in the booklet! But it’s a smooth and stylish saxophone dominated number.

Moving on to Disc 2, we’re in the locale of four to the floor Soul jumpers just crying out for the dance floor (I couldn’t stop myself moving throughout listening to this collection and I’m by no means a natural dancer as people who know me will no doubt attest). Highlights here include Timi Yuro’s full bodied and dramatic “Gone” and the Spyders’ heart lifting charmer “I Can Take Care Of Myself”. The tempo slows slightly on Silent Glo’s “Hard Hard Way” and Sonny Stiles and the Kingmen with “Here She Comes” but for the most part it’s pretty fast and frantic stuff. Pride of place for me goes to the final track, the wonderfully smooth and relaxed “Some Kind Of Fever” by Maxine Sellers.

I feel slightly more at home with the “garage” disc as I’ve loved that sort of stuff since buying a Pebbles comp from HMV in the mid-80s, but still there was much to enjoy that I hadn’t heard before. To take the bands I’m more conversant with first, a canny piece of scheduling puts the Sonics directly before their mentors the Wailers (nothing to do with Bob Marley but everything to do with arse-botting frat rock) and the Knickerbockers, of “Lies” fame (imagine if the Beatles were punk) show with the assistance of Jimmy Walker that they had more than one string to their bow with the soul-influenced “As A Matter Of fact”.

We The People provide a clattering bit of Pretty Things-derived bad attitude with “Mirror of Your Mind” and John Peel’s mates the Misunderstood bring things to a slightly psych close to the proceedings. Some might carp at 50s rocker Gene Vincent being featured but he always was a bit punk but never more garage than on “Bird Doggin” – showing he could move with the times easier than a lot of 50s icons.

Of the lesser well-known stuff (to me anyway) Peck’s Bad Boys Proto-Iggy punk snot-fest “Crazy World” and the Brogues kick all kinds of everything out of “Don’t Shoot Me Down”. Lindy Blaskey and the Lavells “You Ain’t Tuff” brims with attitude and the Free-For All’s “Show Me The Way” although more pop and slightly Psych, is still garage if a bit more thoughtful.
These, my friends, are only the mere highlights from the 80s tracks which are mostly of a very high standard and with relatively few duffers. Simply put this is a great entry in a series I hope will continue for some time to come…in the words of the Macho Man Randy Savage “Dig it”!