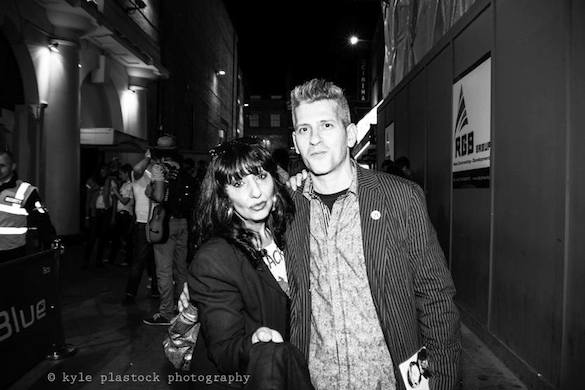 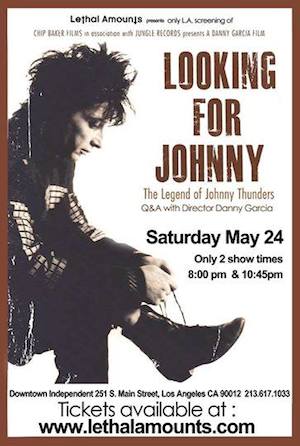 Looking for Johnny: The Legend Of John Thunders

The life of the late New York Dolls and Heartbreakers guitarist and his musical legacy is portrayed in this 90 minute documentary by Danny Garcia (of The Rise & Fall Of The Clash fame), who spent 18 months travelling across the USA and Europe gathering testimonies  from  fifty of Johnny’s friends  to try and capture , what was in the heart of the Heartbreakers’ guitarist.

Together with exclusive and rare footage the film covers the start of Thunders’ career to his tragic death in 1991. Johnny was a legendary hard-living rock’n’roll guitarist who inspired glam metal, punk and influenced a whole bunch of musicians to boot.

So it is no surprise that the audience consisted of seminal artists, a veritable bunch of rock n roll royalty.  Congregated outside the theatre in a  sea of black clothing and spikey hair (or chic hats when the years have taken their toll on the barnet),  are Peter Perrett  and  John Perry  (The Only Ones),  Sex Pistol Glen Matlock , Anita Pallenberg & Patti Palladin , Vic Godard (Subway Sect),  JC Carroll (Members),  Rudeboy star and Clash crew,  Ray Gange , Gary Crowley, Steve Hooker, Honest Jon Plain (The Boys) and  Bermondsey Joyriders.  And also paying homage are Primal Screams Bobby Gillespie, Simone Marie, and couple of Jesus And Mary Chain.  Rarely would you have the opportunity to witness so many influential rockers in one place, let along in the day light – this is not your average premier.

We are given a brief snap shot of Johnny’s upbringing, raised in NY by his Italian mum and sister – the young John Anthony Genzale Jr could have been a pro baseball player. Instead he formed his first band, Actress and his musical career began.

The rock n roll roller coaster ride got into real pace when he joined the New York Dolls. They were an attention grabbing, cross dressing, making up wearing, over the top at everything type of band.  Their fans loved them and matched their outlandish style.  This was radical and shocking for the time. Nowadays, this behaviour seems the blueprint for being in a band.  It certainly got them noticed by other musicians and probably laid a lot.

They were based loosely on the Rolling Stones –Johnny wanted to emulate Keith Richards and his lifestyle.  When those closest to Johnny  attempted to kerb his fondness for drugs, Johnny retorted that Mr Richards seemed to get away it   – it was gently pointed out that Keith was famous before he was a junkie.

The Dolls scored their first UK show as the opening slot for Rod Stewart – it ended with the tragic demise of drummer Billy Murcia and Jerry Nolan quickly joining the band.  The bands close involvement with the UK punk scene is documented with rare footage supplied by Cult filmmakers Bob Gruen and Don Letts, including Malcolm McLaren’s misjudged theme for the band in red leather soviet branding.  Band members, albums, record companies, tours and dealers come and go, by the mid 70’s Johnny and the Heartbreakers replace The Ramones on the Anarchy Tour and record the critically acclaimed LAMF.

Jerry and Johnny’s partnership endured through more ups and downs than a whore’s drawers and is detailed meticulously thanks to Thunders biographer, Nina Antonia.

Garcia does not shy away from the tales of hedonism nor does he exploit them.  The drugs would have been impossible to ignore as it is wrapped in every fibre of the various band incarnations.  Although some facts are still shocking to hear – was Iggy Pop their gateway into smack.  Did the Dolls then encourage the UK punk scene in this direction. Somehow through this haze of indulgence they play on and created an influential body of work.

The testimonials are often touching, amusing but punctuated with sadness.   There are gasps from the audience at the appearance of toothless bassist Billy Rath, the embodiment of partying hard, Television guitarist Richard Lloyd and surviving Doll Sylvain Sylvain.  Troubling on the eye, they bare witness as well as caution to life in the rock n roll fast lane.

Although this is low budget movie, Garcia has crammed a huge amount details into the time frame. Along with the unseen footage, the film is funny, thought provoking and poignant and a must see for all Thunders fans.

Yes, there are notable absences and refreshingly, there is not an array of celebrity talking heads who never met him either.  Those that are present –are the real deal and their stories give great insight to this charismatic man’s life.

Yes, there could have been more chat about the artists that he and the Dolls influenced.  But another bonus is the sounds track – forty songs including a recent tribute single from Bermondsey Joyriders featuring former Oddballs drummer, Chris Musto). And footage from live performances from all periods including his last UK shows in the mid 80’s at London’s Marquee Club.

When Thunders died in New Orleans on April 23rd 1991, the police and media wrote this off as another junkie who checked out. The alleged circumstances are deplorable, Johnny was a sick man, who lay dying whilst all his possessions, money and guitars where stolen and this was never investigated.

This film captured Johnny Thunders’ chaotic life and applauds his creativity. The message is clear; a harsh and sad tale of a talented 38 year old man.  Bob Dylan one said that he wished he had written, You Can’t Put Your Arms around a Memory – so true.

Johnny would have been 62 years old on the 15th July.

UK screenings of Looking For Johnny in September: –

Looking for Johnny: The Legend Of Johnny Thunders is on Facebook.