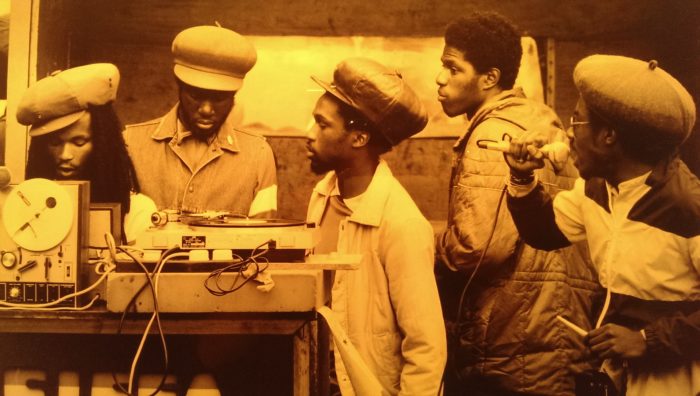 Against a background of cultural and political change the emergence of Jamaica’s sound systems changed music not just on the island but in the US and UK as well.

Carl Stanley takes a look at the history…

Born out a time of change in a country who’s people were beginning to find their own identification comes the amazing story and history of Jamaica’s frontline sound systems.

Rising from the down-town areas of Kingston to the world these pioneers took it to every club, party and music event in the world setting the scene for DJs, MCs and sound systems for ever.

During World War 2 American troops that were posted in Jamaica brought with them the new hip sounds from the states with the energetic jitterbug becoming favourite among Jamaica’s youth, which encouraged some to start up their own big bands playing the many dances that sprang up across the island to its new found audience.

But by 1950 a more cooler/slicker sound was breaking through from the DJs who’d play the new bop-rhythm and blues records, which was again from the States.

Being so close to Jamaica the US was the islander’s main source for all things new and due to the heavy commuting by Jamaicans, to and from the US working in the growing motor industry, the latest ‘hot’ new 78s would be snapped-up and brought back to the island as prize possessions.

It was a constant battle between DJs to find the most recent and ‘baddest’ tunes which some of were played some times more than 10 times in a night by DJs all vying for the crowds to dance to their sets and their records which was the fuel that burnt within the scene – to be heard the loudest with the hottest tunes.

This new way of life mirrored the new found belief and confidence which Independence had brought the people of Jamaica, who’d been worn down from the years of colonial grind by the British. A prosperous era was being anticipated and it was the size and volume of these systems that provided its slick soundtrack, which in turn became central to the whole scene.

The first real big name in Jamaican Sound System history was ‘Tom the Great Sebastian’ (below). Possessing a system that’s hailed as the classic model and influence for many of the systems that came later on. 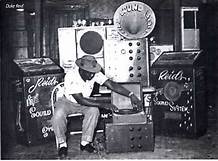 Though there were other systems about with some equally great names like ‘Count Smith the blues blaster’ and ‘Sir Nick the Champ’ it was Tom the Great Sebastian who’s widely seen as some thing of an originator in the history of Jamaica’s sound systems.

Following from the first wave of systems came ‘Duke Reid the Trojan’ who was one of the biggest and baddest characters ever to run a sound system. Named after the Bedford ‘Trojan’ truck he used to load his sounds on the ex-policeman was inclined to let off a pair of revolvers while playing his system and its said that from Reid’s aggressive behaviour the connection between violent gang-land culture and the sound system’s first appeared.

Another of the time was ‘Clement Seymour Dodd’ with his system, ‘the Sir Coxone Downbeat sound system’ which was actually named after the Yorkshire cricketer Coxone.

Dodd’s DJs included former boxer Prince Buster who went on to run his own sound system but not before he came into conflict with Reid one night when the boisterous Reid and 16 of his crew went down to one of Coxone’s parties to ‘tare the place up’.

When Buster caught wind of what was going down while shooting dice round the corner he quickly made his to the party only to have knifes pulled on him and one of Reid’s thugs split his head open with a stone. Bizarrely both Reid and Prince Buster later made up becoming firm friends but it was clashes like these that soon became a stigma of the Sound System parties. There started a common fear of gang battles between the sound system crews among the party goers and music fans.

Styles of ‘toasting’ by the early Sound System selectors would mimic the US radio DJs they’d pick up coming over the water by coming up with their own rhymes and announcements, which took its own form as a clear distinction was being made between the DJs (Mic) and the Selector/Operator (those playing the records).

Two other of Dodd’s main DJs were King Stitt and Machuki who brought the big catchphrase “Brand new- dig, daddy” which contributed to the ‘the Sir Coxone Downbeat sound system’ being one of the most popular of its time. 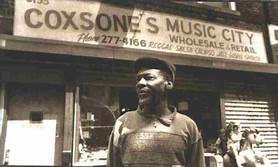 But it was the emergence of rock’n’roll that began to see the favoured R&B releases start to dwindle which greatly affected the progression of these new Jamaican street super stars – which meant only one thing, to start producing their own recordings.

Funnily enough it was Edward Seaga, leader of the JLP (Jamaican Labour Party) who became the country’s Prime Minister in 1962 who actually founded the island’s first label with West Indian Records Limited in the mid-1950s.

Taking local artists and reworking the big hits from the states WIRL’s records were more or less straight rip offs of established chart songs but at this early stage of Jamaica’s record industry the major labels took no notice of these practises as the cuts were primarily for the DJs and sound systems, not radio.

Another notable figure in Jamaican and reggae music was the man who steered Bob Marley’s epic career, Chris Blackwell who came from the family behind the Cross & Blackwell company went into the business in 1959 with Island records which was also one of the first to help establish the Jamaican record industry by releasing one of the islands number hits of 1959 with ‘Boogie in my Bones’ by Luarel Atkins.

But again violence was never too far away and it was the violent and bloody Jamaican elections of ’76 that JLP leader Seaga would use the sound system gangs he’d become connected with through his WIRL company, to fight his political battles on the streets of Jamaica.

In turn many of the main players and sound system scenesters turned into fire power for both the JLP and Manley’s People’s National Party who went to war with each other during the run up to the elections.

By the mid-’70s dance hall would be the sound of the systems and the groove Jamaicans would be plugged into to which also saw the rise in status of the DJ as a live artists in their own rights, who’d learnt to build their sets up and introduce new, slicker ways of playing the records.

Sound Systems in the UK

Though one Sound System DJ/Selector who resisted the trend towards dance hall staying with roots-reggae turned out to be a pretty heavy influence on the British punk bands of the late ’70’s like the Slits and Public Image, was the Jamaican born ‘Jah Shaka’.

Moving from Clarendon to London as a youth he started his trade working for the Soul/R’nB system ‘Freddie Cloudburst’ as sound man- going on to put his own system together in the very early ’70s and by the end of the decade he’d built a sizable and enthusiastic following in and around the capital.

Taking his name from the Zulu leader Shaka he’d play a popular Friday night residency in Hackney at Phoebes Club as well at the Noreik on Severn Sisters Road in Tottenham, and all the time sticking with the sound systems original sounds – blanking the dance hall craze which was felt as moving away from the word of Rastafari, roots reggae and its spiritual content. 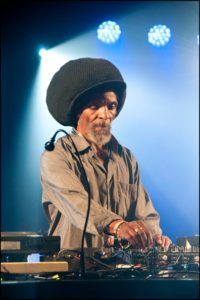 It was this reputation together with his sound system parties that Jah Shaka eventually gained the respect that was due winning many admirers as well as turning out to be a massive influence on the roots reggae sound systems of the ’90s into 2000.

Jah Shaka can be seen in the 1980 British flick ‘Babylon’ playing himself in a clip you could maybe imagine influencing the US Hip-Hop smash hit ‘ 8 mile’, with a similar mood and tension that Eminem’s film carried during the rap-battle scenes it provides one of the highlights from this Jamaican/UK story .

It also stars original Aswad singer Brinsley Forde as Blue and was co-written by Martin Stellman (writer of Quadrophenia) , filmed on the streets of Lewisham and Brixton it sort of plays like other similar British films of the time like Scum or The Clash‘s Rudeboy, just a great film that perfectly depicts sound system culture of the 1970s in the UK.