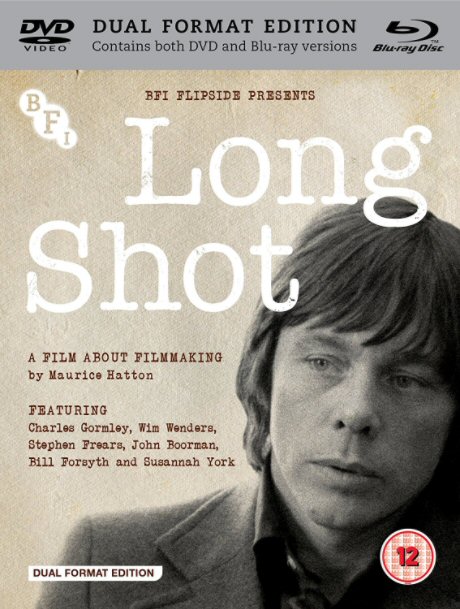 1977 proved to be a key year in British independent music. The Buzzcocks’ Spiral Scratch proving to be the catalyst for what would become a boom period for the D-I-Y ethic. That spring The Desperate Bicycles set out to prove how easy it was to record, release and distribute an entirely independent single, the band even going so far as to provide a run down of every cost involved in the making of the record on the back of its sleeve.

“It was easy, it was cheap, go and do it,” they sang on B-side Handlebars but in the pre-digital era, easy and cheap were not words that anybody would likely use in connection to independent filmmaking.

Mithras Films, the production company behind Long Shot, was certainly far removed from the studio system while the film’s director, Maurice Hatton, was once dubbed ‘the most incorruptibly independent’ of British filmmakers.

Shot on some super grainy film, mainly short-ends and stock that was on the brink of expiring, the film illustrates the struggles of Charlie Gormley (played by Charles Gormley), a producer touting around a script by his pal Neville Smith (played by – you guessed it – Neville Smith). He’s a likeable Glaswegian, passionate but never too in-yer-face when delivering his spiel regarding Gulf and Western, a ‘movie about oil’ set in Aberdeen and he elicits interest from one distributor, who promises to front some money if Gormley can land a name director, preferably Sam Fuller, to helm the film.

Most of Gormley’s time is spent on wild goose chases, desperately trying to track down the veteran American director who is due to make a guest appearance at the Edinburgh International Film Festival; persuading typists to update the screenplay and hustling his script to any exec, agent or possible investor prepared to listen, who will then – if they judge the project has any merit – insist that compromises will have to be made.

I’m not sure how much easier it is to get a feature film made today but at least in the age of mobile phones, Microsoft Word and the internet, the majority of wannabes will at least spend less time being rejected.

Fuller is a no show and in a meeting with Wim Wenders, Gormley brings up the idea of him becoming involved – something which Wenders doesn’t totally rebuff. Later it will be the turn of John Boorman to be courted and he shows genuine interest in working on Gulf and Western, albeit with no guarantees.

In real life, Charlie Gormley co-ran an independent production company, Tree Films, in Glasgow along with Bill Forsyth around this time, the pair earning their money mostly by shooting sponsored documentaries for local tourist boards and large businesses (Forsyth is seen briefly in a cameo where he discusses what I’m guessing is an authentic project that he worked on together with Charlie).

Yes, fact and fiction blur incessantly here – most cinematic luminaries play themselves (or versions of themselves) although a few others are morphed into completely invented characters: Alan Bennett providing a turn as a hapless and hopeless doctor while Stephen Frears is a nameless biscuit salesman whose car is hijacked by Neville and Annie – incidentally, Frears’ debut directorial effort, Gumshoe, had been penned by Smith.

Long Shot is episodic, fading in and out and utilising a plethora of title cards throughout. Shot mostly in black and white (with colour only making an appearance very late on as things finally start looking up for Charlie and Neville) the film, despite its obvious financial limitations, is a fascinating watch and might just be the most insightful fictionalised look at what would later become known as lo-fi or guerrilla filmmaking that I have seen.

The performances are solid and naturalistic with particularly enjoyable turns from both Gormley and Smith – I know I was rooting for their project to be green-lit. It’s also very amusing with some strong farcical comedy and it undoubtedly deserves to be more widely known, having only ever been screened once on British TV, on Channel 4 over thirty years ago.

Luckily after all these years it finally has the opportunity to do so via the British Film Institute and Flipside, a series of DVD/Blu-ray releases dedicated to rediscovering cult British films, previous entries including Bronco Bullfrog and Bill Forsyth’s That Sinking Feeling. Long Shot is a valuable addition to the list.

The extras here are generally very strong, the best of the bunch being Hooray for Holyrood from 1986, an enjoyable and informative look at the first forty years of the Edinburgh International Film Festival (with a couple of brief detours to Cannes) presented by a delightfully caustic Robbie Coltrane.

There’s also Scene Nun, Take One, a short and almost silent comedy directed by Hatton that comes over as a love letter to the French New Wave; Sean Connery’s Edinburgh, a 1982 TV documentary that does exactly what it says on the tin and an enlightening 22 page booklet with new writing by Dylan Cave, Bill Forsyth (whose award winning Local Hero could also be called a movie about oil) and Vic Pratt.

Gormley (in real life) went on to direct several films and TV dramas, the best known being Heavenly Pursuits, which starred Tom Conti and Helen Mirren. Fans of trivia might like to know that his son Tommy has also successfully forged a career in cinema, progressing from a stint as a gofer on some of his dad’s dramas to working with the likes of JJ Abrams as first assistant director on blockbusters like Super 8 and Star Wars: The Force Awakens.

For more information on Long Shot visit the BFI’s site.