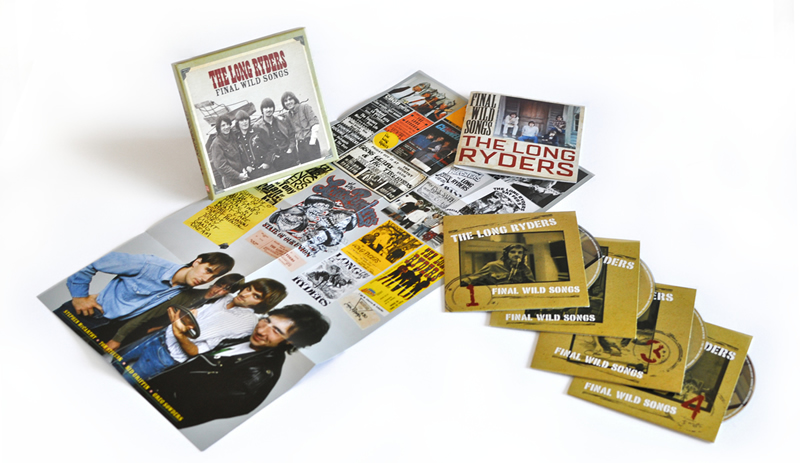 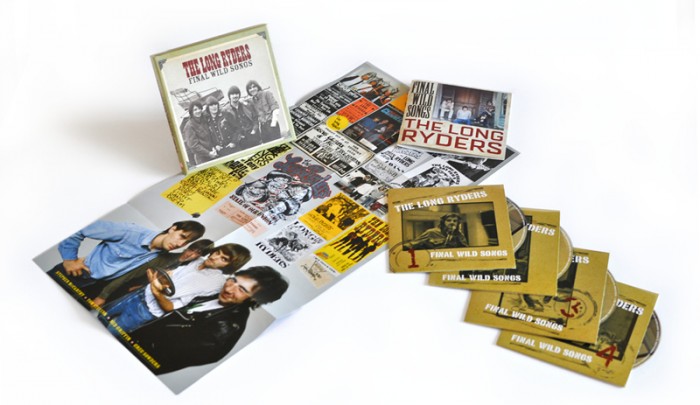 Box set collection that brings together the three studio LPs by the band, with bonus tracks and a fourth CD of a live show form 1985. Ian Canty gets on his horse and drinks his milk.

You could be forgiven thinking from the title that this was an odds and sods assortment from the Long Ryders last years, but it actually is far more wide ranging than that. In fact it brings together all of their albums plus single flipsides and bonus tracks together with live recordings from their halcyon days in 1985 when briefly they were the UK media’s golden boys. The only things missing to me as a non-expert appear to be almost all of the “Metallic B.O.” tape set (which was terrific fun from memory, featuring lots of cover versions and snippets of interviews, though “Blues Theme” from it is included) and the “Live at the BBC” set that was released about 20 years back.

So, all things considered, a fairly thorough career retrospective which begins with the “10-5-60” EP. Though some commentators would have it that the Ryders started off as a rough garage band and germinated into a trad bluegrass outfit with a few rock trimmings, this recording shows that not quite to be the case (the pre-Long Ryders Unclaimed were much more in the garage mode). They had elements of both styles at their inception, though gradually their mid-60s roots would form into a more straightforward rock style, but the country element was always there. There’s few instances already when the geetar pickin’ makes you sense the approach of the Anthill Mob, but it’s not overpowering. The band was in its infancy though and the lyrics, by their own admission, weren’t very good at this point in time. Still they had a good hard rocking sound and plenty of decent tunes to see them through.

This improved with the full album debut of “Native Sons” featuring the “Byrds-with-an-edge” sound that would define their career. Indeed the Byrd that famously wouldn’t fly Gene Clark guested on one track, singing on “Ivory Tower”. Overall it’s a pretty laidback recording – in contrast with most bands, their first full platter was probably the most easy-going. Their link at this point in time with the “Paisley Underground” scene that they emerged from by this time was tenuous at most – they dressed like the Seeds and the Standells, but sounded much more like a country rock act here, like a New Wave Flying Burrito Brothers. With “State Of The Union” they arrived in the UK to a hail of press attention which in the end proved a little counter-productive. I suppose there was an urge from this side of the pond for something with substance and not the style of the preceding “New Pop” years (no-one at the time seemed to think you could combine both). The rootsy sounding Long Ryders looked ready made for the new overtly “rockist” 80s, though a glance under the surface would have revealed more depth than standard flag wavers/foot stompers.

The LP itself concerns itself with the themes of lost love, drinking to forget you were drinking and the hard lives lived by those without any choice. A recording of what would become their anthem “Looking For Lewis And Clark” from the BBC show “Whistle Test” is storming, but the problem inherent in that was looking at the presenters of that series giving them a big thumbs up automatically meant a lot of people would take against the band and their back to basics approach. That programme, despite the revamp, still had the spectre of whispering Bob hanging over it which meant a lot of people would be naturally suspicious of anything championed on it.

Also too much positive press in the inkies can seem like a dream, but as we all know these situations can turn around very quickly and one month’s flavour can easily become the next one’s whipping boy. Such a scene was played out with the Ryders, the final track on disc two documenting this, starting with a derisive sneer by DJ John Peel in answer to a request for the band and consisting of the bad reviews being read out live to a musical backing. It’s at turns bitter, pointless and funny and sums up the quandary the band found themselves in when the tide turned.

A final LP, 1986’s “Two Twisted Tales”, was arguably their definitive document. The lead off track “Gunslinger Man” sounded like a US version of our own Godfathers who were ripping up their own raucous rock n roll mayhem at the time. In the main here is where they got the balance right – not too homespun and with the correct amount of musical hammer. They had honed their sound to the point where it was a stream-lined and harder-hitting version of what had gone before. And with that, they were gone.

But not on this collection where a full live disc from 1985 shows the band on top form, shorn of their “hits”, it helps you realise why they were such a hot live ticket. There are a lot of versions of material that featured on the first few records, but the live treatment suits them, they sound like a band on a mission to play the kind of music that had no truck with the niceties or the shallow dressing up games of the early 80s, but instead relied on raw honesty, whole-hearted playing and above all passion. It finishing with a rocking version of “Tell It To The Judge On Sunday” which shreds the LP version.

It’s a fitting end to a thorough career retrospective of a band that polarised attitudes at the time but stuck to their guns and were very much the real deal as concerned roots rock n roll at a time when so many empty but fashionable chancers were about.

The Long Ryder are back playing live soon on the back of this release look here for details. The Long Ryders can also be found on Facebook and Twitter.