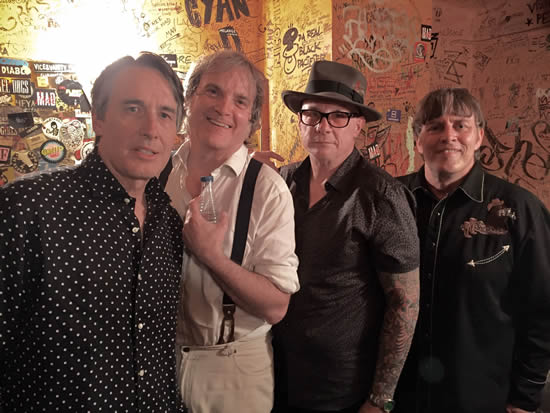 The fathers of alternative country return to London for their first show in the capital in 12 years. A night of classic songs and good vibes. Louder Than War’s Craig Chaligne reviews.

The Long Ryders are heading towards towards the end of their 2016 European tour that will have seen them play 12 shows in the space of 13 days. Starting in Madrid on the 26th of April, the tour will finish this coming Sunday at Dublin ‘s Whelan’s. Opening act for the UK leg of the tour was Sid Griffin’s Coal Porter colleague Neil Bob Herd. Armed only with his electric guitar and a solid  sense of humour, Herd played a short set mixing songs from his EP “Unsolicited Recordings” with Coal Porters tracks.

At 9PM sharp The Long Ryders jumped on stage to rapturous applause from the crowd. First song of the night was the bands ode to horse racing “Run Dusty Run” followed by the melodic “Man Of Misery” sung and written by Stephen McCarthy. It was then Tom Stevens’s turn to take the lead on the moody “A Stitch In Time” followed by a great version of “Gunslinger Man” with Sid Griffin at the mic. Stephen McCarthy proved again and again that he was the band’s secret weapon with some very inspired country picking that would have made Clarence White proud, his solo on the outro of “You Don’t Know What’s Right, You Don’t Know What’s Wrong” was a joy for the ears. “Ivory Tower”, written by the band’s first bass player Barry Shank saw Sid generating some audience participation on the choruses.

Most of the shows of the tour have been sold out and the impression the band gave at Under The Bridge was one of genuine appreciation for the welcome they received after their twelve year absence from the UK . “The Light Gets In The Way” was aired in a very Jayhawks-ish version with some excellent harmonica playing courtesy of Sid. As we were nearing the end of the show, the band stepped up a gear performing some of their most famous tracks. The anthemic cover of NRBQ’s “I Want You Bad” was followed by what is considered the band’s greatest numbers “I Had A Dream”. The instrumental part at the end of the song providing another spine-tingling moment in a gig that had many, why the song wasn’t a massive hit when it was released still remains a complete mystery. Closing off with an urgent version of “Lights of Downtown” and a rocking “State of My Union”, the band then came back for a two song encore that included “Still Get By” and the obligatory “Looking For Lewis and Clark”.

All words by Craig Chaligne. More from Craig can be found at his Author Archive. He tweets at @ChaligneCraig. Photo taken from Sid Griffin’s official website.