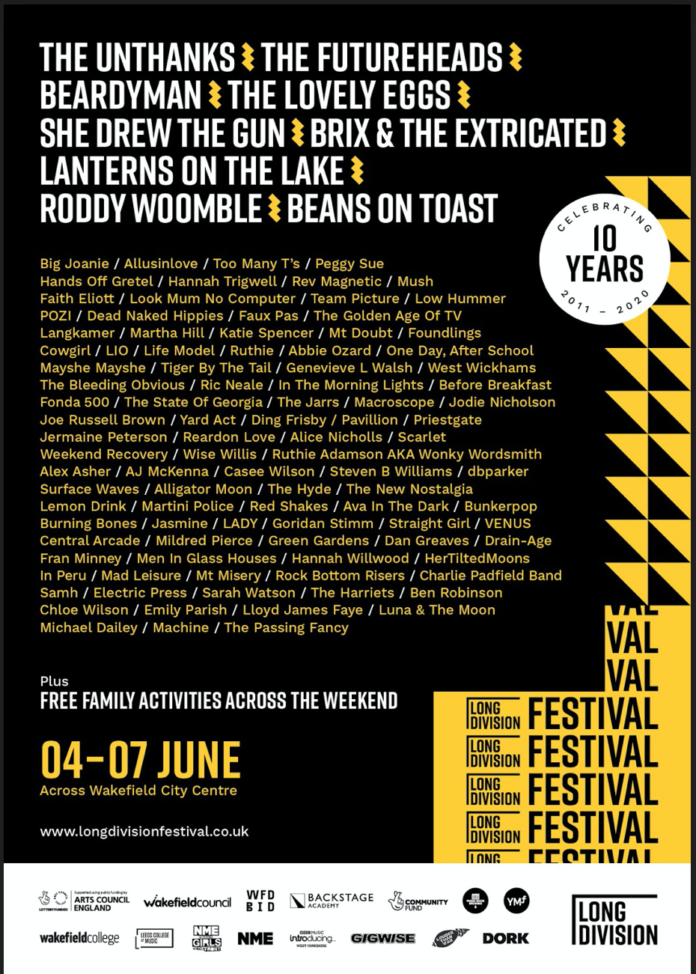 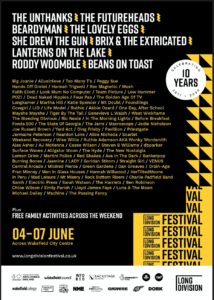 The award-winning Long Division festival has announced the second wave of artists scheduled to perform at this year’s event. Celebrating its 10th anniversary this year, the Wakefield based cultural festival will take over the West Yorkshire city for a four-day celebration of DIY culture, including a massive multi-venue music festival on the 6th June.

Leading this new announcement are critically acclaimed Northumberland band The Unthanks, a boundary pushing folk group who most recently created the much-lauded soundtrack to the BBC revival of Worzel Gummidge. Joining them in Wakefield will be Roddy Woomble, frontman of legendary Scottish indie-rockers Idlewild, and London-duo Peggy Sue, returning this year with their first record since 2014.

Known for their unwavering commitment to championing new acts from West Yorkshire and further afield the festival has also announced some of the most exciting new bands from the area including Mush, Yard Act, Team Picture, and many more. This new wave of acts adds to an already impressive and eclectic bill that includes The Futureheads, Beardyman, The Lovely Eggs, Lanterns On The Lake, She Drew The Gun, Big Joanie, Brix & The Extricated and many more.

Long Division have also announced an exciting new partnership with NME. The legendary publication will be bringing their ‘Girls To The Front’ series to Wakefield, taking over the Warehouse 23 venue on the 6th of June and hosting artists including The Lovely Eggs, Big Joanie, Brix & The Extricated and more.  Other partners contributing their curating skills to the festival include Yorkshire Music Forum, Leeds College of Music, BBC Introducing West Yorkshire and Wakefield College who will be using the festival as a platform to grow and support new talent from the area.

As well as the huge line up on the 6th of June, Long Division has announced an exciting programme of fringe events and other projects taking place this year, including the return of their #YoungTeam programme, the ‘New Additions’ vinyl compilation, the purchase of a ‘City PA’, a free to use PA system to encourage Wakefield based artists and promoters in the city to create their own DIY shows, as well as a collaboration with Yorkshire comic art festival Thought Bubble, an U21’s stage curated by local band Macroscope and a new fringe event ‘Queer Division’ commissioned and organised by local LGBTQ+ artist The Bleeding Obvious.

Before this year’s big event, Long Division will be hosting ‘Long Division: In Conversation’. A new event taking place at The Hepworth Gallery on Friday 20th March featuring two special guests in conversation, including Charlotte Gunn, esteemed music journalist and former editor of The NME as well as journalist and musician John Robb who will both be interviewed by BBC Introducing’s Emily Pilbeam.

Dean Freeman, Long Division: “I see Long Division like this great big mixtape. Some festivals just focus on one thing – and that probably makes some kind of financial sense – but we love all music. We love how it can bring people together, how it can inspire them and how it makes our home city feel special. Walking around Wakefield during Long Division, you will see and hear so much. You’ll find your new favourite band; you’ll catch up with someone great you’ve not seen for a while and you’ll also be to support the grassroots. That’s essential and it’s why we do what we do.”

Hannah Mylrea, NME: “NME are thrilled to be collaborating with Long Division Festival with the Girls to the Front stage at this year’s event. It’s an exciting addition to our GTTF programming (NME’s live shows supporting female and non-binary talent), and we’ve got some really fantastic artists playing. Punters can expect to see everything from punk legends like Brix Smith Start (with her band Brix & the Extricated), to indie folk from Brighton’s Peggy Sue, as well as the chance to discover their new favourite artists with wicked new talent, including Big Joanie and Abbie Ozard.”