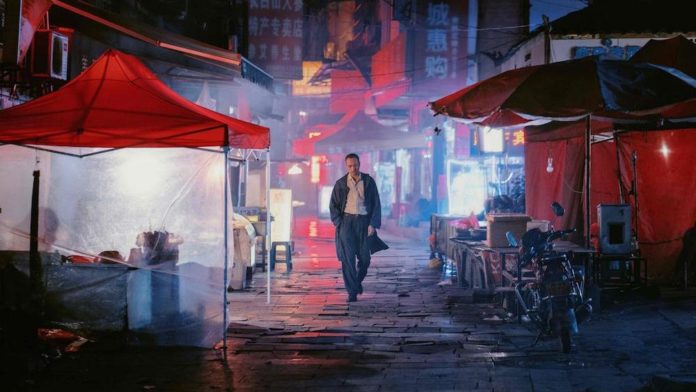 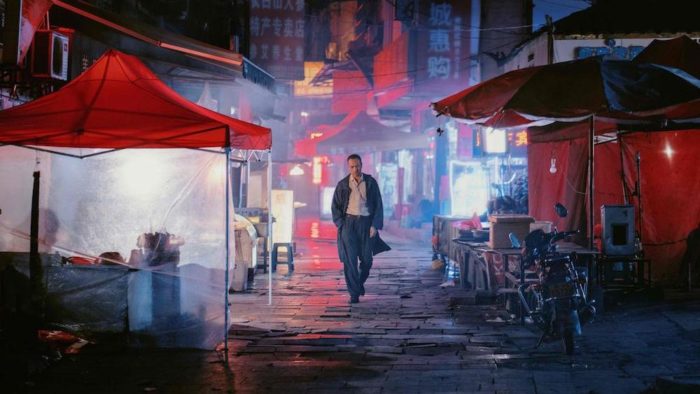 Release Date: Out now at Home, Manchester and on general release

Lee Ashworth sinks into his cinema seat for Bi Gan’s highly regarded meditation on one man’s attempt to reconnect with his former lover, and encounters ghosts of Murakami along the way.

In practice, these ingredients are all present in this much-feted film by Bi Gan, screened in the Un Certain Regard section of Cannes back in 2018.  The saturated colours are undeniable and bring occasional moments of unexpected transcendence, elevating key, intimate scenes such as the pivotal exchange between central characters inside a long, dark canal tunnel and a protracted scene, where the camera lingers intensely on the face of a man eating a whole apple, core and all, as tears stream down his cheeks. The film is undeniably set in China, a China that intersects with the China of my mind too: somewhere between the exotic and the mundane, operating simultaneously in a post-industrial future and a pre-Modern past.  There is also, undeniably, a world-weary anti-hero in the form of Luo Hongwu (Huang Jue), back in his hometown of Kaili for his father’s funeral, soon consumed by his obsession for finding his lost love Wan Qiwen (Tang Wei). The plot is skeletally simple yet obscured by the dreamlike, repeatedly baffling narrative that obfuscates at every opportunity, killing the tension and denying suspense.

In theory, and to some sadly unworkable extent in practise, this film is a cinematic analogue of the literary enterprise of the writer Haruki Murakami – the hallmarks listed above are interchangeable.  The key differences are that Murakami’s literary world is that of a highly stylised Japan and there is an absence of cats in Long Day’s Journey Into Night. As a younger man, I devoured Murakami’s novels and vouch for their brilliance up to Kafka On the Shore. With the exception of his most recent, Killing Commendatore, Murakami’s novels began to feel suddenly, disappointingly formulaic as he began to lean on his own tropes, the nature of events becoming predictable. Yet during my earlier devotion I became aware that to try and communicate the content of Murakami’s work to others always led to woefully inadequate results: reading Murakami was an experience wherein the whole far exceeded the sum of its parts. In a Murakami novel it was hard to say what, if anything, had actually happened or what I’d learned about the human condition, yet every time I read one of his novels I experienced something of true existential import, and something with life-affirming entertainment value.

Trying to describe or explain a Murakami novel is futile for it imparts little of its singularity, weight or effect.  It would be like explaining a fire by listing the dry sticks of kindling, the matches and the logs. It would be reductive. When Murakami wrote his classics he found a way to light that fire, and as great artists do, he made the flames and the heat seem inevitable and effortless – what’s more, the fuel became unrecognisably transformed into a different state altogether.  With Long Day’s Journey Into Night, the reverse is true: what could be a roaring fire has been reduced to kindling, logs and a darkened stove.  All the ingredients are present but the spark never lights. Instead we have hours of interminable trudging through tired, worn-out cliches of worn-out men, who merely smoke through every loosely connected event.

Haung Jue’s performance fails to break through, he is either completely passive or over-animated, his character a composite of lone male clichés, reminiscent of the classic noirish lead or the dusty adventurer thrown back onto his guile and tenacity.  Yet Hongwu does not possess the clarity, the charm or the distinction to merit a place in the pantheon, he is instead derivative of all of them and somewhat outmoded as a protagonist.  But it wouldn’t be the first time: such characters are highly convincing and compelling whatever the era when well-written, yet there are surprisingly few such examples in cinema of this being done well.

Cinematic influence abounds throughout the film. We see references to Bladerunner amongst the rain, the neon and the market stalls of Kaili and also in the cut of Luo Hongwu‘s leather coat in the final sequence. There is also a Felliniesque quality to the way the characters meet in the tunnel, to the way scenes glide by and to the final sequence with its courtyard of performers and audience. Maybe the final sequence, a single take of almost an hour of real-time action, would be more impressive seen in the 3D for which it is intended and discovery of this, post-screening, suggests that elements such as the sudden flight would make me sense.  However, such considerations only serve to consolidate the notion that elements of the film appear disparate and shoehorned in to the narrative for effect and spectacle, with the irony that something much more one dimensional has been projected onto the screen.

For all its promise and for attempting so much that can be possible in cinema that is unshackled from convention, Long Day’s Journey Into Night is a conventional film that remains bound to those very shackles, moored upon the ground, a footnote to a kind of surreal existentialism that still proves illusive on the big screen.

Check out the trailer here: