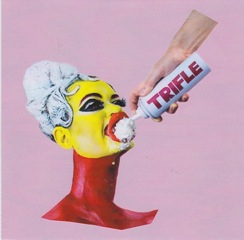 Louder than War’s Ioan Humphreys is blown away by the latest incarnation of performance artist Natalie Sharp.

I’m not completely new to the world of Natalie Sharp aka LONE TAXIDERMIST. Last year I caught her at Supernormal Festival in her guise as Medea. At the time I wrote “Along with Serafina Steer, Natalie Sharp aka Lone Taxidermist and Medea, created a visual spectacle taking in opera, theatrics, minimalist sounds and stage production.  In her vocal gymnastics and theatrics, Natalie’s performance could only be compared to Kate Bush. Unbelievable.”

Fast forward 12 months and the Cumbrian-born, London based Natalie Sharp is releasing her debut album as LONE TAXIDERMIST. As witnessed as Medua and the subsequent irreverent world of LONE TAXIDERMIST, Sharp’s art and expression is firmly based in the ‘performance art’ side of things and her ‘performances’ so far can be equally compared to the afore mentioned Kate Bush, as easily as they could to Gilbert and George or Sarah Lucas. However, what Sharp has done with Trifle, is manage the precarious transition into accessible ‘popular’ music, but without losing any of the ‘high art’ performance or theatrics with it. On the contrary, she manages to drag the latter along kicking and screaming until a beautiful marriage with the former is blessed, sanctified and squirted with healthy amounts of whipped cream.

Along with her co-conspirators Philip Winter (Wrangler/Tuung) and Will Kwerk, Sharp decamped to the splendid isolation of the otherworldly Bodmin Moor studio of Benge to sculpt this ten track opus where they were surrounded by vintage analogue equipment and sci-fi paperbacks.

Opener ‘Home’ has an insanely catchy minimalist beat that just builds and builds with added effects. The vocal delivery is very St Vincent, but with a great wonk to it. A nice noisy guitar solo comes in mid way and Sharp continues to sing about a “throbbing head and the moody blues”. Actually, scrap the lame St Vincent comparison. This sounds completely like nothing I have heard before.

Lead single ‘Knicker Elastic’ is again filled with clever wordplay and more Throbbing Gristle esque minimalist beats. This track really starts to show off the vocal range that Sharp has. What also stands out is the English/British element she brings with her perfect enunciation that adds another layer to the delivery. To continue my lazy comparisons, I’m hearing Kate Bush out on the piss with Siouxsie Sioux. This will do for now.

‘Bjoux Boy’ is another insanely catchy track with a beat and guitar line that just bounces effortlessly and the chorus which stays with you for ages after. A stand out track.

The throbbing electronica of ‘When The Water’s Cold’ and it’s gloriously 80s tinge is sublime. Yet, LONE TAXIDERMIST is no way a plunderer of styles. Just listen to the banshee wails and knowing laugh at the end of the track. There is a humour there, along with the creativity and talent. ‘Dribble Wizard’ is a slow burning experimental track with atmospheric noises and has a real drama and theatrical feel to it. Possibly drawing from the Medua performances, this has an almost operatic feel in its execution. Sublime.

‘Shame’ has another brilliantly infectious percussive beat that runs throughout. A deep throb is introduced and again it bounces around and keep the feet moving. Vocal overdubs and some almost harsh noise create layers and take you to places that you perhaps may not be that comfortable going to? But hey? That’s LONE TAXIDERMIST for you.

The final two tracks ‘Cornflakes’ and the brilliantly titled ‘Hammered In Homebase’ have an experimentation that takes the album to a whole different level. Mixing spoken word intros (Cornflakes) and glitchy beats and electronica, these tracks with their bleeps, blips and Squarepusher esque influences take LONE TAXIDERMIST into realms that i wholeheartedly approve of. It’s schizophrenic but in a good way. She has the ability to craft perfect ‘pop’ records that are accessible to the masses, as well as creating glitchy masterpieces for the few.

‘Trifle’ presents itself as a compendium of tales of debauchery, kinkiness and sploshy naughtiness, yet is it is much much more. LONE TAXIDERMIST is a ferociously talented performer and when placed with the right contributors, has the ability to make pieces of art as original and far reaching as this LP. Great stuff.

For live shows (a spectacle enriched by the murky worlds of sploshing, cake-sitting and crush fetish, and alongside a live A/V onslaught by longtime collaborator and fellow wrongdoer Ross Blake) see their Facebook page https://www.facebook.com/lonetaxidermist/