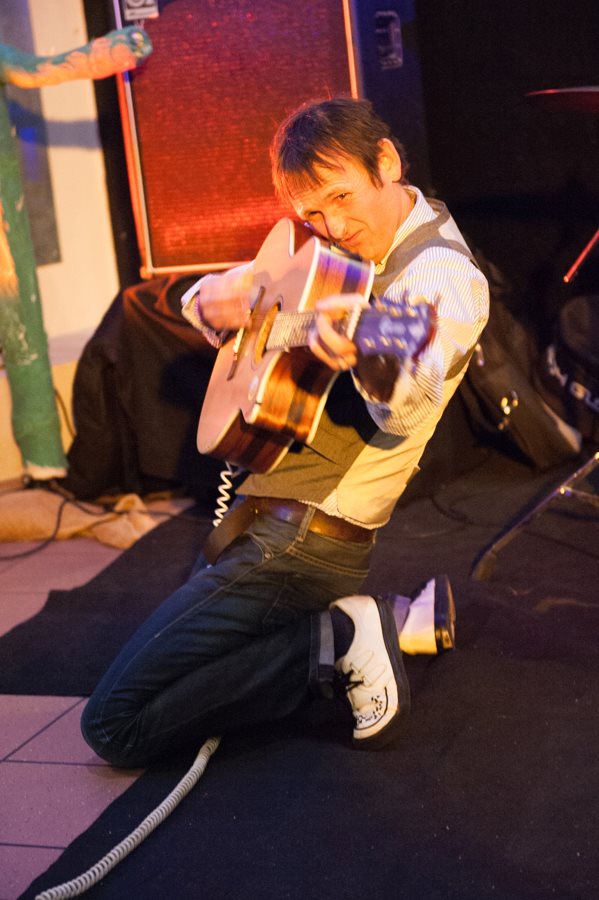 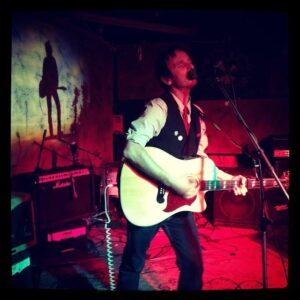 Brian Caulfield aka The Lone Groover  released the album Soundbites and Civil Rights which includes not even his previous great songs but new ones as well.

The Lone Groover (Brian Caulfield – composer, song writer, guitar and harmonica player) released the new album Soundbites and Civil Rights with tracks that we all know so good and also with new amazing songs in it.

The album has The Lone Groover’s unique style with blazing guitar sound which we could see him playing on stage. Songs like The Business, How the West was Lost, Talkin’ Demonstration Blues The Long Groover usually performs are lively and vivid as well as Brian’s great vocal and intelligent lyrics.

‘A song about getting your head kicked in, in under a minute and a half.’ – tells The Lone Groover about song The Business. ‘The brevity of the song matches the boot going in methinks. “Small town, small mind, small everything, I wish I could float like a butterfly with a bee sting”‘.

How the West was Lost – ponderings and observations about living in the 21st century, it’s political with a small P. Though the important line is the repeated romantic one “in a world that’s getting harder to explain, the love of a good woman keeps me sane”.

Talkin’ Demonstration Blues – the song that The Lone Groover usually plays on stage – dedicated to ‘the kids’. ‘A while ago it was popular for certain older political types to assert that the youth of today weren’t as ‘active’ as they had been, but the tories have a knack of bringing the best out of people who oppose them, and the ‘kids’ have demonstrated and remonstrated admirably in the last few years if you ask me.’ – The Lone Groover. ‘The payoff line “educate, agitate, demonstrate” is a simple reworking of the old socialist slogan.’

Songs like Dreams of Strummer, The Refugee, Whatever Happened to the Teddie Boys are very melodic but with a passion in them. Dreams of Strummer – is just brilliant, rhythmic and with such beautiful lyrics. As The Lone Groover says, – ‘An ode to Uncle Joe, based on a visitation I had off of him one night “and he was wearing dark blue jeans, and he offered me a smoke, looking not unlike Jimmy Dean, and he was smiling as he spoke”. 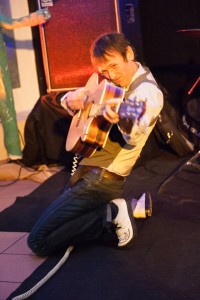 The Refugee song has harmonious chords as well as Whatever Happened to the Teddy Boys. The Lone Groover, – ‘Once upon a time there was a Teddy Boy in every town, and now it seems, they are no more. I always loved their clobber, if not their politics, so it’s a tribute to a long lost British tribe. When I play it live, I tend to dedicate to “anyone who’s ever sported a quiff or a pair of brothel creepers”. My favourite track on the album, the harp and drums courtesy of my compadres, Grae J Wall and Tom Murrow lend it the gravitas it needs.’

Talkin’ Mid-life Senority Blues – which is about getting older but still wanting to go out and create merry hell at the weekend, but also accepting that your day in the sun has been and gone, so “it’s time to pass on the baton, and do it with good grace, our nephews and our nieces, they now occupy that space”.

Peace ‘n’ Luv ‘n’ Haight – ‘An almost optimistic note to end the album on.’, – The Lone Groover. ‘It’s about someone finding modern politics difficult to navigate, when all you want to do, is “do the right thing”, for society, for ecology and for your kids, which ultimately leads to “the hippy mantra, peace ‘n’ luv ‘n’ Haight” with an obvious reference to San Francisco hippydom and Sly Stone. It’s a bona fide hippy ideal but there you go. Admittedly the positive vibe is slightly undermined by the gunshot samples at the end of the track, but Rantin’ Richie’s outro which closes the album talks of “eyes focused firmly on the future”, which hopefully is seen as optimism.’

As well as The Lone Groover is great on stage playing live, such a brilliant his album Soundbites and Civil Rights. All his songs have their own style and it’s always nice to listen to his album if you want to listen to something great.

All words by Sophie Luchinsky. More writing by Author’s Name can be found at her author’s archive.