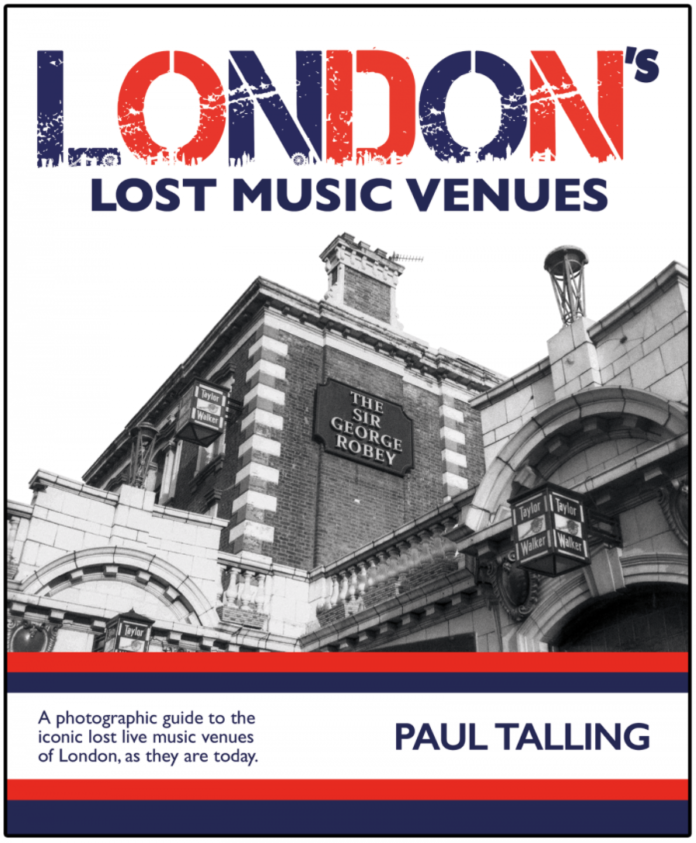 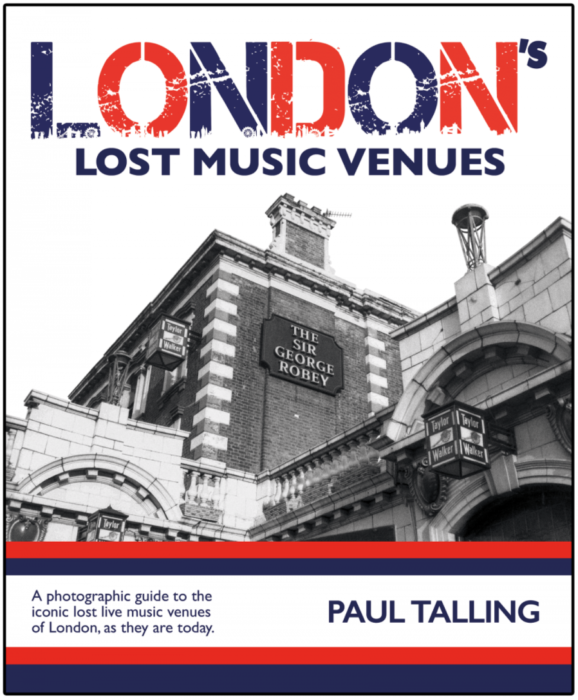 The book is the very first from Damaged Goods Books, the new publishing arm of the indie record label Damaged Goods. You probably know Damaged Goods from its Billy Childish releases over the last few decades, or its most excellent vinyl re-releases from bands like Slaughter and the Dogs, Adam and the Ants, and Buzzcocks.

The book is geographically organised into five categories: Central London, East London, North London, Southeast London, and West & Southwest London. Within each of those geographic sections, the venues appear in alphabetical order. For each venue listed, the book contains a full-colour photo of the venue space in 2019-2020—a contemporary image. For most of the sites listed, the book also contains reproductions of handbills, member cards, coasters, and other ephemera from the gigs referenced in the pages. A few of the venues offer interior photographs. I love the idea behind this book—to provide “an observation of how many live music venues have disappeared,” and “to answer the often asked question of ‘what do those venues look like these days,'” as Talling explains in his introduction. Yet he’s also doing much more. The pages provide brief spatial histories of the sites, along with details of each venue’s most famous gigs.

The book serves as a reminder of all the lives that inanimate spaces have lived, and the ways in which they still contain traces of their pasts. If you’ve quickly passed by the doors of a boutique hotel, an unassuming pub, a trendy restaurant, or a retail store, chances are good that you’ve unknowingly been in the presence of one of London’s great, lost music venues. Most of them, Talling highlights, have lost the visual markers of their past music glory. But just because those buildings don’t reveal their pasts from exterior facades doesn’t mean their histories are lost.

Some of the venue spaces, Talling reveals, even had their own strange histories before they became sites for live music. Hatchetts, a late 1960s venue in Mayfair that featured “DJs . . . on the decks with bands playing every night” above an “under-lit glass dance floor and silver walls” actually dates back to the early 18th century. Indeed, the structure was “originally built in 1703 as Hatchett’s Hotel,” and Charles Dickens referenced it in The Pickwick Papers (1836). Similarly, the first incarnation of The Marquee Club on Oxford Street sprung up in a space originally designed for a 1913 cinema called the Picture House. The Nashville Rooms, with its famed Sex Pistols gig and early shows by Elvis Costello and Wire, started as a pub in 1904. And finally, while its history doesn’t go back as far as some of the other venues, the building that housed The Roxy in Covent Garden began as a wholesale fruit and vegetable market. The Roxy, of course, played a mega role in the UK punk scene. Siouxsie and the Banshees, Buzzcocks, X-Ray Spex, The Adverts, The Damned, The Police, and so many others played gigs there between 1976 and 1978. Today, as Talling woefully divulges, The Roxy has been “occupied by a Speedo swimwear shop.”

Some of the buildings are simply gone, and photographs of the present-day spaces serve as reminders of their absence. The Sudbury location where the Starlite Ballroom once stood, for instance, is a vacant and muddy lot. Its cracked and overgrown sidewalk slate ever-so-slightly outlines the parameters of the once-standing structure.

While there’s much to be admired about the book, I do find myself wishing it contained some physical maps. A few foldout maps for each area of London, for example, could position the venues within their surroundings and suggest walking routes for readers. And although the geographic framework makes good sense, there’s also an argument to be made for a more temporally based organisation of the venues. Given that the book requires an engagement with the fleeting histories of these performance spaces, I’d love to see them collected by era. Perhaps this kind of linkage could occur in a short indexing section in the second edition that Talling promises his readers. I could also imagine a digital companion to the book that provides setlists from some of the lost venues’ most prominent gigs, and possibly some streaming playlists to accompany them. But I’m getting carried away.

Back to what the book does offer. One of the best features of London’s Lost Music Venues is that it urges even the most casual reader to take up an interest in the palimpsestic nature of London’s lost sonic spaces. In its earliest form, the word “palimpsest” described a physical document in which original text was written, erased, and then overwritten. The key feature of the palimpsest is not the act of overwriting, but rather the remaining traces of the original text—the notion that one might gather a sense of what had been erased. The word has since developed meaning far beyond reference to manuscript pages, and it’s often used to describe city structures. Talling’s book reveals how some of the most-loved gig sites in London are palimpsests. They may be lost, yet we might recognize traces of those venues as they once were, marked by the exuberant jazz and punk performances inside.

Walter Benjamin, the German-Jewish writer and philosopher who took his own life in 1940 to escape the Nazi regime, famously wrote, “to live means to leave traces.” London’s Lost Music Venues offers the hope that, even though cultural spaces might be inauspiciously remade or even demolished, we can find traces of their pasts if we seek them out. After all, aren’t we all looking for remnants of authenticity in the mass-market box stores and chains that have overtaken sites where artists from Miles Davis to Joy Division to the Libertines played?

London’s Lost Music Venues is a great starting point for anyone interested in tracing the city’s postwar music history on foot and imagining the gigs the London’s buildings once held. I should also mention that the book is pocket-sized at 152mm x 178mm, making for easy travel on your self-guided walking tour.

You can order the book from Damaged Goods Books.