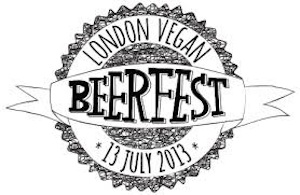 Hundreds set to party at annual vegan beer event. Tickets and information about the event on this link: londonveganbeerfest.co.uk

More than 400 revellers are expected to converge on east London on July 12th, 2014 as London Vegan Beer Fest returns to showcase the best in craft brewing.

Set in the beautiful chapel, hall and grounds of St. Margaret’s House in Bethnal Green, London Vegan Beer Fest is a unique event bringing together vegans and beer aficionados in the name of drinking quality beverages.

“Everyone deserves good beer. The motivation behind the event is to give everyone an opportunity to experience well-made beer in a gorgeous setting on a hot summer day. Bringing together beers manufactured without the aid of animal products means more people have access to this experience.”

Using various animal by-products as a fining agent, which can include gelatine, egg, milk derivatives and fish stomach lining, makes many beers not suitable for vegan consumers. London Vegan Beer Fest attendees are assured that all beers presented at the daylong event are made without the use of animal-derived ingredients.

“A huge number of visitors to the event last year did not identify as vegan, but still had a fantastic time. London Vegan Beer Fest is an inclusive event, welcoming anyone who loves great tasting beer. Many of our participating breweries have won mainstream awards for their beers that just happen to be vegan.”

Participating breweries and companies include Hastings, Brass Castle, Pitfield, Clarkshaws, Asparagasm, Jolly Good Beer and Moncada. Other attractions include performances by local band The Underclouds and Australian duo Love Like Hate. London Vegan Beer Fest 2014 also sees the return of Chari-oke, a unique take on karaoke performed on the lawn raising money for an animal charity.

Demand for London Vegan Beer Fest tickets in 2014 has been overwhelming.

All 250 early bird tickets were snapped up a month out from the event and the remaining general admission tickets are moving swiftly. Tickets can be purchased via the official London Vegan Beer Fest website.