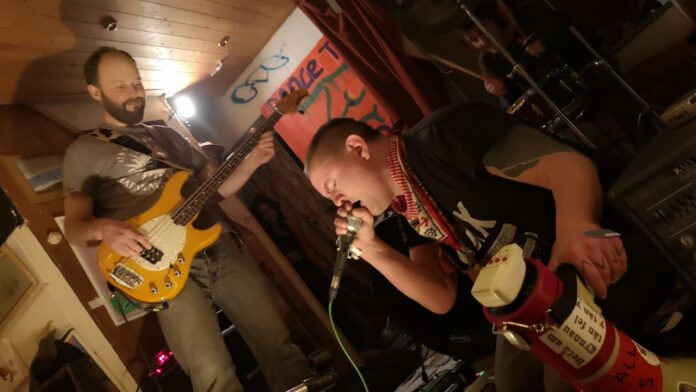 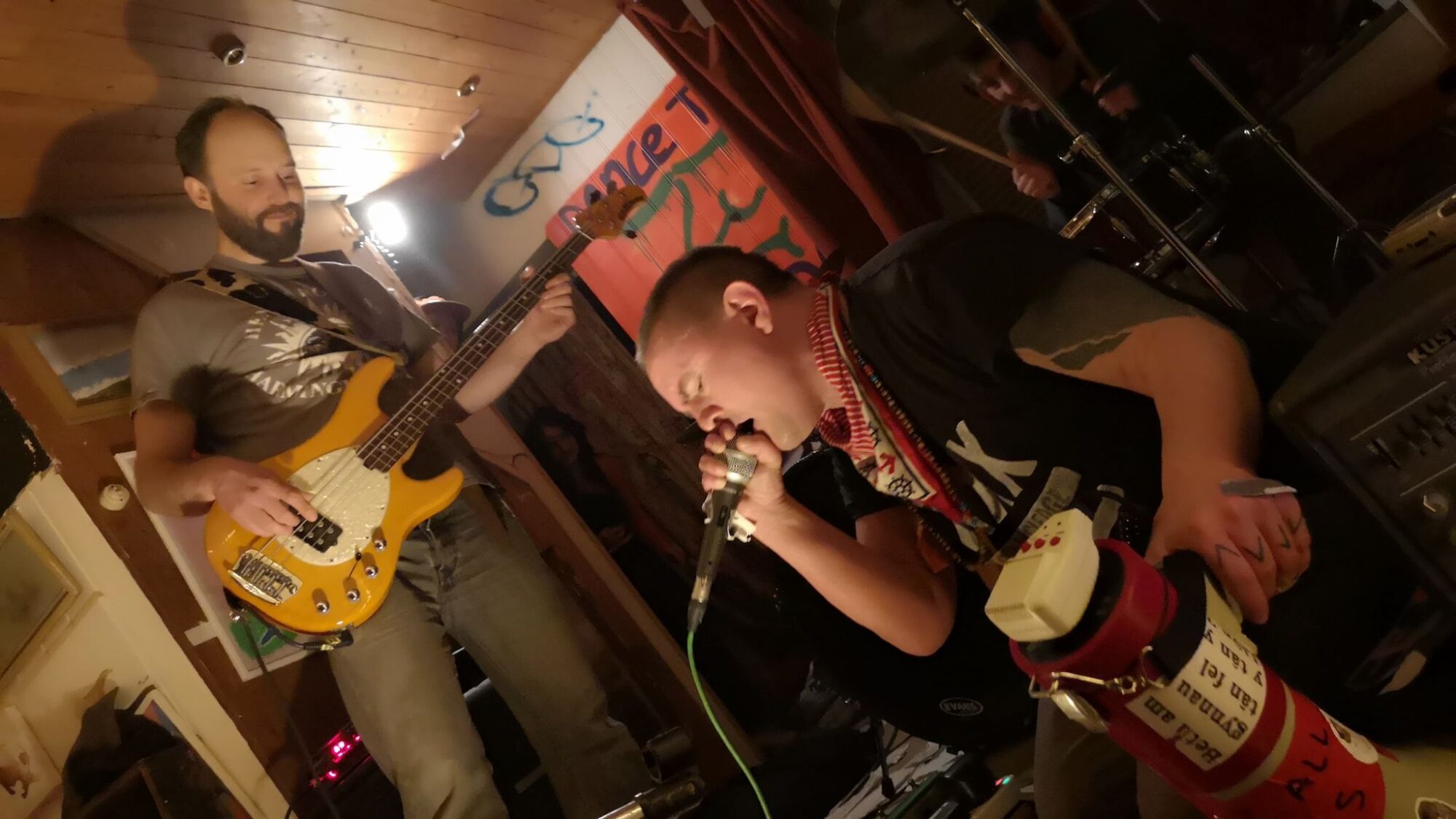 This was a secret – invitation-only gig at a squatted shop in Bangor, North Wales (there are plenty of abandoned shops to choose from). In typical squat fashion, the walls are adorned with hand-painted images and slogans and there are cuttings of words from books strewn all over the floor. That’s evidence that Lolfa Binc are in the building.

It’s cold outside, the smoke inside is heavy, the casualties will be high, it’s only 7pm. Peepholes in the curtains are taped up and the shutters come down over the front door, locking out the High Street. Those inside are now captive, those outside miss out. There’s a police siren and blue lights flashing outside, but it’s due to an incident across the road… We await their departure before the amps are cranked up really high. Hair is let down, wine is swigged from the bottle and people are jostling for position. 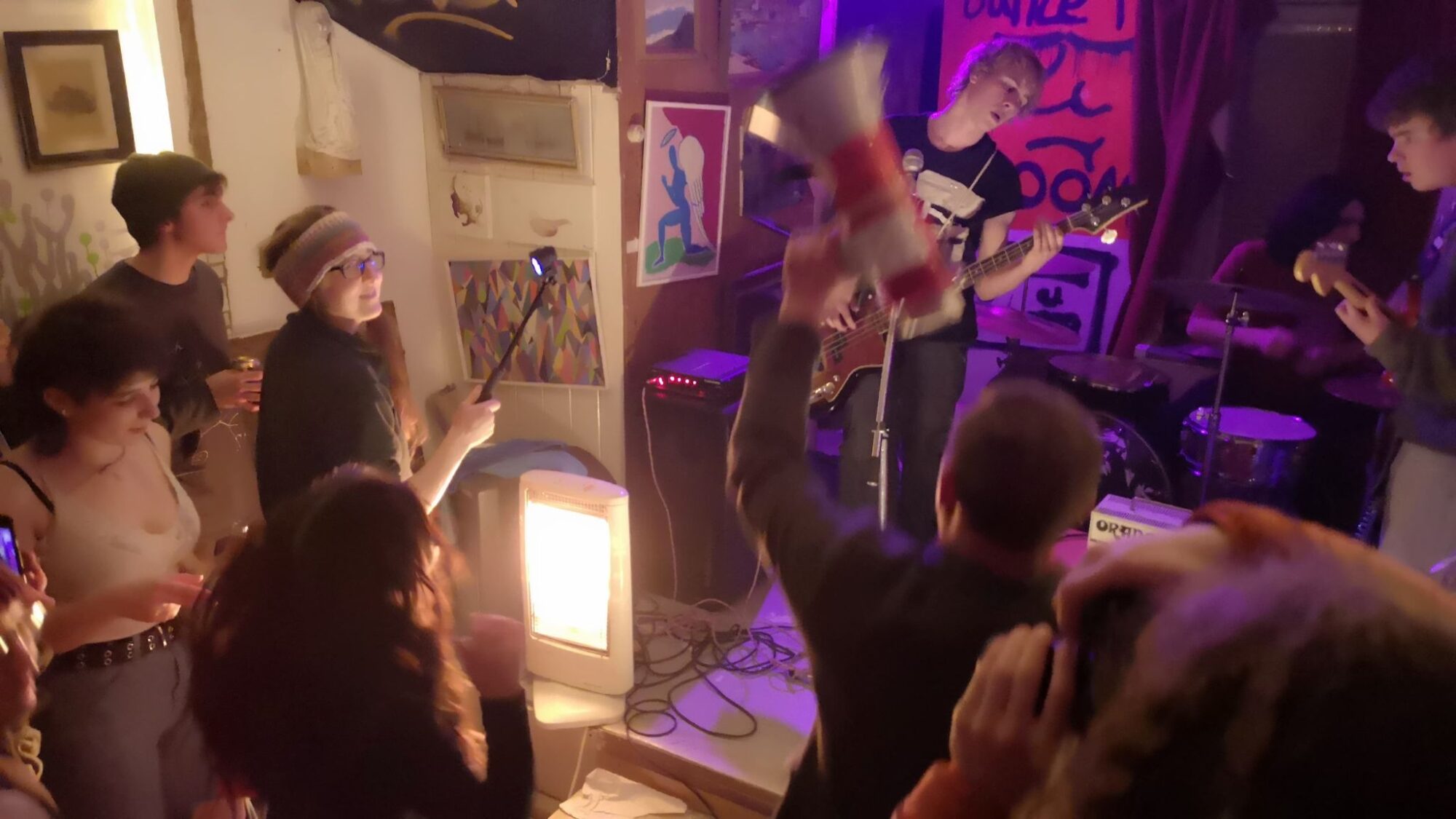 Skrit are criminally young, they were probably bred as an experiment that went horribly wrong and set free in Bethesda. Here they spawned into a nascent punk band called The Skrits; they made a noise for a bit before disappearing into Coviblivion and re-emerging as Skrit. Shouting bassist Barnaby has scraggly bleached hair, a Lydon-esq sneer and a modified Dead Kennedys t-shirt. There’s an almost ‘couldn’t give a toss’ air about them and a ‘76 punk-post-punk sound to the songs (a bit like Eater meets Wire at a Gang Of Four reunion).

The songs are effectively simple like Emily – ‘Emily you’re in my head I wish you’d take me to bed’ and the Welsh language S4C Sponsor Me. Definitely a band to put on the Ones To Watch list.

Lolfa Binc are an entity unto themselves, they exist on a different level, possibly from a skewed dimension. It’s a jam session without any jam, it’s butthole serfdom without a prescription, the mind fries as all unfolds before us.

Their songs have little cohesion, as a fucked-up fuzzed bass bleeds all over tubthumped drums. Tom and Tomos provide this seismic backdrop for Rhys Trimble to get as avant and as garde as he can on your equilibrium. Trimble is on his bardic knees, microphone in one hand, megaphone in the other. He screams some incoherence into one and sets his delay pedal. Some nondescript bilingual slogan echoes over the noise – ad infinitum. This sounds painful; it is, yet it’s compelling pain, it’s warranted, needed and essential.

Songs like the newly released Ebill a Phlyg (Apo)calypso Blues, Cattle Prod, Orange Tape are all available through their Bandcamp page and are a sound to behold. Here in the rotting flesh, Lolfa Binc are on another level altogether. They will send you into uncharted territory, from which you may never return. You have been warned.

Clip from the gig