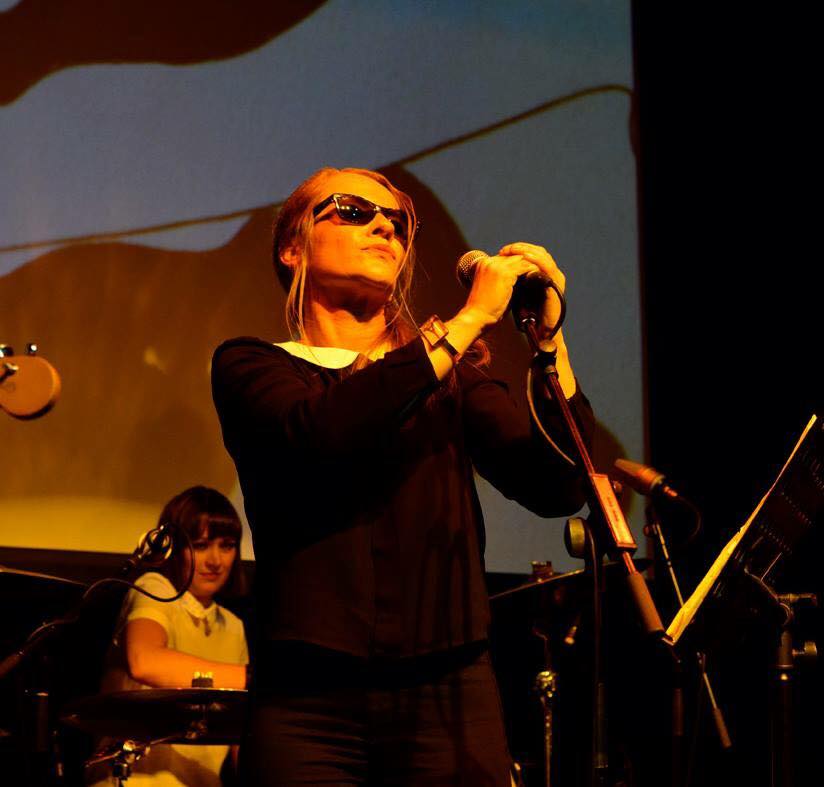 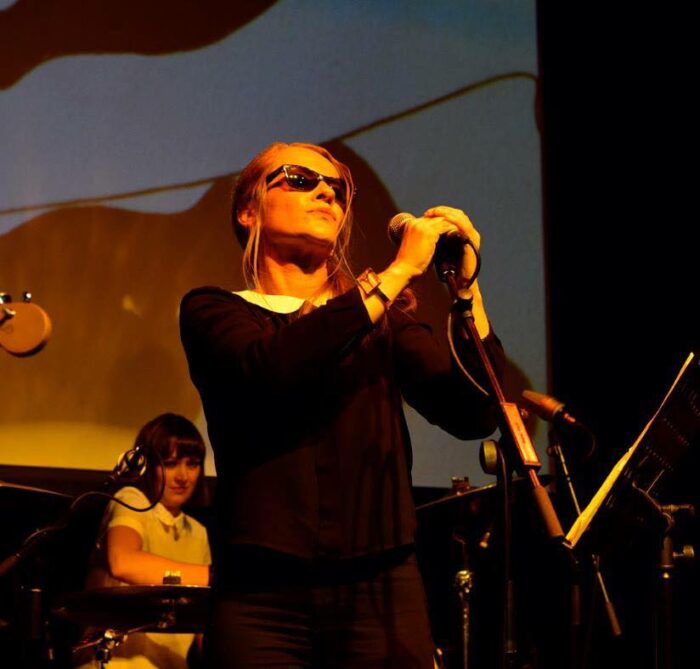 Lola in Slacks with Roy Moller

Launching their debut single ‘Tramlines’, Lola in Slacks emerge fully-formed as the most vital new Scottish band since the Jesus and Mary Chain. Gus Ironside slips on his shades and ventures into their bohemian netherworld.

It would be fair to say that expectations for this concert were rather high.

Since they first started to make an appearance on the Glasgow live scene last year, Lola in Slacks have quickly built a following and established a reputation as an act with considerable potential. All the elements were in place: a charismatic singer with an extraordinary voice, deployed with exquisite taste; a full line-up of top-notch musicians, each bringing their own distinctive musical personality to the mix, and a core song-writing team (singer Lou Reid and guitarist Brian McFie) who have been producing notably high quality material right from the start.

The group’s three track Soundcloud demo made an instant impact and veteran Glasgow music journalist Billy Sloan was quick to pick up on their potential. As well as an interview and live session for Billy’s radio show, Lola in Slacks have been championed by Louder Than War since November 2014. 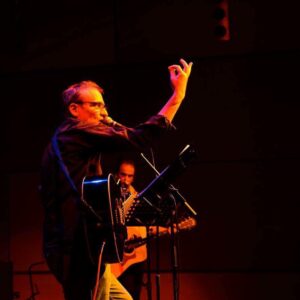 Moller’s set was somewhat reminiscent of Alex Chilton’s raw and dangerous ‘Live in London’ album, or Tav Falco’s classic early shows- a loose, rattling rock & roll jalopy with a solid core of great songs. Literate and dissonant, Moller’s songs  bucked and brayed like Leadbelly or T Model Ford, while the Dunbar-based poet-singer sketched his moving and insightful vignettes of Leith and New York.

One of the highlights was a raucous ‘Captivity’, Moller delivering priceless couplets like “Who comes on tough as a lifer in jail? Who’s got a lover called Rachel (she’s male)?”. Lach took a memorable solo slot with his own  ‘The Edie Effect’ while Stoddart held everything together with aplomb and Paul made a strong impression with his Velvets-inspired guitar-work.

Moller’s songs deserve to be heard in a full band setting so it is to be hoped that the band will go on to play further shows this year. Sterling stuff.

Lola in Slacks opened their set with ‘Bisous du Mistral’, its dramatic Phil Spector ‘Be My Baby’ beat instantly recalling the Jesus and Mary Chain’s finest three minutes. Like the Mary Chain, Lola in Slacks are classicists, consciously part of a lineage that takes in 70s New York, French chanson, and maverick individualists such as John Cale and early Roxy Music.

Right from the start, the sound mix was excellent, the combination of good room acoustics and a skilled sound engineer ensuring that each instrument was heard with precise clarity. A slideshow backdrop featured details from paintings by McFie, further enhancing the sense that this was more of a beatnik ‘happening’ than a conventional concert.

‘Bisous’ is the Glasgow band’s standard set opener and it has blossomed and developed over the last year, the structure taking its final shape and Brian McFie’s perfectly-judged blues licks having been honed to perfection. Typical of Reid’s song-writing, the lyrics allude to deeply personal memories while conjuring irresistibly vivid images which speak to everyone. ‘Bisous’ was a perfectly-formed simulacrum of the show that was to unfold, primed with poetic imagery and riddles trawled from the depths of the collective subconscious.

With a sublimely sequenced set list, every song felt like a new peak. ‘Trocchi’s Canal’ thrilled with its dizzyingly romantic imagery and McFie’s guitar-playing at its most eloquent, while ‘Tramlines’ was indeed the belle of the ball at its own party, the perfect  mix of pop hooks and Noir atmospherics.

Lola in Slacks are a million miles from the cult of amateurism that too often characterises post-punk/indie bands. There are no passengers in this band and every member proved their worth tonight. Lesley McLaren, in particular, was on fire, her drumming a master-class in taste, intelligence and sheer skill, combining the supple dynamics of JD Daugherty with the power and soulfulness of Scott ‘Rock Action’ Asheton. A truly great drummer who combines effortlessly with the perfectly judged bass-playing of Davy Irvin. Together, they make Lola in Slacks swing like Serge Gainsbourg on a booze cruise down the Seine. 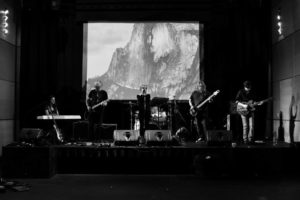 Martin Stuart Taggart was a rock throughout the concert, his rhythm guitar playing releasing McFie to give free rein to his creativity, which tonight included judicious use of feedback and overdrive.  As always, the serene Villy Karagouni supplied the icing on the cake with her elegant piano-playing.

And then there’s Lou Reid.

The petite chanteuse looked in her element tonight, clearly enjoying playing to a full house and content in the knowledge that the band had a clutch of vital new songs in the bag. Reid’s stage presence and vocal prowess define Lola in Slacks; a pocket-sized distillation of iconic torch singers from Piaf to Dietrich, fortified by a triple shot of Berlin Bowie & Pop nightclubbing with Marianne Faithfull.

Reid has a third string to her bow; as a lyricist, there are few who come close. Roy Moller is a kindred spirit in that sense, a sublime poet whose song lyrics are replete with insight and intelligence, but Reid takes a different path, delving deep into her memories and emotions and painting evocative images that unite the deeply personal with the universal in the songs she co-writes with McFie.  The combination of Noir lyrics laden with doomed romance combined with virtuoso musicianship evokes The Only Ones at their peak.

New song ‘Ocean Atlas’ is a case in point; “Unmade beds, little bursts of crime”, Reid sings, “dead neon flickers in the chaos of her eyes.”  The skilful dynamics of McLaren’s drumming again enhanced an already fine song, as the concert reached its emotional focal point, with the stunning ‘Little Vandal’ and ‘Souvenir de Toi’. The three new songs formed a mesmerising triptych which caused jaws to drop all around the room. If Echo & the Bunnymen had ever collaborated with ‘Honi Soit’ era John Cale, perhaps the results might have sounded like ‘Souvenir de Toi’, a looping, spiralling vortex of sound and an instant classic.

It was very clear by this point that Lola in Slacks had made a quantum leap to another level, and the mood was one of celebration as the band- led by a beatific Reid- surged through a joyous cover of Roxy Music’s ‘A Really Good Time’ followed in rapid succession by ‘Nostelgessent’ and a triumphant ‘False Lines’.

Called back for an encore by the rapturous audience, the band dug deep for a surprise airing of ‘Missing Venus’, one of Reid’s earliest songs that brought us full circle.

Lola in Slacks have arrived. This is song-writing at an exceptional level, but don’t take my word for it; buy ‘Tramlines’. Check out their excellent Soundcloud tracks. This is the start of something very special.

Many thanks to Gavin Fraser for his superb photographs.

All words by Gus Ironside, whose Louder Than War author’s archive is here.