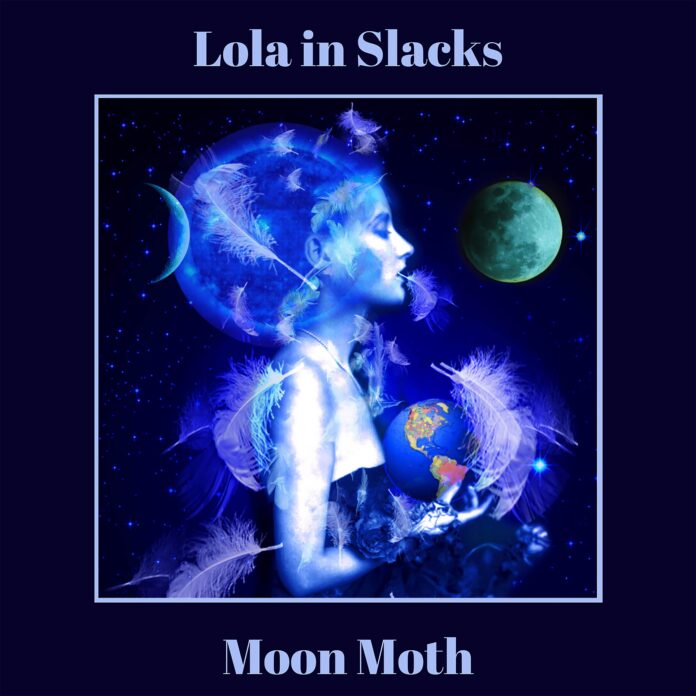 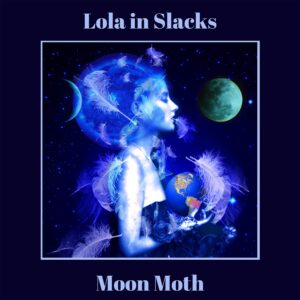 It’s here, at last. Seven years on from the three astonishing demo tracks that piqued much interest in this boldly individual group, Lola in Slacks have finally delivered on the promise of their early singles and stunning live performances with the release of Moon Moth, a perfectly-realised debut album that dazzles with sublime, adventurous songwriting and the gloriously noir atmospherics that the group have made their own.

Having developed her distinctive vocal and performance style playing on the streets and café bars of Paris as a teenager, singer and frontwoman Louise Reid – known somewhat inevitably as Lou to fans and friends – brings a Piaf-like authority to the group’s often bittersweet torch songs. Reid’s affaire de coeur with Scotland’s ancient ally is marbled through the band’s indelible songs, which are co-authored by the singer and guitarist Brian McFie. The line-up is completed by Lesley McLaren (drums), Davy Irvin (bass) and Fiona Shannon (keys).

Moon Moth invites the listener into its own little universe in much the same way that Echo and the Bunnymen’s Ocean Rain or Lou Reed’s Street Hassle do. Opener Postscript in Blue ripples with gorgeous, Mike Garson-style piano, courtesy of Fiona Shannon, while Reid delivers a typically assured vocal performance, as a swooning melody unfolds majestically. It’s a dramatic curtain-raiser on an album that doesn’t disappoint from start to finish.

Ocean Atlas follows, enfolding the listener in waves of Velveteen guitar and Moe Tucker-esque drums, Reid’s lyrics, as intriguing and evocative as always, bringing to mind the street poetics of Iggy Pop during his Raw Power prime as the singer declares, “Dead neon flickers in the chaos of her eyes, the ocean on her shoulders under bright new skies.”  Lola in Slacks may be steeped in 50 shades of noir, but Reid’s lyrics exude warmth and optimism, even – perhaps especially – when she’s describing troubling memories from the past. The famous Oscar Wilde quote, “We are all lying in the gutter, but some of us are staring at the stars” could have been invented for Lola in Slacks.

Brian McFie’s shimmering guitar introduces live favourite Bisous du Mistral, as the band relax into a perfectly measured groove and Reid delivers a heartfelt vocal, declaiming, “Open up this tiny planet, make room for this girl to grow.” One of the three songs from the group’s original demos, Bisous du Mistral remains a vital signature song for the Glasgow group.

Trocchi’s Canal may be one of the oldest songs here, but it’s an absolute triumph, almost a mission statement for this disarmingly romantic group, as Reid references Glasgow’s notorious Beat writer, Alexander Trocchi and the Glasgow Boys artistic scene, while reminiscing longingly about the years she spent as an ambitious young singer-songwriter in Paris.

The prettily melodic Glasshouse follows, before the majestic Tramlines, with its sepia-tinged imagery, leads into the exultant avant-pop of the finale, Strawberry Locks. The album closer surges along with the momentum of The Fall and the garage-pop smarts of early Dandy Warhols, ushering in a whole new element to Lola in Slacks, simultaneously closing the album on a grand high note, while also suggesting new possibilities for the future of this delightfully unique group. In today’s gruelling post-Brexit, post-Covid UK, Lola in Slacks have brought to life a work of great beauty, intelligence and optimism, precious commodities in uncertain times. Embrace them.

All words by Gus Ironside, 2021. See his Louder Than War author archive here.