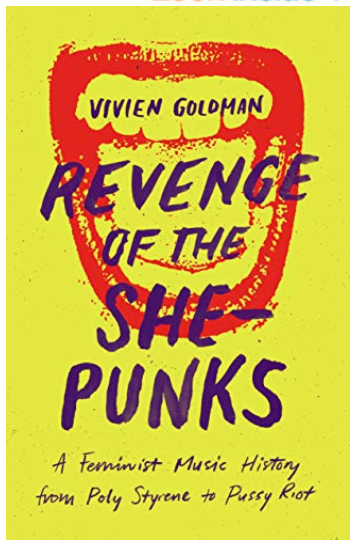 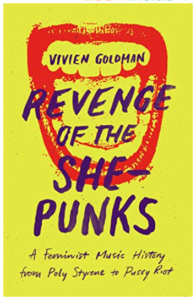 The last couple of years have produced a variety of books celebrating the punk and post-punk scenes, from oral histories and memoirs to photographic records and visual histories. Since we’re all in lockdown, why not revisit a few of the best ones?

At first glance, these three works might seem quite disparate from one another aside from their obvious links to women in punk. Yet upon closer inspection, these texts together speak to the ways in which “she-punks,” to use Vivien Goldman’s words, create an exciting dialogue across genre, space, and time.

Vivien Goldman, Revenge of the She-Punks: A Feminist Music History from Poly Styrene to Pussy Riot (University of Texas Press, 2019).

Vivien Goldman’s Revenge of the She-Punks: A Feminist Music History from Poly Styrene to Pussy Riot was released just about a year ago this month. Published by the University of Texas Press, you might think it provides an academic history of women in punk. Yet the book subverts historiographical norms by offering a history arranged conceptually rather than chronologically. Goldman’s reader doesn’t need a timeline to understand the ways in which women musicians have engaged in meaningful dialogue with one another despite geographic barriers and persistent exclusion from a male-dominated industry. As Goldman illumines, part of crafting a feminist history involves breaking down the boundaries that define what a history looks like. If other histories draw vertical and horizontal connections between people and places, Goldman shows how she-punks are connected by spirals and flashing lightning bolts. The history she creates, she says, is both “an attempt at healing . . . and yes, even, a noncorrosive revenge.”

Goldman’s sources for the book are vast and varied, starting with clips of her own early writings for Sounds, Melody Maker, and NME. She draws on interviews with women who have become synonymous with punk and post-punk in the U.S and the U.K., including Debbie Harry of Blondie and Gina Birch of The Raincoats. Yet Goldman also emphasizes the importance of voices from other moments in time and other parts of the globe, invoking female musicians like Mich Dulce, the co-founder of the Filipina all-girl feminist punk band The Male Gaze, and Tamar-kali, who draws on her family’s deep roots within the Gullah community. Throughout the book, Goldman cites female punk bands from India, China, Indonesia, Jamaica, and Russia—to name a few regions—and places them in conversation with the bands many of us already know so well in the West. As the title of the book intimates, Pussy Riot takes the stage throughout this feminist music history.

Given that the book is organized conceptually, time is a fluid construct throughout the text. Instead of thinking chronologically, Goldman organizes this she-punk history according to four themes: Identity, Money, Love, and Protest. Lyrics from female punk bands’ records become the evidence Goldman uses to support her points, inviting readers to explore those LPs and EPs in greater detail themselves. And I haven’t even gotten to what is, perhaps, my favourite feature of this book: Goldman’s playlists. Each of the sections—four in total—has what Tina Weymouth of the Talking Heads and Tom Tom Club described as “generously curated” tracklists based on the themes. Yes, reader, there are four separate playlists crafted by Goldman, just waiting to be put on a set of mixtapes (or your vessel of choice). 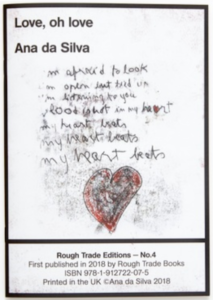 Speaking of Goldman’s third category of “Love,” the next book you should revisit is Ana da Silva’s Love, oh love. If you love The Raincoats as much as I do, or even if you’re interested in the connections between language and visual art, then Love, oh love is for you! This booklet is No. 4 in the Rough Trade Editions series, and it was released just about two years ago. Inside, da Silva’s pencil drawings accompany poems—many are lines from songs recorded by The Raincoats—that lend anthropomorphic qualities to the objects on the pages. A line-drawn apartment building, with red pencil scribbled across its top like fire, screams from one of the pages where lyrics from “Shouting Out Loud” appear: “Shouting out loud/ a woman alone/ a man with fears/ outside at night/ singing alone.” On another page, two ladder-back chairs sit facing one another, at a distance. Lines from The Raincoats song “Only Tonight” appear across the top and bottom of the page: “I saw you/ and then I had to go.”

Each of the pages saliently reveals how da Silva’s hands made these works: text is smudged, the words are markedly handwritten, and pencil lines are blurred, perhaps by the presence of da Silva’s palm moving across the pages. If you’re familiar with da Silva’s visual art, you’ll recognize her trademark style here. Throughout the book, love is at once notably absent as language, yet it’s constant in the great care and distinction with which da Silva creates.

Love, oh love also offers readers an opportunity to recall a much earlier booklet that da Silva created for The Raincoats’ second album Odyshape. In 1981, Rough Trade released The Raincoats Booklet, a 16-page zine that included photographs, drawings, and hand-written lyrics similar to those that appear in Love, oh love. Inside the front cover of that booklet, da Silva wrote the contact address for Rough Trade (137 Blenheim Crescent in London), and a single line above it read: “Designed and Written By: Ana.” There’s a timelessness in the stark connections between The Raincoats Booklet and Love, oh Love, crafted nearly 40 years apart. Indeed, the more recent of the Rough Trade publications offers a chance to engage with da Silva’s creative work in our twenty-first century present while also looking back to the work of The Raincoats in the early 1980s. 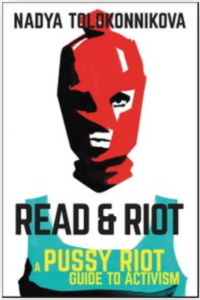 If Goldman’s book is a history and da Silva’s text is an inviting work of visual art, Nadya Tolokonnikova’s Read & Riot: A Pussy Riot Guide to Activism is just what it suggests it is: a guidebook for political engagement as a she-punk. The book contains 10 chapters, and each offers a command to the reader, from broad calls to action like “Do It Yourself” to specific imperatives such as “Make Your Government Shit Its Pants” and “Break Out From Prison.”

For anyone unaware, Tolokonnikova was a founding member of the Russian feminist punk group Pussy Riot. With other members of Pussy Riot, Tolokonnikova performed a punk protest song at the Christ the Savior Cathedral in Moscow in 2012, which they described as a “punk prayer.” For the political protest, the dictatorial Russian state charged Tolokonnikova and Maria Alyokhina, another Pussy Riot member, with criminal offences, and they served newly two years in brutal Russian prison camps.

Read & Riot offers Tolokonnikova’s thoughtful and theoretically charged ideas about what it means to engage critically and politically. For her, such engagement is the essence of punk. As if speaking to Goldman’s chapter on “Identity,” Tolokonnikova writes: “I don’t feel that it is necessary to know exactly what I am.” She goes on to instruct her reader to never try to give a definition of punk. Tolokonnikova explains: “Being a punk is about constantly surprising . . . .  Being a punk means systematically changing the image of yourself, being elusive, sabotaging cultural and political codes. Punk is a method.” If punk is indeed a method, and as Tolokonnikova intimates, a tool to enact political change, the reader can take her instructions to heart: “Undermine, transform, exceed expectations.” Indeed, she says, “that’s what punk means to me.”

All three of these books reveal the ways that reading, thinking, and creating—even from the confines of your home—can make a difference. Ultimately, each suggests in its own way, if you want to make a difference in the world, music can help you do it.