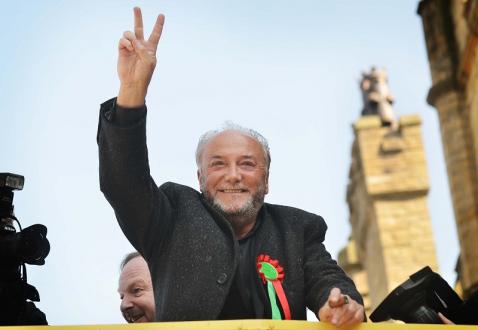 When I was in first year I lived in a shared house with three other students from my course.

There was this one guy in particular who was a constant source of fascination to the rest of us. Alan was intelligent, confident and funny, and also a rabid anti capitalist who made us look like the Bullingdon Club in comparison.

He always seemed to know what he was talking about, and in conversation with us he ripped into his deserving targets (politicians, global corporations, media outlets) on a daily basis, whether we were watching TV or down the pub. We were enthralled.

Lecturers feared him, they really earned their wages when he was in their classes. You could ask him anything about anything and he’d have an opinion on it that was so fiercely and eloquently put that if he’d given us the address of one of his targets after two pints and one of his speeches we’d have set off in that direction with flaming torches.

Alan’s boldness and debating prowess came in particularly handy whenever we had to deal with our internet provider, gas or utility companies. Just by getting on the phone and arguing with these greedy corporations – throwing facts and figures and technicalities at them until they caved – he saved us all some money, and the rest of us time and energy that we couldn’t have mustered in trying to reason with them.

I often wondered why he was so keen to do things like this, how he found the time, and how seemed to be so good at it. I put it down to him being an all-round excellent bloke who prioritised helping his friends out more than whatever else he could have been doing.

The problems started when Alan and Jessica – one of our other housemates – had a disagreement. Alan was a night owl who liked playing music in his room, right next door to Jessica’s room, late into the night. Jessica got a new job, she had to work every morning at 8, and asked him if he could please try to keep it down after 11 so that she could get some sleep.

Alan didn’t take kindly to this restriction on his freedom, and what followed was a turning point for our jovial house.

Jessica became Alan’s newest target. He knew it must be revenge for the time he used the last of the washing powder. As the argument intensified, he questioned her genuine inability to get enough sleep, the acoustics of her room, even her need to work at all considering he thought her parents were disgustingly well-off. He asked her to show him in the tenancy agreement where it said that he had to turn his music down after a certain time – which of course it didn’t. He said she was against him, and that she was a liar. He began to watch her every move and pull her up on anything that he deemed to be less than perfect housemate behaviour, down to leaving a single teaspoon unwashed. He monitored every noise coming from her room at any hour, claiming she was interrupting his random daytime naps any time he heard anything. He left notes on every item in her cupboard in the kitchen, pointing out how every company she had given money to was abusing the planet in various ways. As the only girl in the house most of the time, and not knowing Alan all that well, she felt intimidated by his attention, but telling Alan this only seemed to stoke him even more, because he didn’t believe it. It was a tactic, he said, to get sympathy, because she was wrong.

The rest of us tried to reason with him, to restore harmony to the house or to talk compromise, but once Alan was angry it was no use. He was righteous in his anger, Jessica was the enemy, so her every objection was a smokescreen, and his every retaliation justified. The more we reasoned with him, the more Alan decided there was a conspiracy against him.

Alan began to invite a couple of his friends over regularly, they would crash out in the living room overnight, talking and drinking into the early hours, making too much noise. It felt like a punishment. We asked them to keep it down once, but Alan was ready for us, and roared his indignation, wanting to know exactly what time they would need to leave for it to be classed as coming round for the evening instead of staying over, keeping score of our own visitors and citing an example of one night two months previous when Jessica had left the washing machine on until midnight.

Alan was an expert in bashing out technicality after technicality until it became marginally less stressful to let him have his way than to try to reason with him. Alan was always right, and he could always talk about that at length until we couldn’t disagree.

But somehow, weirdly, this didn’t make the house a nice place to live.

The atmosphere of our once cosy abode deteriorated, we were all loathe to be in the same room as Alan because we could feel the rage coming off him, and all of a sudden I understood why Alan didn’t have anything better to do with his free time than to phone internet providers. For someone whose window was taken up with a massive peace sign, he sure seemed to love fighting with people – but only if they really deserved it (which he insisted they always did).

And now to George Galloway. Plenty has already been written about the events of the Bradford West hustings, and the aftermath. At this ‘political’ debate we saw Labour candidate Naz Shah’s teenage forced marriage brought up by George Galloway as one of his main arguments, with her account of it attacked on a technicality – her exact age at the time. He also bizarrely charged Naz with trying to slander her community by talking about her personal experiences before the hustings at all. George’s spokesman was later quoted saying that if her parents had been at the wedding then it could not have been a forced marriage.

The campaign against her has been painstakingly built – that certificate is all the way from Pakistan, for a start. These well thought-out, gleaming structures of arguments are rock-solid in their own twisted logic, at the same time as being wrong and deeply worrying, and even those who are just as opposed to Labour as Respect are would do well to stand back and look at the bigger picture before deciding that any technicality justifies them.

Many have been quick to defend Naz Shah, equally on technicalities – Naz claims she has the original certificate which shows she was 15 and not 16 when she was forced into marriage, and it has been pointed out by many others that parents are often present at such weddings – but the real issue seems to me to be this: they shouldn’t have to argue this at all.

Someone within the party should have realised that this was not an appropriate point of attack, regardless of whether it has come out in pre-hustings press. The fact that George Galloway felt victorious in ‘exposing’ a detail of a rival’s personal history, whether or not it turns out to be true, was the most unpleasant revelation of all.

And now that Labour have accused him of breaking election law with his comments, George Galloway has countered by claiming that Naz Shah should be charged with perjury over evidence she gave in her mother’s trial. An ‘oops, my bad’ it was not.

We have, in the past, seen George Galloway refuse to apologise over comments about rape that incensed many, rape survivors in Bradford among them. What started out as a defence of Julian Assange escalated into something completely different when George Galloway would not apologise for what was, by anyone’s standards, a massive gaffe.

Just as, in the case of the now famous Thing-gate, a brewery tweeting George Galloway to ask if he’s ‘still a thing’ should not have warranted what followed, and it’s hard to imagine them getting that reaction from any other candidate. Although funny at the time, this very public incident suggests a volatility that should ring alarm bells for Bradford West.

In Bradford West my concerns are two-fold. Firstly: Who else may fall out of favour with Respect in the next five years in Bradford? For what misdemeanors? And then what happens? These are not international disputes, they are local ones, and this binary view in the face of disagreements lacks the kind of empathy and cooperation that Bradford needs to stay on track.

Secondly, with one lone MP in Parliament, Respect is very limited in many ways when it comes to power to change anything. Respect needs more MPs to truly to make a difference in that arena, otherwise it’s just one man shouting at people – even if it is on YouTube, as he has been keen to point out. Getting more MPs is going to require quite a lot of cooperation, without any personal differences ever getting blown so out of proportion that the wheels come off. It requires conversations to be constructive, and not destructive.

All I’m saying, Bradford West, is this: We’ve all got to live together here, we’re not going anywhere, whether we’re Muslim, or women, or even ale enthusiasts. We’ve been getting along just fine for a long time before this, and that’s what makes this city great. George Galloway’s chief superpower seems to be having arguments – but not always at the right time, in the right place, or with the right people. Bearing that in mind, it’s up to us if we want to live with him too.

And before someone accuses me of being a Labour stooge, I’m voting for Celia Hickson of the Green Party, based on policies alone. Plus I get the impression she’d do her share of the washing up and save us some money on the gas bill as well.

Now, back to Alan. We all moved out when our tenancy was up, and moved into a new place without him, where we all got on fine. Alan moved back in with his mum and dad where, far as I know, he has still never been known to be wrong about anything.