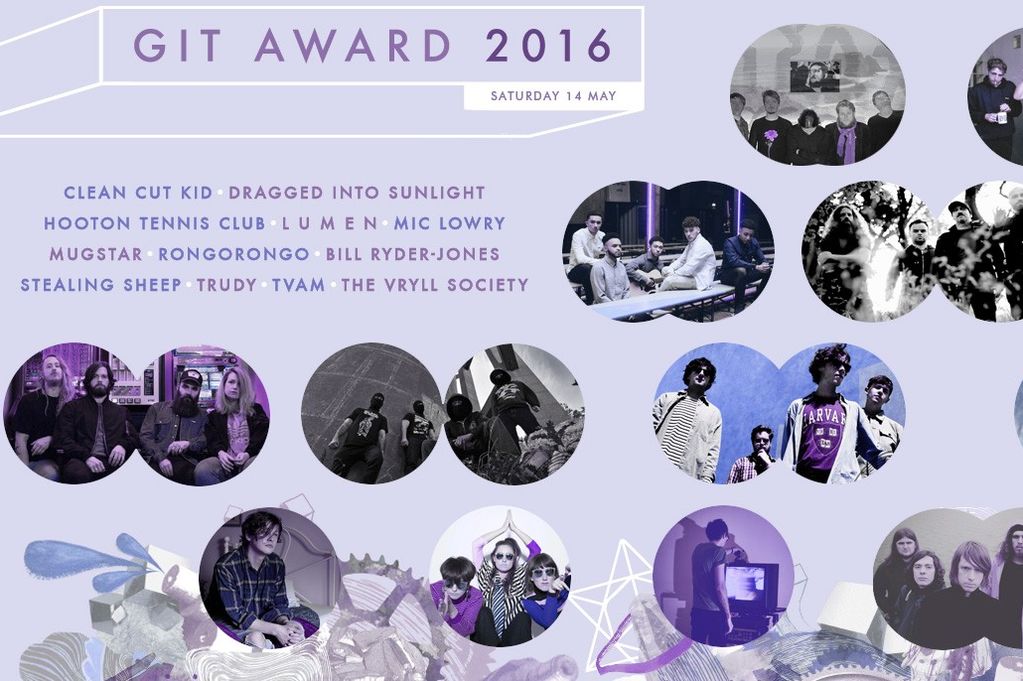 The GIT awards in Liverpool has been focal point in that city’s musical renaissance and a spotlight on the great new music city coming out of the city.
The 12 bands that have been nominated to play at Liverpool’s Baltic Triangle venue Constellations on Saturday May 14th.

We speak to the GIT awards organiser Peter Guy…

1. How important has GIT awards been in the new Liverpool music scene

I think the Award acts as a mirror more than anything; so we’re merely portraying what’s happening on the ground and recognising the artists making it happen on a national or international scale while also helping to give a leg up to those brand new artists who deserve to follow in the footsteps of their contemporaries already achieving that.

2. brief history of the awards

I began the GIT Award in 2011 – having been writing Getintothis – my music blog since 2007 I had seen how much the city was being rejuvenated in the arts and there was a vast swell of boss artists, bands, heads and lunatics making things happen in the city, yet few people outside Liverpool were actually writing or documenting or actually giving a shit about what was happening. I mean, The Kazimier was holding 500+ freakout raves were people dressed up in Elizabethan costumes dancing to whacked out techno and no one but Getintothis was writing about it – and in among all this beautiful chaos were about 50 or more bands and cool mavericks making quite extraordinary music – so I decided to get off my arse and make something which would almost force people to sit up.

I don’t really like the idea of Awards in general as there’s a sense of elitism and commerciality they attract however, there’s hardly any cash involved with the Award, we’ve remained true what it’s about and I think the artists get this, it’s not a big sponsored cooperate affair – I think if it was then people would distance themselves from it, but the artists, venues and people in the music community do overall embrace it. Anyways, it was just a daft idea – hence the name – which grew to having the likes of The Guardian, Vice magazine, 6 Music – even Liverpool Football Club’s head of content – this mad cockney bastard who loves his hip hop – all on the panel. It’s quite ridiculous how it’s grown from an idea in a coffee shop to Yoko Ono asking the winner to support her at the Southbank Centre in London.

Over the years it’s pretty much remained the same; 12 artists one prize. £1000 to the winner – the only real change has been the introduction of the One To Watch Award – we felt Låpsley was incredible but too young having only put out one track and a demo so we kinda invented it for her and lo and behold she went on to sign for XL Recordings after playing her second gig at the GIT Award at the Kazimier and now she’s flying. That story is emblematic of the Award – mad little stories evolving organically.

Everyone enters four tracks, or judges bring potential nominees to the table. This year nearly 300 acts entered while the judges, managers and PRs sent a load more. I write up a shopping list of artists and then we simply work it down to 12.
The maddest thing is, I often think turning round to people like Jeff Barrett at Heavenly Records or Simon Raymonde at Bella Union or say Alan McGee or Tom Ravenscroft – and saying – can you listen to these 300 bands is a bit of a ridiculous proposition – but they virtually always do. It shows that not only do the judges on the home front – like Mike at Liverpool Music Week or Revo at EVOL – listen to all the songs, but also the judges with huge international record labels or working for a big international music company – they find the time and input and always come back with a proper considered list of who they feel should be nominated.

It takes fucking ages I won’t lie – this year we started late, in January, we normally start in November and close judging around February / March – we had seven meetings and hundreds of email exchanges. The thing which surprises me is the amount of annotated notes some judges make too; Robin Murray at Clash magazine and Simon Price (the journalist, who is my favourite Prince fan) both came back with reams of notes. I love it, shows they actually give a shit.

3. who should be looking out for this year

I dunno really the shortlist speaks for itself – but I also think those who aren’t listed shows the strength of new music in Merseyside – there’s the likes of Forest Swords, Ex-Easter Island Head, Outfit, Natalie McCool, Immix Ensemble, John Joseph Brill, Dan Croll, All We Are, Bad Meds, Strange Collective, James Canty, Sex Swing, Tom Low, Dave McCabe, The Coral, Louis Berry, Lapsley, Strange Collective – I could continue – who are all not nominated… The amount of boss new music this city is producing right now is outrageous.

We hosted our launch event back in January at a great new venue called The Buyers Club and featured four completely new acts – Nelson – a shit hot hip hop don who’s charisma is infectious and his bars are staggering. Then there’s the absolutely lunatics OHMNS who basically just make a complete racket which is near the point of collapse but never quite does and finally Pink Kink – this super fucking cool quintet of four overseas lasses studying in Liverpool and this dude on guitar – they’re more fun than any band right now in the city. One to watch for the future for sure.

4. what is the current state of liverpool music scene

In all honesty there’s no scene at such, it’s more like an ambitious, competitive happening which is permanently in flux due to an ever-changing quite hostile and unhelpful environment to support artists flourish – but thank fuck they do, cos they’re persistent and really care. If they didn’t Liverpool could be utterly shite and floundering. The way the city operates right now is purely through passion and lunacy and boss ideas and collaboration; most of the artists in Liverpool have worked together in some capacity – it’s just one big village of cats set out to have a good time. The geography helps and it’s infectious. There’s a real sense of community and fight and imagination. I think Liverpool believe are rightly stereotyped as having a sense of wit but there’s a hunger to better themselves too and that’s what the current crop of musicians have – ambition. Loads of it. Like every city in the country Liverpool fighting venue closures we’ve had various high profile ones but the city is always reacting, and there’s a lot of new plans, particularly on the north docks with the Kazimier crew readying their new playground plus a few other places. It’s more exciting than ever – and I think the musicians reflect that.

5. how have previous winners fared?

Boss. Forest Swords is a revelation in his own right – he’s still I suppose an underground force but he’s soundtracked computer games like Assassin’s Creed, produced Massive Attack, collaborated with Bjork, Lee Scratch Perry and Young Fathers – in my eyes he’s in the UK’s tiop 5 talents, I genuinely rate him that highly. I believe he has new music coming up soon. All We Are absolutely ripped up the festival circuit last year and are currently working on album number two. The first winners of the Award are funny in that they’re almost typical Liverpool in an old school manner – Loved Ones made one of my favourite records to come out the city in years and promptly scrapped it the week after winning then returned to the studio to release it 18 months later and lose all momentum – I kinda like them even more for that – even though I prefer the original version. Baltic Fleet won it the second year; and I’d say they’re the most underrated winner we’ve had – making industrial synth primarily instrumental grooves – their tunes have soundtracked loads of TV and Towers on Blow Up records is incredible – but they’ve not quite broken through to a more established platform despite loads of plays on 6 Music and the like. There’s more new music from them soon. But as I always say I know its fucking cheesy but it’s not necessarily the winner which matters to me, but the rounded 12 as a whole – it’s like fantasy football, it’s gotta work as a collective showing just how strong Merseyside music is – and I feel every year we’ve nailed it. I made the Award cos I want all the artists involved and more importantly, Liverpool and the surrounding region to be firmly on the radar of everyone in music that matters – if the names of these artists and any others in the city are on the lips and in the ears of those who make decisions then we’re doing what I set out to do. Of course some artists don’t need this leg up they’re there already – I’m not daft to think someone like Bill Ryder-Jones or Stealing Sheep aren’t doing it for themselves but we have to remember, outside the music bubble these people may not be known by Joe Bloggs on the street reading his red top newspaper – I believe music is becoming a little bit of a forgotten art and it is being mistreated and neglected by mass media – and it should be cherished – these artists and many many more from Merseyside make music which is truly magnificent – and for that we should be thankful and people should encouraged to listen up. If we play just a small part in that happening then it’s all good.