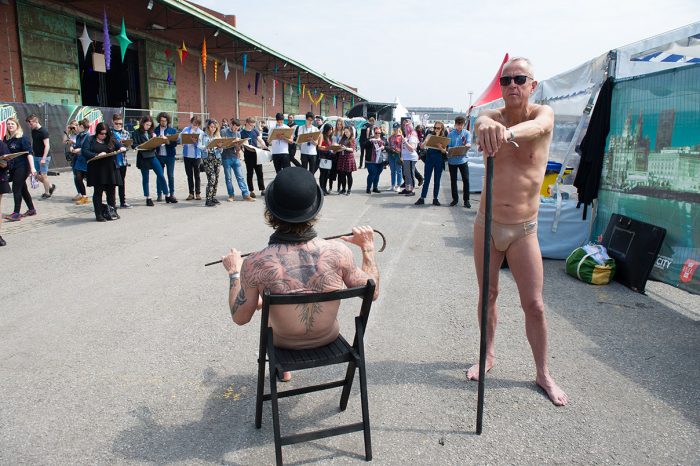 James Lowther (words) and Melanie Smith (photos) headed to Liverpool’s docklands for the two day Sound City 2016 festival. They witnessed a wide variety of ones to watch, plus well known bands, ‘In Conversation’ stage, live art and some great festival food. They report back in both words and photos.

The first thing that struck me about Sound City Festival was the venue itself. Situated on the docks of Liverpool, it was unlike anything I had seen before. The main stage was right on the water’s edge, with another being inside a warehouse – there was even a stage on a pirate ship – named The Tall Ship. 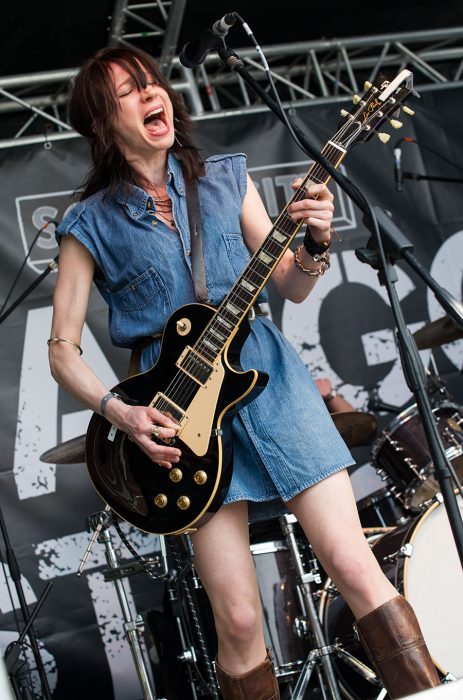 I’d arrived there quite late on the Saturday, but the weather was gorgeous and I was looking forward to a day filled with the finest music that the festival had to offer. Suzie Stapleton was an act that I had been looking forward to, (but sadly missed) but Mel informed me that she played an excellent set on the Cargo stage,  sounding like a cross between Chrissie Hynde and Melissa Etheridge. and is definitely one to watch out for in the future. She was performing for the very first time with her new band, who consist of  Gavin Jay (Jim Jones Revue) and drummer Ian White (Gallon Drunk).

I kicked things off on the main stage with Band of Skulls, hot off the release of their latest album ‘By Default’. The southern rockers played a blistering set in the sunshine, laden with hits like ‘Light of the Morning’ and ‘Death by Diamonds and Pearls’ – though there was a distinct lack of material from ‘Sweet Sour’. 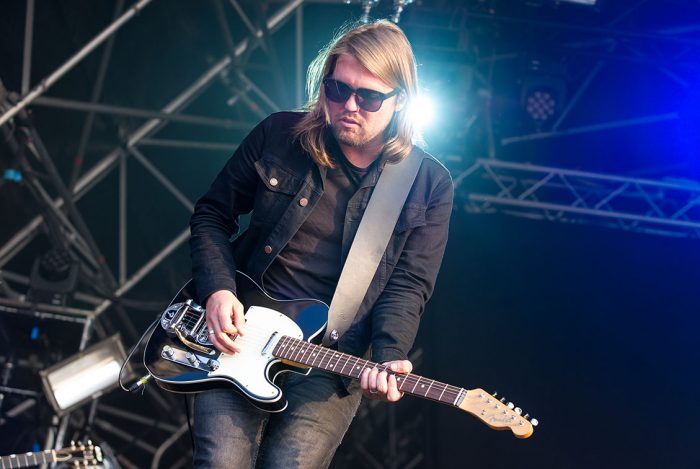 The pirate ship intrigued me, so I checked out one of the bands there, too. The stage was tiny, but the young French band Las Aves, really impressed me. Synthy electronic music a la Chvrches seemed a little out of place on an old boat, but they sounded great. My only issue – and this seemed to be an issue festival wide – was that there was an awful lot of sound bleed between the stages. All the stages were very close together, and if you stood in the middle of the site you could hear music from all directions. A bit of a shame, but it didn’t dampen my spirits!

Mel was busy shooting all day around the festival capturing the likes of Storme, Youth Hostel, False Advertising, Castles, Norma Jean Martine, Julia Jacklin, Judas, Sugarmen, Shrinking Minds, Wake Islands collaboration with Feral Love and the exotic dancing from Brazillica, which gathered around the centre of the festival for some interaction with the crowd.

A crowd formed for award winning director/ musician and actor Paddy Considine as he was being interviewed by Dave Haslam over in Tim Peaks Diner, in which he gave an honest, amusing and interesting conversation. Afterwards he performed with his band Riding The Low, but sadly we missed them. 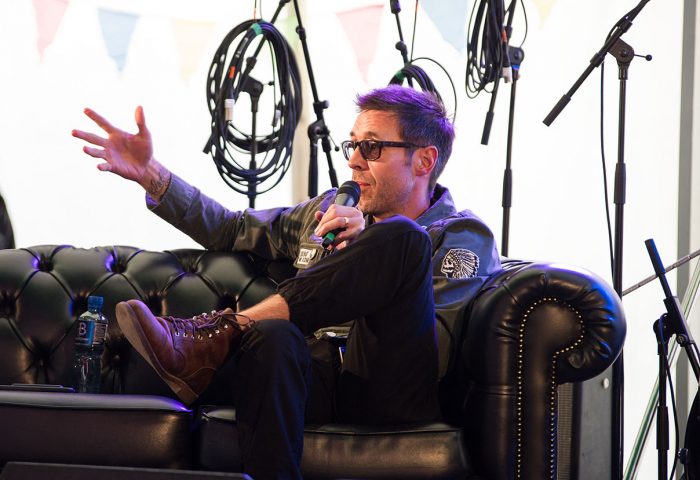 One of the acts I was most looking forward to over the weekend was Sleaford Mods, and they didn’t disappoint. Fresh from their humorous ‘In Conversation’ with Dave Haslam in Tim Peaks Diner they appeared on the main Atlantic stage. I don’t really think the crowd had quite prepared themselves for the set (most of them were just waiting around for Catfish, I’d imagine) and were a little taken aback by the Nottingham duo’s ranty electronic stylings, but I had a great time. 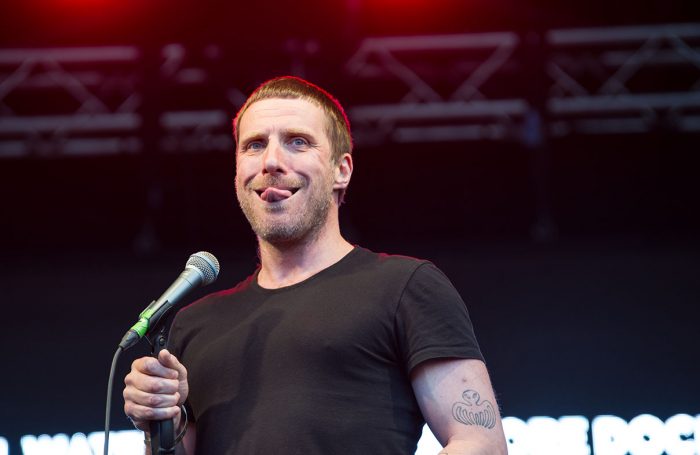 And then it was time for the headliners. Catfish and the Bottlemen are a band that have pretty much passed me by, and I was surprised at them taking the top spots at a few festivals over the summer. Their indie swagger reminded me of early Libertines and Arctics, but I couldn’t help but feel they hadn’t quite carved out their identity yet. I watched a fair bit of their set, including the pretty great ‘Kathleen’, but I have to say I was a little underwhelmed. The crowd loved them though, and I wish them well in the future. 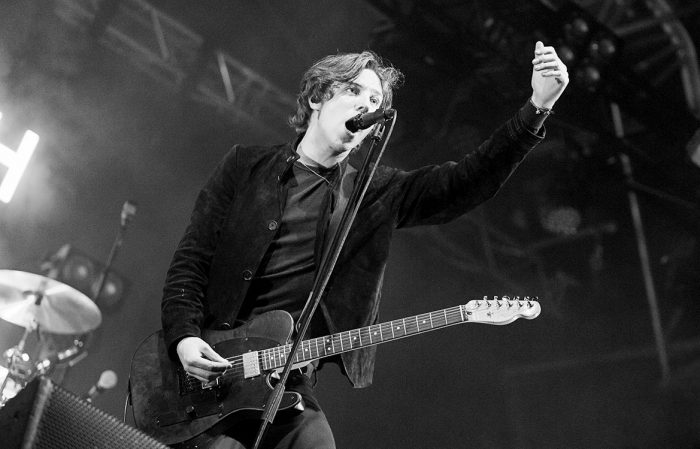 Our roving photographer Mel flew over to the North stage for Young Fathers, then took the bull by the horns and took her life in her hands to photograph the exciting raucous performance by Manchester’s own hotly tipped Cabbage as they shredded Tim Peaks diner. I left the festival with sore feet (the dock was a bit rockier than other festivals I’d been to!) eager for another day in the Liverpudlian sunshine. You can catch up with day two here: 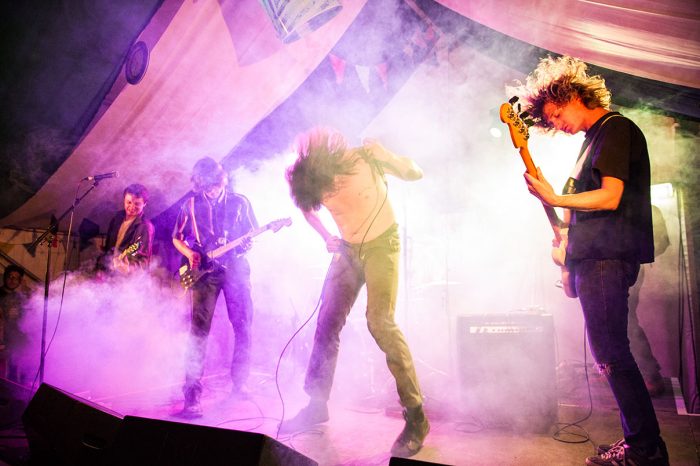