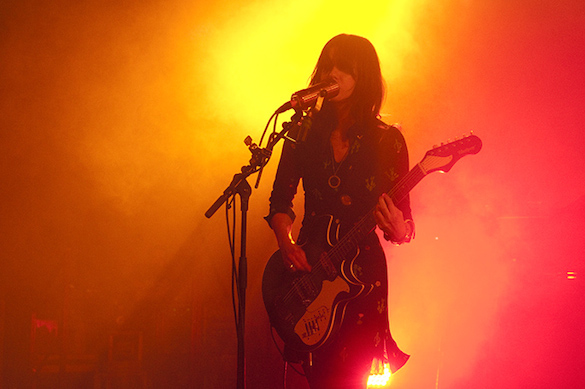 Our man Keith Goldhanger is at Liverpool’s ever brilliant Sound City for us at the moment. With a bunch of bands seemingly culled his personal list of current faves, not to mention ours, he’s not unlike a pig in muck. Below is how his day one unfolded – stay tuned for day two.

Fly posters – We don’t get them in the capital anymore and reading them is a welcome pastime reintroduced to our lives for a short while as we wander the streets of Liverpool a day early, standing to read what’s going on in town. This is better than the Internet, it gets you out in the evenings and occasionally the obnoxious grafitti can be shocking, as well as giving the general public additional entertainment.

If watching a busker in the shopping precinct on a Wednesday afternoon and realising how good he is and guessing correctly that the fellow is in a band, then opening brownie points are awarded immediately, with bonus points given guessing the guys name. The brownie points are swiftly all taken away when the name of the band is incorrect. So it wasn’t Luke from the Kooks but Luke from THE SUGARMEN who we’ve now added to the list of bands to see that is already overflowing.

There’s a criteria that has been set in regards to which bands yours truly will watch on day one of Sound City.

I must have liked your tune when I stayed in last Tuesday.

You need to have employed my mate Jim to drive your van.

You must have represented your country in the only Eurovision song contest I have attended and you have to be called the Fat White Family.

If you’re also bold enough to approach the most dodgy looking fellow having a quiet pint at lunch time and demand that you should go to see their band, that also does the trick.

Anyway… SUN MACHINE sounded good on YouTube and their early set was not disappointing. A bit of a psych version of Kasabian really. Debut single ”Have You Seen It, It’s Alive” is worth checking out if you’re unfamiliar.

A few ooh’s and a couple of aaaahs got the pulse racing, as did a very short glimpse of Israeli pop combo SKYROADS, who would have been more suited to a late night slot as opposed to the early stage time given.

MUMIY TROLL are from Russia and main man Ilya Lagutenko has been to the school of Billy Idol and the plastic surgeon of Elton John. He’s a massive superstar around the world apparently but a middle aged man in a long tassled skirt, in a car park … er, hold on a minute … this is that bloke from Eurovision 2001 … HOLD THE FRONT PAGE !!!- this was fab, honest.

Another festival where the venues are mere seconds away means we get a glimpse of five piece SEA MONSTER EYES and a couple of tunes by the IC1’s who together offer nothing new to our ears, but we cannot deny that there’s a big world out there that will love this stuff.

CRYSTAL BATS 80s inspired simple pop dittys are a joy to behold. They seem to employ as many sounds from that decade into each song and we’re sure that at a later time, in a bigger venue, this would keep everyone happy for half an hour.

God damn, GOD DAMN are great. They have songs with lots of little quiet bits in them, loud bits and REALLY FUCKING LOUD bits that come at your head like a couple of speeding juggernaught lorries with failed breaks and the stereo stuck on LOUD ! This duo don’t do nice and soft, it’s all pounding drums, shouting voices and ace, loud in your face guitar.

Brilliant set that sees the drummer’s stool at least ten feet lower down than when he began hitting the living daylights out of them – top stuff.

We’re here really to guarantee a place for the FAT WHITE FAMILY … you know … the best band in this country at the moment, a band even better than the Sleaford Mods as not only I say over and over on a daily basis at the moment, but it’s also what other people seem to be saying to me at random intervals. THE AMAZING SNAKEHEADS are a bit like the FWF. Except cleaner, a bit more polished, a bit more conventional. It’s the chaos that surrounds the FWF’s tunes that have us falling in love with them. This is a big stage we’re watching this lot on tonight and the big stage suits them. Onwards and upwards, band of the year for sure. If we get another one as good as this then the earth will probably implode with excitement. Screenadelica is a venue that makes you think you’re inside an old prison. Two levels of iron fenced balconies surrounding the hall, one expects a few inmates to suddenly appear slopping out their bowls on the punters below, screaming obsceneties and asking us politely to keep the noise down. This is a fab venue and we’re told it’s not usually one used to the sounds of loud guitars and raucous behaviour. A large community centre more used to holding yoga classes we’re told.

So yeah, again … the Fat White Family … fucking ace. If you don’t believe me get your arse into one of their shows. Ask your mates, the cool ones. They’ll vouch for me here, this band have to be seen.

BAD BREEDING begin to remind us of popular beat combo Eagulls then proceed to remind us of our old favourites Flux of Pink Indians. Shouty, screaming, run around the room kicking over chairs music for drunk but ‘sitting down until the singer knocks you off your chair’ punters. Yep, these get put onto the ‘will see again’ pile.

BLOOD REED SHOES we said we’d see again and we did. They sound faster, sharper and tighter than we’ve ever seen them, but it’s only a glimpse we catch tonight due to the strict, self imposed timetable we set at breakfast time, some eighteen hours ago.

Finally, THUMPERS … look, it’s late, some of us are still very excited about all this stuff happening around this city. Thumpers are ace, unique to the ears and worth putting your pint down to clap along to their infectious tunes. They’ve a debut album out very soon on Sub Pop, which must be the coolest thing for a band like Thumpers to achieve. They’re not a grunge band and they’re not American. In fact, I believe that Thumpers, along with many of my favourite bands at the moment actually live near me in East London. This small fact is brought to our attention more than once today when interrogating those here to entertain us.

According to their press releases this band are yet another duo, however the unique thing about Thumpers is that this “duo” have five members. I don’t understand this at all and one day I’ll investigate and come back to explain. My first choice of location for hunting these people out will be my local pub down Leyton High Rd.

We expect this album will be ace.

Day one … as good as expected … however, some of us are so bloody excited about day two that they simply cannot sleep.