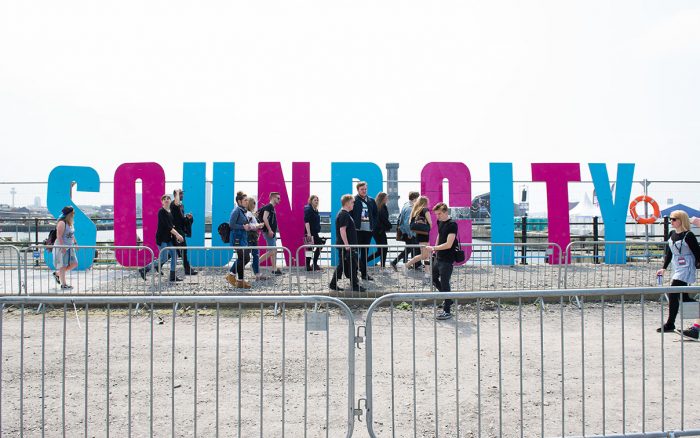 Louder Than War’s James Lowther (words) and Melanie Smith (photos) enter Liverpool’s Sound City festival on Day Two, eager to catch the abundance of music, acts and conversations that the festival had to offer. 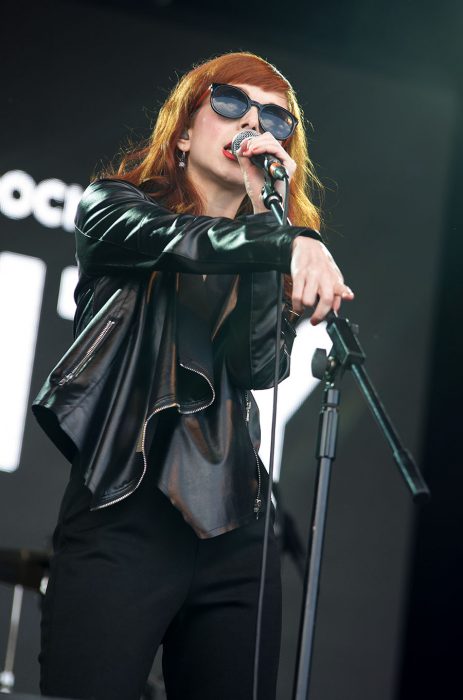 I got to Sound City on the Sunday bright and early. The day started for me with the singer/songwriter Catherine Anne Davis,  known as The Anchoress, an act that has been hotly tipped by Louder Than War for future stardom. It was only her third live performance, so we were even more excited to be able to catch this live show. Occasionally her sound reminded me a little of Marina and the Diamonds, but she played a memorable set and kicked things off perfectly on the main stage. It was such a shame that she was given an early slot in the day as a lot of people missed out.

Mel had started out a little earlier and caught the rocking energetic sounds from Sky Valley Mistress over at the North stage. Bill Ryder-Jones was up next for me, and The Coral founder played a brilliant set. I’d not heard much of his material before but he really won me over, particularly ‘Satellites’, a great psychedelic fuelled guitar-fest of a song.

It wasn’t just about music, though. I’d missed out on a few people in the speaker’s tent (Saturday Sleaford Mods and Paddy Considine, plus Roisin Murphy, Alexi Sayle on Sunday.) but I did manage to catch Seymour Stein, and what a treat it was. The veteran label owner of Sire Records and now Vice President of Warner Records talked through his history with bands like The Ramones, Undertones, Talking Heads, Echo & the Bunnymen and Madonna (to name a few) – he was truly fascinating, and made me wish I had the time to watch a few more speakers. The previous day he had been in the Titanic to sign up Liverpool’s Sugarmen to his label. Luckily Mel, our photographer caught a couple of the other In Conversations in Tim Peaks Diner (photos in the gallery below). 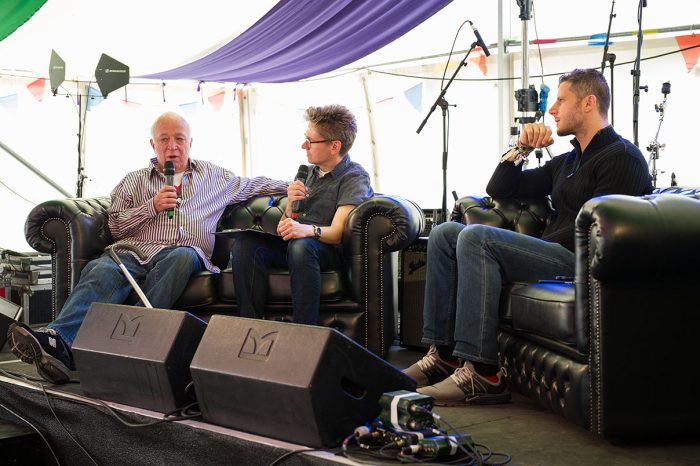 Next up I caught a storming run of what were easily my three favourite acts of the festival. First up was Pink Kink, a local band making big waves. They played a fantastic set, easily living up to the hype ahead of this indie rock girl (and boy) band. Their setlist was great, and I’m eager to hear some recorded material (you can’t find their stuff anywhere online, I hope this changes soon!). Highlights were the manic ‘Bubblebutt’ and closer ‘Stone Me Out’. 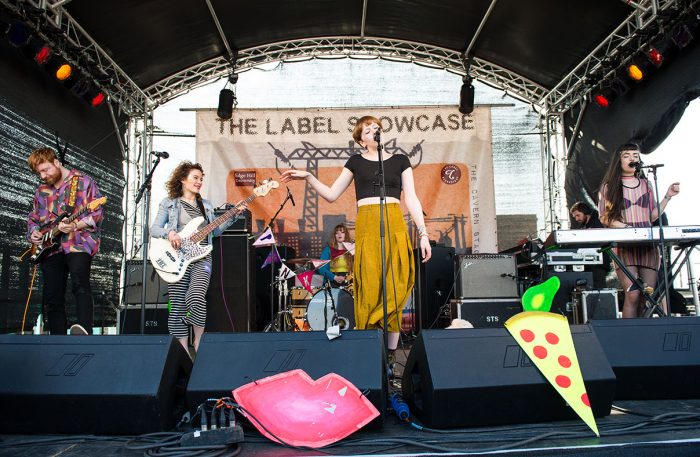 Then there was Laybricks, who were easily the biggest surprise of Sound City Festival. Over at the Cargo Stage, the smallest of the festival, there was a showcase of Korean music, and I thought I’d stay for a song or two as the band were setting up. I ended up watching the entire set and wished they would have played even longer. The young pair from Seoul looked almost like The White Stripes, and played a sensational set filled to the brim with psychedelic pop-rock. The drumming was tight, the riffs mighty and lead singer Kwangmin had an incredible stage presence (“I’m sorry!” He said, “I don’t speak much English!” before “Okay, let’s fucking rock!”) He had the whole crowd singing, jumping and ‘woah’ing along with his set. I’ve not had that much fun at a gig in a long time, and I’m hoping to catch them again at SoFar Sounds in Manchester this month.

Finally there was my most eagerly anticipated act of the festival, The Big Moon. I’d only just heard of them a couple of weeks before the fest, but they quickly cemented themselves as one of my must sees, and didn’t disappoint. Their set consisted of the hits that I’d come to love (including the excellently grungy ‘Cupid’), as well as an absolutely remarkable cover of Madonna’s ‘Beautiful Stranger’. They’ve got the swagger and the personality of a band destined for big things, and I’m looking forward to whatever they do next.

Speaking of covers, next up was the Canadian Dilly Dally who, if I’m honest, weren’t particularly my cup of tea – but by God, they played one of the best covers I’ve heard of fellow-Canadian Drake’s Know Yourself, transforming it into an angsty rock anthem. 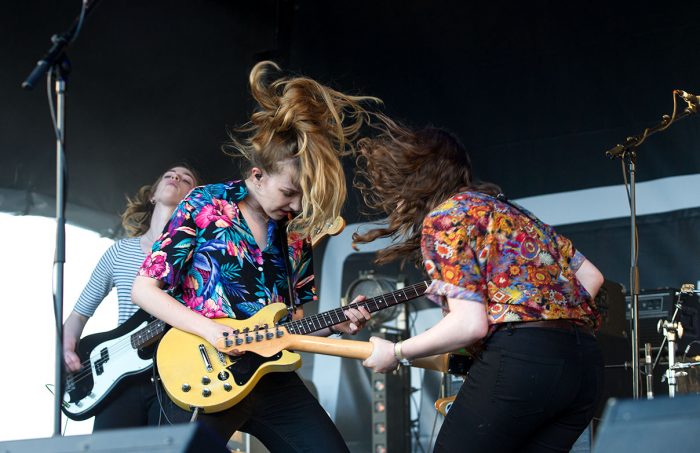 The mainstage had quite a lot on offer on the Sunday, as well. I didn’t manage to catch much of InHeaven or Neon Waltz, but from what I did see and hear, they were incredibly good, drawing huge swathes of crowds away from the other stages. Mel was floating around trying to capture the atmosphere and shooting as many bands as it was physically possible. Artists such as Shura, Kagoule, L.A Foster, Joe Nolan, Red Rum Club, Living Hour, the exuberant Ellie XXE, and Feral Love.

I managed to catch psych-rockers The Dandy Warhols, and I’m pretty glad I did – though (like most people) I was waiting for the anthem that is ‘Bohemian Like You’ – I could see people running to the stage as they kicked into the first few notes of it. Then it was local heroes Circa Waves. Unfortunately their set was cut short due to technical difficulties – something that would become a bit of a running theme throughout the night. What I caught of them was really good, and after the difficulties were sorted they did resume their set. By that time most of the crowd had dispersed, but you can bet they flocked back for ‘T-Shirt Weather’. 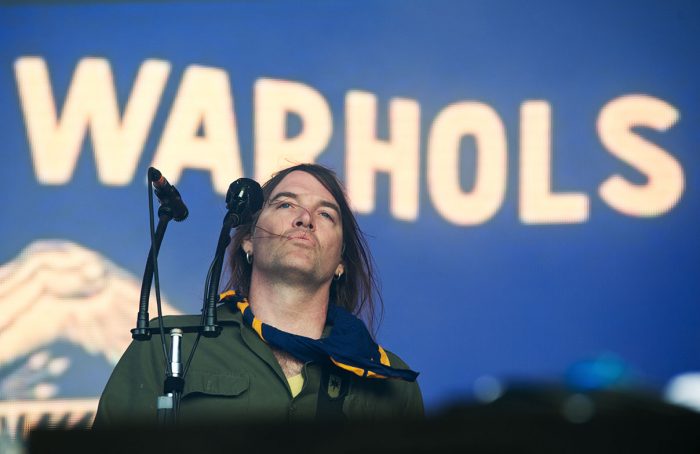 And finally there was Sound City’s headline act, The Coral. These were another act that I was eagerly anticipating, hot off the back of their new album after their long hiatus. Unfortunately, their set was cut short after their first few songs (all of which sounded great, showcasing their psychedelic sound and mighty stage presence) they too were plagued with technical difficulties.

After all the delays it had gotten late, so I thought it best to catch a bit of Peter Doherty on the North stage in the meantime. It proved to be a popular option, and the solo troubadour alongside his musicians (pleased to see he is supportive of female musicians, who were featured heavily in his band). He played a storming set laden with hits from his solo career, The Libs, and Babyshambles.

It was time to go, but as I headed off I couldn’t help but poke my head into the Bowie Disco tent before I left – just in time for ‘Young Americans’ and ‘Ziggy Stardust’. The perfect way to top off the festival. 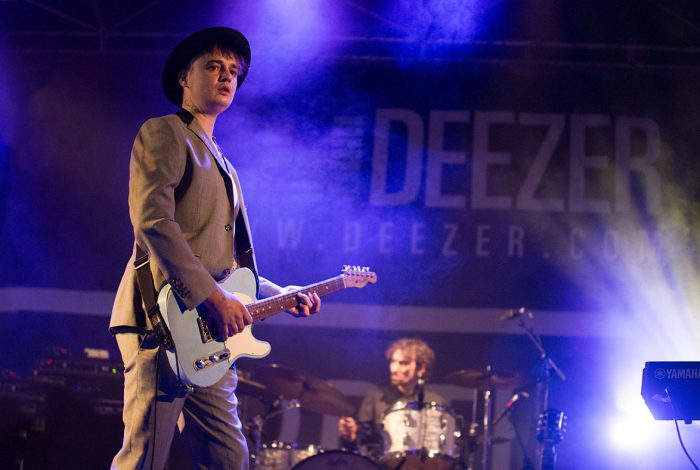 The festival wasn’t without it’s troubles, but personally I had a hugely enjoyable time at Sound City this year, and caught some fantastic artists, and you can bet that I’ll be back there next year. (Catch up on our review and photo gallery from day one here: